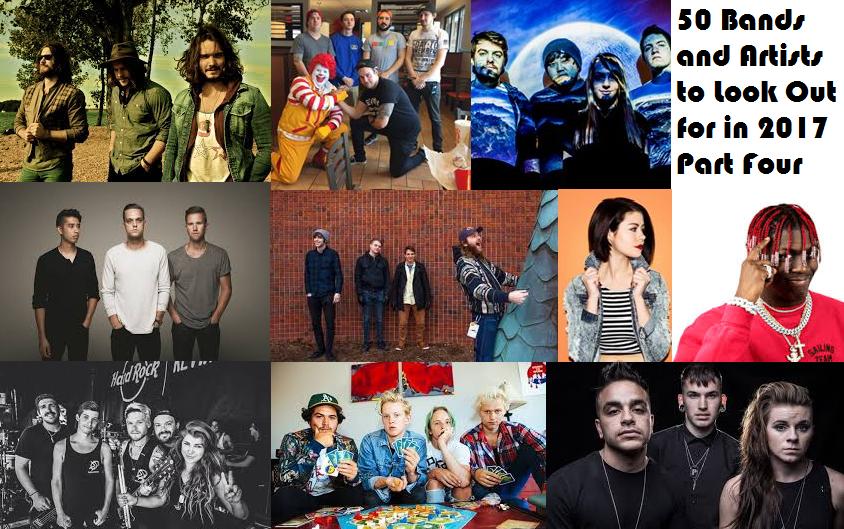 Although a third of 2017 is behind us, there is still plenty of music to come. While most of you might be listening to your favorite bands from years ago, don’t sleep on the up-and-coming talent out there that you aren’t paying enough attention to. Over the course of five weeks, The Record will introduce you to some hot talent primed for a breakthrough from a variety of genres such as rap, metal, pop and others.

For Fans Of: Blackberry Smoke, Highly Suspect, The Virginmarys

If you read my first ever concert review for The Record, then you already know about this trio of cousins from Tennessee. If not, let me reintroduce you to Goodbye June. Forming in 2005, the band, composed of cousins Landon Milbourn (Vocals/Acoustic guitar,) Brandon Qualkenbush (Guitar/Vocals,) and Tyler Baker (Lead guitar,) have been working hard for years and signed to Interscope Records last year, releasing their EP Danger in the Morning in August. With their debut album Magic Valley coming out this Friday, Goodbye June is here to make the rock world listen to them. Face it, if Highly Suspect can break out into the rock scene like they did last year, then so can Goodbye June. I ended my concert review of Goodbye June by saying that Goodbye June is one of the bands to look for in 2017.  I stand by it.

Song to Listen to: “Good Side”

For Fans Of: Bear Hands, A Silent Film, Young the Giant

Let’s admit it: the soundtrack for 13 Reasons Why is killer. If you’ve listened to it, you’ve probably heard the song “High,” a catchy tune from the LA indie pop trio Sir Sly. While being only 5 years old, Sir Sly have done quite a lot in their short time. Their song “Gold” which came from their EP of the same name appeared in things such as the trailer for Assassin’s Creed IV: Black Flag, MLB 14: The Show, and a Cadillac commercial and “You Haunt Me” which came from their debut album of the same name played on alternative radio stations throughout 2014. With their second album slated to come out sometime this year, Sir Sly are hoping to breakout on alternative radio stations this summer. You can see this band and several others at this year’s Alternative Buffalo 107.7’s Kerfuffle on June 17 at Canalside.

Song to Listen to: “High”

Remember when Linkin Park used to be nothing but rap mixed with nü-metal and not just that band that became the soundtrack for Michael Bay’s Transformers movies? Dangerkids remembers those times. Originally signed to Rise Records a few years ago, Dangerkids (sometimes spelled D NGERK DS) grew a small fan base but faded into oblivion on the label. Now on Paid Vacation, the band composed of Andy Bane (vocals,) Tyler Smyth (vocals/rhymes,) Jake Bonham (bass,) Alex Asch (guitar,) and Katie Cole (drums) are here to stand tall and aren’t afraid to go all out. If you long for the days of when nü-metal was awesome, check out Dangerkids.

Song to Listen to: “Kill Everything”

For Fans Of: Green Day, The Orwells, Wavves

Formed in 200, this surf punk band originally was known as the pop punk band Emily’s Army. After they released their EP Swim in 2014, the band switched to a more surf punk style since they thought that there were too many pop punk bands in the world at the time, changing their name in the process. Sounding like a mix between Green Day (drummer Joey Armstrong is Green Day vocalist Billie Joe’s son) and FIDLAR, SWMRS are one band that you shouldn’t skip out on. They’ve played shows with cool bands like The Aquabats!, Wavves, and Rise Against and played festivals such as Reading and Leeds, Warped Tour, and Soundwave. If you like your music mellow yet loud, check out SWMRS. SWMRS will be on tour this summer with All Time Low and will be in Niagara Falls, NY, on Wednesday, July 26, at the Rapids Theatre.

Song to Listen to: “Miley”

Out Now: All We Know Of Heaven, All We Need Of Hell (Rise Records)

For Fans Of: Against the Current, Soft Cell, VersaEmerge

I present to you one of the most underrated acts on this list. This electropop trio has been slowly gaining popularity since they signed to Rise Records (At the Drive In, Dance Gavin Dance, Knuckle Puck) in 2014, the same year they released their debut album White Noise. Within this three-year gap between their debut and their long awaited upcoming sophomore album All We Know Of Heaven, All We Need Of Hell coming out August 4, the trio composed of vocalist/keyboardist/rhythm guitarist Lynn Gunn, lead guitarist/keyboardist Alex Babinski, and bassist/keyboardist Brian MacDonald, embarked on tours with Fall Out Boy, Bring Me the Horizon, and Mayday Parade and embarked in several festivals such as Lollapalooza, Warped Tour, and Summer Sonic. The trio also played Alternative Buffalo 107.7’s Kerfuffle last summer. PVRIS will be on tour this summer with their closest date being July 18 in Toronto at the Budweiser Stage.

Song to Listen to: “Heaven”

Made of past members of Old Gray and Prawn, these Connecticut indie rockers have been gaining some speed since forming four years ago. Mixing pop punk and emo, the quartet has been known as writing very deep songs that will make you feel. Their website states that their newest album, You’re Not As _____ As You Think, is an “emotional bulldozer – an unfiltered, inward look at the last year of the band’s life that’s filled with intimate, visceral details yet remains universally relatable.” On the album’s opening track, “No Halo,” vocalist/guitarist Cameron Boucher’s vocals are somber, haunting, and strangely powerful. If you like to listen to songs that will make you cry yet will tell you everything’s ok, check out Sorority Noise. The band will be on tour this summer with their closest date being Wednesday, June 14, in Philly at the Union Transfer with Forth Wanderers, The Obsessives, and Shannen Moser.

Song to Listen to: “No Halo”

Out Now: The Good in Me – EP (Independent)

It’s hard to stand out in the pop punk scene. With bands like The Story So Far and Neck Deep dominating the scene, new bands are quickly swept under the rug. That’s where music critics like me come in. Enter Mascots: a quintet straight out of Cincinnati. These boys write songs that have raw emotion and catchy riffs. Since forming two years ago, Mascots have played with many talented groups like Sudden Suspension, Tiny Moving Parts, and Hot Mulligan, who you might’ve seen in a previous list. Their debut EP, The Good in Me, dropped back in February, and it’s filled with amazing songs like “Growing Old,” “Altruistic,” and “Draw Your Mind.” If you wanna open up your mind to smaller bands in the pop punk scene, check out Mascots. Their next show is at the Thompson House in Newport, KY on May 12.

Song to Listen to: “Draw Your Mind”

Out Now: Far From Home (Independent)

From our neighbors up north comes New Design, an interesting post-rock group from Brampton, Ontario.  Forming nine years ago, the band composed of Jeffery Lee (vocals/guitar,) Joesph Angilletta (guitar/vocals,) Melissa Angilletta (bass/vocals,) and Zachary Cattapan (drums/vocals,) have been making music the way they want to and according to their Facebook, they’re “too good to be ignored.” The quartet sounds like if old Brand New mixed with the atmospheric sounds of emo legends American Football. Their first album Far From Home came out two years ago, but you can expect their second release to come out soon. The band will be touring the U.S. this spring and will be coming to Buffalo on Saturday, May 20 at Sugar City.

Song to Listen to: “I’ve Never Seen the Ocean”

He’s only 19 and he’s conquering the hip hop scene. Miles McCollum aka Lil Yatchy has been blowing up the hip hop scene since last year with the release of his mixtape, Lil Boat, featuring songs like “Minnesota (Remix),” and “One Night” which gained popularity in the viral video “When Bae Hits You With That ‘So What Are We?’” With a genre composed of mumbled rappers and acts that sound the same, Lil Yatchy is able to sound unique with his sung style of rapping and his unique genre called “bubblegum trap.” He’s also appeared on other artists’ songs like D.R.A.M.’s “Broccoli,” KYLE’s “iSpy,” and collaborated with Carly Rae Jepsen as they covered Rob Base and DJ E-Z Rock’s “It Takes Two” for discount store Target’s fall clothing camapign. He also appeared in a Sprite commercial with Lebron James and is the face of the new Nautica and Urban Outfitter collection. You probably saw him headlining this year’s Springfest. His debut album Teenage Emotions comes out May 26 and features collaborations with Migos, Diplo, and YG.

Out Now: With or Without Me – Single (MR. BIG TIME’S JAM FACTORY)

For Fans Of: All Time Low, Paramore, We Are the in Crowd

When pop punk band We Are the in Crowd announced a hiatus back in February of last year, fans have been waiting for news about what could be new for the group. Later that year, news finally surfaced that vocalist Tay Jardine, bassist Mike Ferri and guitarist/vocalist Cameron Hurley were starting a new project called SAINTE. This band focuses more on Jardine’s vocals and contains a pop style that sounds like Paramore’s self-titled era meets Hey Monday. SAINTE still contains that pop punk style that WATIC are known for, but focuses a lot more on the pop aspect. Hopefully pop stations across the country pick up on the beauty that is SAINTE.

Song to Listen to: “With or Without Me”