Bengals get back in the win column, sweep Blue Devils 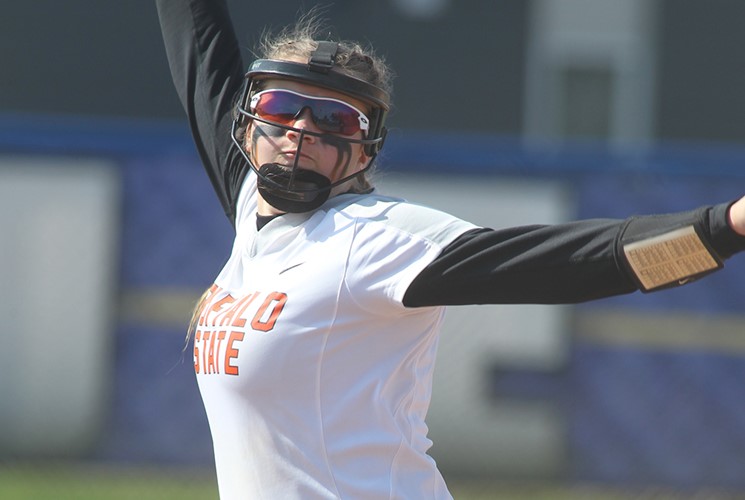 Pitcher Allie Block led the Bengals to two dubs on the road on Friday.

Sophomore Allie Block was on the hill again for Buffalo State softball, and she brought her A-game on Friday afternoon in Fredonia.

It all started in the top of the first inning when junior Danielle Szymkowiak, Block and freshman Kaylee Lynch all drew two-out walks. Sophomore Cassandra O’Hern took advantage of the bases-loaded, two-out situation. She singled to right field, scoring Szymkowiak and Block.

The Bengals were able to push one across in the second. After junior Melissa Woods reached on a fielder’s choice, she reached second on a wild pitch by Blue Devils’ starter Katie Yudin with sophomore Emma Ruggiero at the dish. With a runner in scoring positon, Ruggiero was able to single and plate Woods.

In the fourth, Block got into some trouble. She was able to retire the first two batters of the inning, but gave up a walk to Khee Nance. Mallory Mecca was able to single to right field. Nance used her speed to fly all the way to third. Lauren Pixley picked up the first RBI for Fredonia as she singled to center, scoring Nance.

Block got into more trouble in the sixth. Katelyn Dennis homered to center to give Fredonia a booming start to the bottom half of the inning. Nance was after and she was able to reach after an error by O’Hern at shortstop. Nance showed off her running ability again as she was able to steal second and later found herself on third after a wild pitch. With Pixley at the dish, Blue Devils coach Tony Ciccarello called for a squeeze. The squeeze was successful as Pixley got the bunt down and Nance scored.

Entering the seventh, the score was knotted up at three, but the Bengals were hungry to end the game before they had to play extra innings. After senior Laura Crooks went down swinging, Ruggiero and Szymkowiak had back-to-back singles. Then Block was able to reach after an error by the third baseman.

With the bases loaded and one out, the freshman Lynch came in clutch as she singled to break the tie, plating Ruggiero. O’Hern followed and earned an RBI the hard way after getting plunked as Szymkowiak crossed home. Sophmore Emily Frajdofer picked up an RBI as she hit a sacrifice fly to center. Block tagged up to score while Lynch tagged and went to third. O’Hern stayed put at second. Bengals coach Marie Curran-Headley rolled the dice herself as she called for a double steal. O’Hern was able to swipe second and Lynch swiped home.

With a four-run top of the seventh, Block was able to retire the Blue Devils in their last licks with a 1-2-3 inning to win game one of the doubleheader.

In game two, Block went back to the bump and was dealing.

After getting a run in the top half of the first thanks to a Lynch RBI, Block was in control. She gave up only four hits in game two, going the distance once again. Yudin was able to get two hits off of Block in game two while Sam Seegar and Pixley each had one hit. Block was also able to strikeout six while facing five over the minimum in a very low-scoring 2-0 win in game two.

The Bengals were able to get an insurance run for Block in the seventh thanks to a Woods single which plated sophomore Victoria Rigler.

With 12 games left in the regular season, the Bengals find themselves in fourth place in the SUNYAC standings with 10 points.