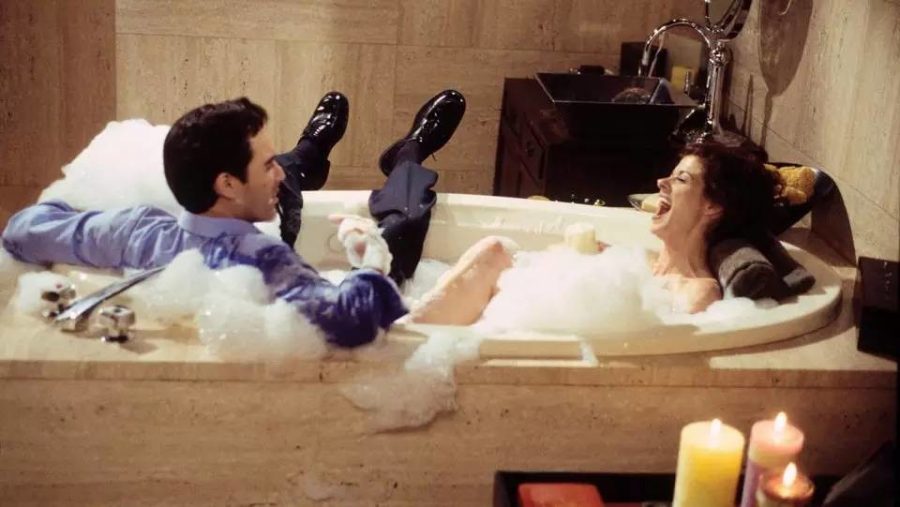 Still from NBC's "Will & Grace"

Through the relationships of characters on the shows, sexuality and the idea of sexual expression can be captured. The sitcom The Adventures of Ozzie and Harriet is about the life and times of the Nelson family. The relationship between Ozzie and his wife Harriett mirrors sexuality in the time when people were heterosexual, married, and sex as an act was used purely for reproduction.

One chapter in the book Deviations by Gayle S. Rubin talks about how from the 1940s to the 1960s there was a sexual caste system. On the top of the caste system were people that were considered part of that “Ozzie and Harriett” lifestyle. After that came much of what is considered normal to sexuality now.

Many pieces of modern sexuality were demonized then. People date without the prospect of marriage, people are open about their fetishes, and other sexual deviations from the norm at that time are currently viewed as part of the norm.

Soon came The Mary Tyler Moore Show which actually prided single woman to date as well as to have casual sex. A show that is unable to be a contender for this is That Girl starring Marlo Thomas.

That Girl was more focused on the idea of the working girl instead of the idea of being single. However, the show’s main character was in a committed relationship throughout the entire series, but lead star Marlo Thomas did not want to imply marriage was the ultimate goal for young women, as she believed that would undermine the somewhat feminist message of the show.

One notable moment in sitcom and television history was the first ever primetime gay kiss, which came to us courtesy of ABC’s show, Roseanne. The sixth season episode “Don’t Ask, Don’t Tell” showed Roseanne getting a passionate kiss from her friend Nancy’s girlfriend. Though this was major moment for the LGBTQ community, it was done for the wrong reason.

This episode was during a time when the show’s ratings were under evaluation, something that would have determined whether or not Roseanne would get renewed for a seventh season. As history goes, the show went on to have nine seasons and that kiss is remembered in history.

Now we live in the era of Will & Grace, a sitcom that aired on NBC during the late 1990s to the early 2000s. This show was well known when the LGBTQ community was on the rise in the world. This show was also able to stop stereotyping the idea of being gay. By this I mean that it was able to deviate from the stereotypical portrayal of gay men.

One of the lead characters, Will Truman, was a gay man not as flamboyant as the other male lead, played by Sean Hayes, Jack McFarland. The character of Will did manage to show that he was gay from time by expressing many stereotypical gay traits such as loving Lisa Minelli, breaking into song and dance at random and speaking in a higher tone of voice.

Another notable example of a sitcom breaking away from the stereotypical portrayal of gay men is Carter Haywood, played by Michael Boatman, on the ABC sitcom Spin City. He was hired in the pilot episode of the series as a part of damage control on Mike’s behalf; at times it is often difficult to remember that Carter is gay.

The last sitcom to demonstrate the evolution of sexuality comes from 2 Broke Girls. While this show is known for the saucy attitude of the character Max and the comments it makes about certain communities, nothing compares to the episode where the girls manage to offend the gay community.

In this episode Max and Caroline are filling a large order for a person named I. When I finally arrives to pick up the order it is revealed that this person is gender fluid but wants to alter the cupcakes in a way that offends Max. Max then says, “We cannot sell cupcakes to you,” leading to a large protest being held outside of the cupcake shop.

Though sitcoms often portray relationships not working out, or failing in some insane manner, they also manage to capture the realism of relationships. Sitcoms have also managed to capture the changes in sexuality and have expressed that sexuality has become more freeing. People are able to be “sexual deviants” and aren’t viewed as if something is inherently wrong with them.