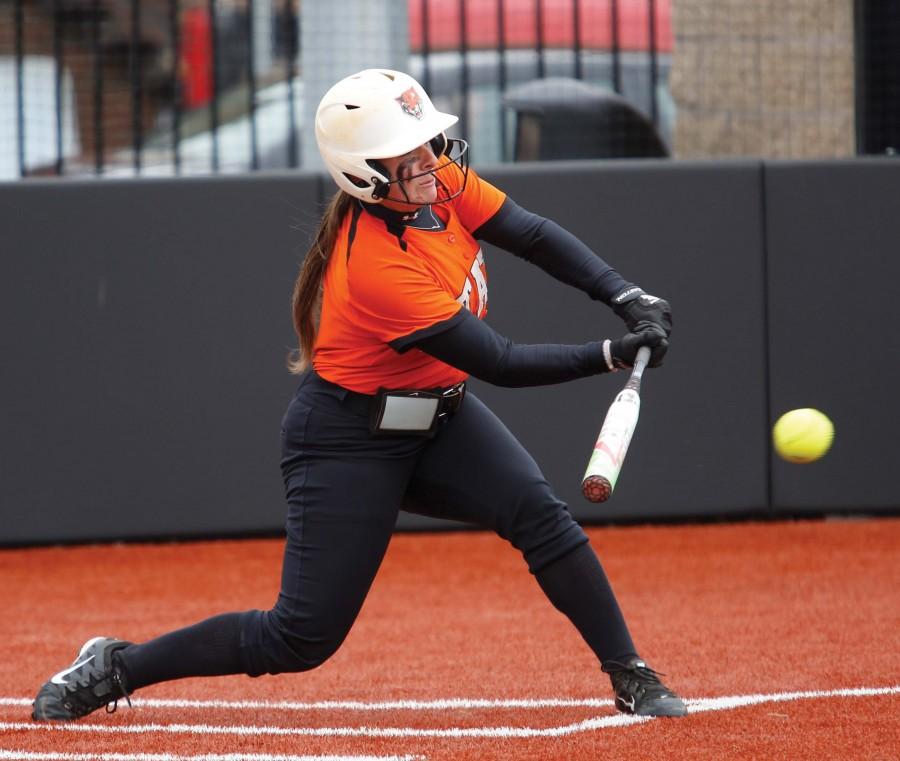 Buffalo State will host Oneonta for a double header April 10 with the first game at 11 a.m.

After falling to defending SUNYAC champion Cortland and having a couple of games postponed against Oswego, the struggling Bengals found themselves playing the struggling New Paltz Hawks in a neutral site game.

The Bengals split the series 1-1 by the scores of 1-4, 4-2, respectively. However, Buffalo State held its lead in Game 2, the first time since March 25 the Bengals had a lead.

In Game 2, the Bengals were able to secure their first win in SUNYAC play in the season in Fredonia, Sunday.

In the opening game, runs came early. A lead-off single by Taylor Leonette initiated a rocky beginning for sophomore Allie Block on the mound for Buffalo State. Leonette got to second on a wild pitch during Taylor LaFrance’s at bat. After LaFrance went down swinging, Leonette stole third base and Lauren Capello was able to drive in the run for the first tally of the game with an RBI triple. After giving up a walk to Fallon Spriggs, she stole second base and Capello scored from third on the throw.

Block gave up a walk to Shannon Fee. The following batter, Nicole DeCosta, then doubled to left field while Spriggs scored and Fee reached third. Julia Perhacs then ground out on a come-backer to Block and Fee scored on the play. Block eventually got out the inning, but not before the Hawks hung four in the first.

The Bengals got one back in the bottom of the first inning, though. Sophomore Emma Ruggiero had a lead-off double to left field and got to third on a ground out by senior Laura Crooks. Junior Danielle Szymkowiak flied out to left field and Ruggiero tagged up to plate a run for the Bengals.

That would be all the offense in the game for both teams. Both Capello and Block settled down after giving up runs in the first. Block ended up pitching a complete game, allowing four runs on four hits with five walks and three strikeouts in a losing effort.

Things started to look bleak for the Bengals in the second game of the doubleheader. Again, as LaFrance was hit by a pitch by Block, who also started the second game for the orange and black, LaFrance would eventually come around to score after a fielder’s choice and a single by Spriggs. Block got out of any other looming danger and got out of the first down just one.

In the top half of the second inning, Caroline Alicandri hit one to sophomore Cassandra O’Hern, who was unable to field it cleanly and was charged with an error. After a Leonette single, Alicandri was plated after a LaFrance single, making it an unearned run.

In the bottom half of the inning, the bats came alive for the Bengals. O’Hern reached on an error committed by Alexa Mastando at third base. Block tried to help her own cause as she singled down the right-field line. Block then stole second, so with O’Hern at third and Block at second, the Bengals had something cooking.

Kaylee Lynch was able to serve up a dish as she ripped right up the middle. O’Hern and Block scored a pair of unearned runs to knot the contest up at 2. During Nicole Adams’ at bat, DeCosta and LaFrance teamed up to catch Lynch trying to steal. Nicole Adams eventually walked. After Abijah Adams popped out, Melissa Woods was able to drive in Nicole Adams with a RBI single to give the Bengals the lead.

This lead was not meant to be relinquished.

In the third inning, the Bengals added an insurance run as Szymkowiak singled up the middle to plate Crooks, who singled and stole a base earlier in the inning.

Block looked a lot better in the second game than Game 1, picking up the win despite giving up nine hits. She pitched another complete game, seven innings, allowing two runs, one unearned with three strikeouts and three walks.