My thoughts on the reaction to the UB April Fools’ article 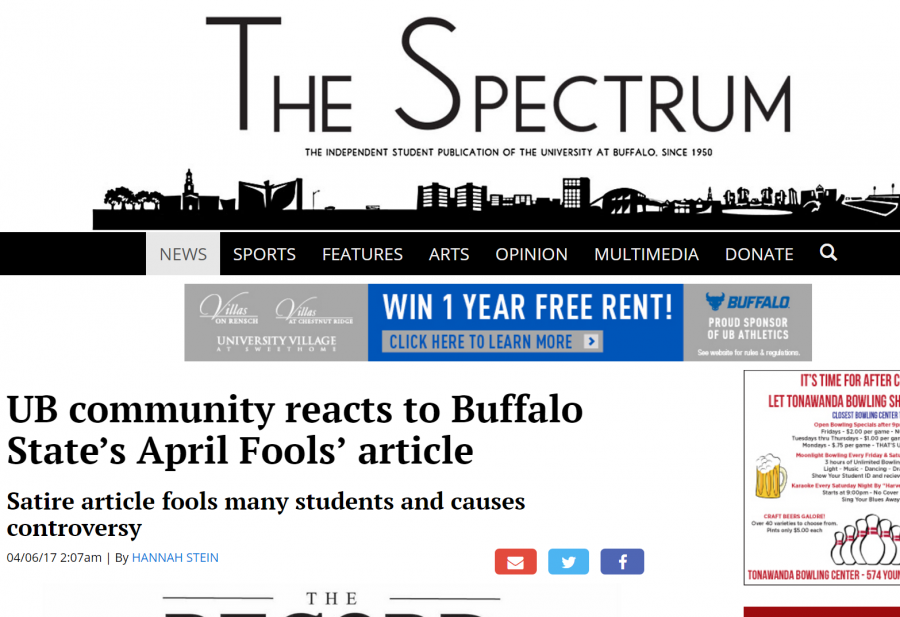 I have waited almost a week to post my thoughts on the reaction to my April Fools article for The Record, “UB declares independence from SUNY, gets rid of in-state tuition rate”. I wanted to give those who wanted to a chance to respond to the article before I made a public comment about the reaction of the article.

When I began to think of what I wanted to do for this edition my ideas were endless. I started working on this in mid-March and came up with four stories that were published in the edition. I was proud of all them. They were timely, funny and appropriate in their own special way. Honestly, I didn’t think this one would end up being the big hit out of the four.

One of the stories I came up with was this article. I knew pretty early I wanted to do a fake news story on UB. I know many people who attend the institution and interact with many students. I wanted to do a story that would poke fun at the loose reputation that UB has been given by students and locals as a research institution and large university in WNY and the SUNY system.

After days of brainstorming and writing, this is what I came up with. I thought it hit on a few stereotypes that people have about UB. When I was finished, I was (and still am) proud of the piece. I believed that many people would be initially alarmed by the story, but eventually come to the realization that it was an April Fools’ joke.

I have been proud and shocked at the amount of attention the story has received.

When story was first published on Saturday morning, I was happy with reaction I was getting out of people who mistook the story as truth and not an April Fool’s joke. I had gotten a strong reaction to the story from people whom I did and I didn’t know and was proud of the ‘trick’ I had pulled off. On Sunday, I had received some emails and saw even more comments across social media that more people had taken the story as absolute truth, causing some panic and many felt it was a “cruel joke” if fake. We had even been asked to put that it was an April Fool’s joke at the bottom of the story. My feelings about the story never changed. I am proud of the 47K views the story received.

As of today, many still believe this was a “cruel joke”. I did not and never will think that this fake news story was a “cruel joke”. While, the story mistakenly had the date March 30th, the story was not published and posted on social media until April 1st. Also, this story had a fake quote from a ‘UB student’ about the five-cent toll for entering buildings. This should have been obvious to any UB student or really anybody else as that this is unheard of. This combined with the fact that this information was not anywhere on the internet, should have made it clear it was an April Fool’s joke.

I also take issue with comment that suggested that if I wanted to make a joke about tuition, it should have been made at my own school. I believe this is why the article was so effective because it was about UB. I don’t think there would have been nearly as much reaction if I made it about Buffalo State or any other SUNY school. The matter of tuition was part of the UB stereotype I was poking fun at.

Let me be clear if this was real news, The Record would be one of the last media organizations in the area to know. The four local TV stations, two radio stations and major newspaper would be all over the story.

I believe that this should serve as a lesson about media literacy. America ranks among the lowest in media literacy. We have none to very little media literacy education in our schools, I didn’t have any real media literacy taught to me until this past fall. This situation shows why that’s a problem. After reading the reaction article from The Spectrum​ I am glad to hear that this will be used as educational tool for professors at UB to “show students why a healthy news diet is essential”.

I may not agree with everything that the reaction article says, but I feel it was a fair and balanced. I’m happy that the article was written and will not do anything to shy away from it.

I would like to thank our executive editor Dan Almasi​ and The Buffalo State Record​ staff for having my back throughout this ordeal. Getting criticism is something that comes with the business. We have handled this with class.

I imagine many of you were looking for an apology of some sort and after reading this you still may think I am cruel for writing the article, but I am not sorry for writing a very convincing April Fool’s joke.

Link to The Spectrum’s reaction story