‘Ghost in the Shell’ is hollow, Hollywood fodder 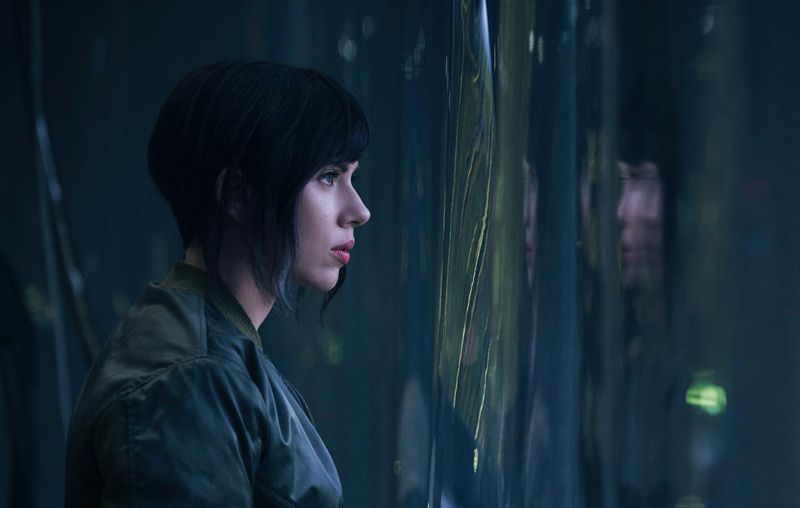 Scarlett Johansson stars as The Major in 'Ghost in the Shell'

Science fiction is a tricky craft.  On one hand, it evokes themes that make you question your own humanity.  On the other, it can just be a ploy to display big budgets with over-the-top style.

Ghost in the Shell falls into both categories.  This makes the film like it had a cohesive narrative with some failures intermittently strewn throughout, but that isn’t the case.  Reviewing Ghost in the Shell is going to be the tale of reviewing two movies.

The film is supposed to be a live-action remake of the 1995 Japanese anime film of the same that, that, in itself, spawned a entire franchise the likes of which big studios executives can only drool over.

This new version diverts from the source material to great lengths, although keeping some of the same things that made the original so memorable and influential.

We are first introduced to Major (Scarlett Johansson) as she is being made out of computer parts, but implanted with a human brain.  Something that her “boss” claims will make her the greatest weapon known to man, not just a typical robot (this is really going to become bothersome later).  The Major is a cop who is given the task, along with her teammate, Batou (Pilou Asbæk), is given the task of taking down a computer hacker who is able to hack into people’s “ghosts” (this is in reference to the spirit that a human-like “shell” can inhabit).

I’m going to stop here for a moment.  With only these as the plot points, I was enthralled and ready to claim this as one of the great movies I have seen this year so far.

The visuals alone, dare I say it, made Bladerunner look like 2-D cardboard cutouts.  It built its own world from the ground up.

When I saw how the advertisements in the film were displayed, I was wowed in that it seemed that the movie was able to pinpoint exactly the way our society functions in the internet age.

The movie made me realize that wed don’t function by just being reliant on technology, but that technology really has morphed into a part of us and will continue to do so where people don’t even have to talk verbally to one another while moving their lips.

The inter titles at the beginning made a statement about how the line between humanity and robotics is blurred in this dystopian future and the movie made me think that this is the road we were bound to head down.  Then I realized that the greatest sci-fi is one that makes you think about your own existence.

But not only that, we also get this stylized neo-noir thriller.  We are in the dark, seedy, underbelly of clubs trying to find this hacker.  How long has it been since we saw a movie like this?  Bladerunner was the first to do it, then Ghost in the Shell was thirteen years after that, and The Matrix was another four years after that.  I’m sure there are the others, but these are the landmarks of such a genre and I really thought this Ghost in the Shellremake was going to end up in such a cannon.

For a while, Ghost in the Shell, to me, was the only remake that justified its existence.  In the age where nearly every movie release is a sequel, remake, reboot, or reimagining, there are so many movies that get released just for the purpose of existing.

Take Beauty and the Beast released two weeks ago.  The movie is a shot-for-shot remake of a far superior animated film.  It was commissioned for the sole reason that Disney film execs want to remake all their animated films as live-action.  There is no sense of timeliness or intrigue in audience relatability, but it exists just for the mere fact that somebody wants it to exist.

Ghost in the Shell, however, justified its place at this time in theaters.  It’s a sci-fi movie for the information age that deals with themes and consequences we are so familiar with today.  And I thought it was brilliant to have the villain, the hacker, speak with an outdated computer’s voice.  A stroke of genius in a film whose central theme was always man’s relation with technology and how fast things are advancing.

This was the case, at least, for two-thirds of the film.

Without spoiling anything, I will tell you who are familiar with the original that this remake does have the pivotal scene with Kusanagi (the original Major) and Batou on the boat.  In the original, this is used to explore character’s motivations and ask questions of the blurred lines between humanity and robots.  I was excited to see how they handled it.

They do this by skipping right over it.  I was willing to forgive this misstep, having seen the first part of the film.  But from there on out, you can feel the seething pulse of higher studio execs and their market research telling the writers to wrap it up with a story that it familiar.

Generic action fodder is the end result with the typical corporation vs. human story we have seen thousands of times.

I walked out of Ghost in the Shell angry.  I had been robbed.  A film that was gritty, stylish, with great ideas and a sense of belonging in place and time was hacked by a studio who most likely saw that this was the case and thought audiences might be confused.  I saw a lack of respect for audiences’ intelligence at this.

Familiarity is okay, but when I go to a movie, especially a sci-fi movie, I want to be challenged.  I want my intellectual capacities to be sparked for conversations about the nature of humanity and to dwell on my own life for a bit.  I get that every single time I watch 2001: A Space Odysseyor Bladerunner.

But Hollywood is so keen on keeping people unharmed to sell tickets that they continuously will degrade and demean their audiences to numbers and statistics and give them happiness.

When Get Out was released earlier this year, the sense was that studios may have been more willing to take a chance.  Here was a fresh, original horror movie by a first-time director of the genre.  What we got was a rousing success, both critically and commercially.

Unfortunately, Ghost in the Shell was in post-production at that point and could not be saved from itself.

Now, I’d be remiss if I didn’t at least discuss the controversial casting of Scarlett Johansson as Major.  What was more offensive for me was when I realized that they had changed the name of Kusanagi to just Major, the ultimate washing with white people.  But I never had a problem with Johansson’s casting.  When you compare Johansson and the original design of Major Kusanagi side-by-side, there are similarities between them that would make you question whether a Japanese actress really would have been more ideal.

The problem with Johansson also lies in her performance.  I can defend her in the fact that when an actor takes on the role of a robotic being, they may have to sacrifice personality traits that would define most human characters.  However, I can’t defend Johansson as the grizzeld bounty hunter that is the Major.  She is supposed to walk around like a seasoned cop, straight laced and hunched over.  You can see her really trying, which is not something you want to see in an actor’s or actress’s performance.  You are supposed to leave the curtain up to hide the man (or woman) behind it.

Johansson can and has played badass women before.  She was great in Lucy and is quite famous now as Black Widow in the Marvel cinematic universe.  Here, she is supposed to be stiff, which is not one of her strengths.  She is elusive and sleek in those other roles and is better off when taking on those qualities.