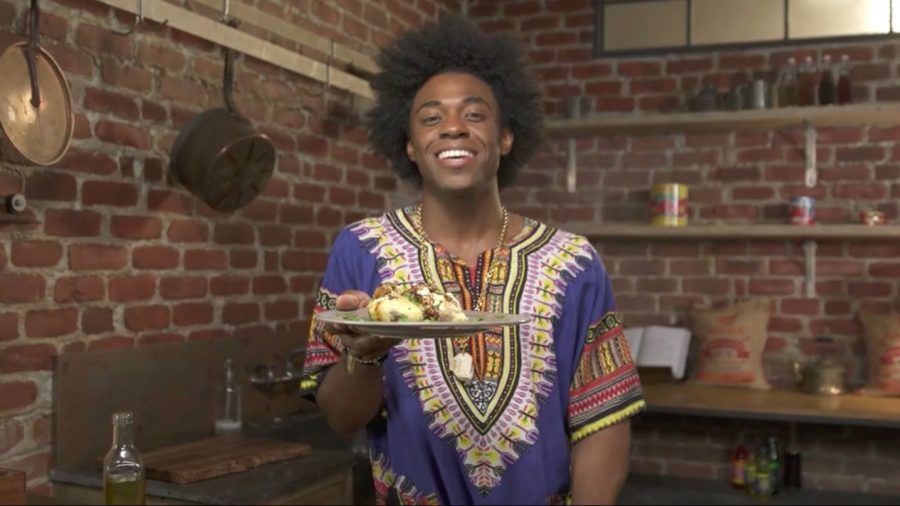 Chef Lazarus Lynch showing off a plate of stuffed plantains.

It has been one year since Lazarus Lynch has walked the campus of Buffalo State.  In that time, he has become an internet food sensation, branding his own brand of cooking with soulful family influences.  Chef Lynch was gracious enough to devote some of his time for an interview with The Record.

So, first things first, we just want to congratulate you on your victory on ‘Chopped.’

Well, thank you guys.  It was a lot of fun competing.

People on the show always talk about how it is so much more intense being in the kitchen than it looks on TV.  Is that true?

I have to agree with that.  People don’t get how TV works.  There’s always that energy in the kitchen, but  producers are always pulling you out to ask your opinions and for interviews right in the middle of everything.  It’s totally unpredictable.  But its just like it looks.  One thing that people may not know who watch the show is that even though we only have to give three judges a taste, we actually have to make 4 plates.  The fourth plate is what is called a “beauty,’ which is your best looking plate.  That’s what’s used for the closeups.

Even though you won this episode, you are still in the running for a $50,000 prize.  You think maybe you can give us a preview of what’s to come?

Unfortunately, I can’t give you the names of the other competitors, but I will say that I am going up against some heavy hitters.  The others are really talented individuals who are really passionate about the charities they are competing for.

So even though you would be donating your winnings to charity, what would you have done with $50,000 if you weren’t to donate it?

Right off the bat, I just want to say I am competing for the 4-H program, which put me through college which allowed me to get to where I am today.  With that being said, I would probably use the money to put back into my business.  The videos I do are out of my own pocket.  When you have a business, you need a lot of cash on hand.  Then again, maybe I’d take a vacation, too.

Did you ever think you would end up on TV while you were here at Buff State?

Actually, I studied to become an actor or an artist of some kind.  [I studied communications here] and I spent a lot of my time in the dance studio or painting or on stage.  Food really wasn’t always the goal, but then I went to culinary school and everything changed.

Do you consider food and cooking performances or pieces of art on their own?

Absolutely.  What I do has to appeal on a visual and beautiful level.  My goal is to make the customer salivate before they eat what I cook.  There’s a different accountability when it comes to cooking versus when I paint because when you cook you have to finish whereas painting you can continually return to it.  You have to follow through with cooking.

You have a cookbook you’ve been working on for a while soon to come out.  Is ‘Chopped champion’ going to be added to the cover?

*Laughs* That would be crazy!

What can we expect from the cookbook?  What types of recipes are you including?

So, my brand is soul food and comfort food.  However, I also want the book to be inclusive of other types of food as well.  I also want to include personal recipes as well.  My father owned his own restaurant and my mom was a great cook as well, so I have recipes in there from my childhood that I remember.  I also want to try to put a new spin on soul food, too.

What were some of the best eats you had while you were at Buff State?

I used to work at Sato making ramen.  That was a place I loved to go.  India Gate is excellent.  There was another Ethiopian place on Grant and Amherst, something like Miss Ethiopia, not sure if it is still there.  There’s some places downtown like Buffalo Proper that have such good food.  Allentown Burger Venture! I swear to you I would go there once a week because they have the best poutine fries.

How about the best chicken wings?  You have to have an expert opinion on that.

I am the wrong guy to ask that.  Sorry.  I went to Anchor Bar once and it was only okay.  Although I did go to the Buffalo Wing festival one year and tried a ton of amazing wings, but I couldn’t put one spot over another based on that experience alone.

Do you think you can give the starving college kids at Buffalo State a quick, cheap, and easy recipe that has a bit of gourmet appeal?

Boil up one of those cheap ramen noodles packets and separate the noodles from the broth.  To the broth, add Sriracha.  By the way, Sriracha is a condiment everyone needs in their arsenal.  Steam up some frozen vegetables, fry up some bacon and eggs and combine.

Best of luck to you in the upcoming competition.  We’ll be rooting for you.

Thank you guys so much!

Oh, and let us know when you decide to make a run at Bobby Flay.

Funny enough, just to add to that, Bobby is a mentor to me.  I am actually going to be a judge on the show, although I am not sure when that episode will air.

More information on Chef Lynch can be found on his website sonofasouthernchef.com.  Lynch is set to make his appearance in the $50,000 round April 25, which will air on Food Network 10 p.m.