Bengals hold their own against teams transitioning to D-II 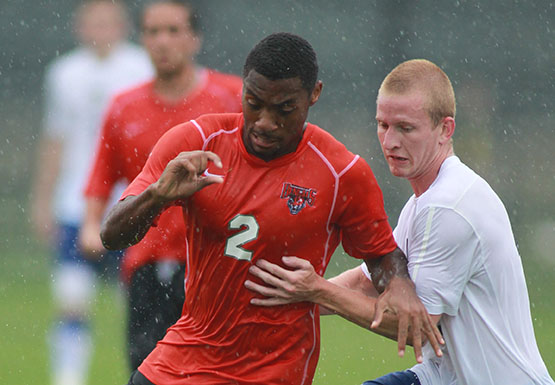 The Bengals beat Roberts Wesleyan, 2-1, on Wednesday before falling to Daemen, 2-1, in overtime on Saturday.

Both teams held an advantage in size over Buffalo State (2-3-1), but the Bengals’ speed played a huge factor against Roberts Wesleyan.

“We were not intimidated,” senior captain and defender Anthony Appiani said. “We embrace the challenge to play against teams who are able to offer (athletic scholarships) to players and to prove to other teams that we have a good squad.”

C.J. Scirto played a strong game in the win. He moved the ball up field and fed his forwards very well to get key shots on goal.

“With the formation we use it is important that (Scirto) has strong games to help the lone striker,” junior midfielder Jon Commisso said.

Buffalo State started out the scoring just before the end of the first half. Forward Keegan Lezama scored in the 44th minute on a strong shot from just outside the box that sped past Redhawks’ goalkeeper Stephen Buscaglia to put the Bengals on the board.

The Bengals outplayed Roberts Wesleyan in what proved to be a testy second half. Frustration spilled over when Buffalo State’s Dylan Ross and the Redhawks’ Derrek Holmes got into a shoving match after fighting for a ball in the corner on the Roberts Wesleyan end of the field.

Roberts Wesleyan freshman forward Taiwo Aderounmu then scored in the 57th minute to tie the game at one.

The Bengals’ offense started clicking again halfway through the second half. In the 63rd minute, it looked as if the tie was going to be broken after Scirto lofted a corner kick to Appiani, who headed the ball perfectly. The ball appeared to be heading into back of the goal, but Buscaglia made a tremendous save with his left hand to keep the game tied.

Three minutes later, Buffalo State finally broke the tie when junior Francesco Cardillo scored in the 66th minute. Scirto sent a long ball in on goal and Cardillo took advantage of a poorly judged effort by Buscaglia, as he put in the rebound to score what ended up being the game-winning goal.

Although the Bengals did win the game, they were dealt an injury. Senior defender Brandon Simoncelli was injured in the first half, which forced Lezama to move to defense.

“(Lezama) had been playing the defensive role to begin the year,” head coach Mark Howlett said. “We have some depth in that position so we wanted to push (Lezama) back.”

Against Daemen, Buffalo State did force overtime but was unable to come out on top. After Daemen broke the scoring in the 26th minute, junior transfer Dylan Ross scored his first goal as a Bengal in the 80th minute to make it 1-1.

Daemen’s leading scorer Kyle Clifford scored the game-winning goal in the 97th minute to give the Wildcats the overtime win.

The Bengals’ next game is Saturday at D’Youville. Kickoff is scheduled for 7 p.m.

Joseph Sarro can be reached by email at [email protected]