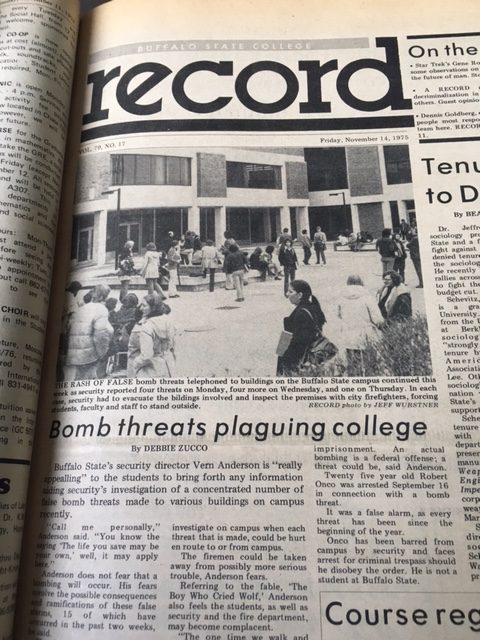 As printed: "THE RASH OF FALSE bomb threats telephoned to the buildings on the Buffalo State campus continued this week as security reported four threats on Monday, four more on Wednesday, and one on Thursday. In each case, security had to evacuate the buildings involved and inspect the premises with city firefighters, forcing students, faculty and staff to stand outside."

The last reported bomb threat at Buffalo State was back in 2001, according to Peter Carey, Chief of University Police.

But in 1975, there were 15 – yes, FIFTEEN – bomb threats reported in a two-week period, including four in one day alone. All 15 were deemed false alarms.

Perhaps the fact that such threats are less commonplace today is in part thanks to the fact that in 1999, school bombing threats became a felony in New York State. At the time, they were a class B misdemeanor — still a serious offense, but not nearly as much so as a felony.

The way in which these threats were handled in ’75 would likely be considered irresponsible today. A bomb threat today shuts down an entire school, at least for a day. Back then, only the building reportedly containing a bomb was evacuated. And even then, students and faculty — according to this story — stood outside the building until it was cleared by UPD and firemen. Uh… yikes. I’d be as far away as I could get by the time the building was deemed safe.

Here’s the full story – ‘Bomb threats plaguing college’ published in a Nov. 14, 1975 issue of The Record:

Buffalo State’s security director Vern Anderson is “really appealing” to the students to bring forth any information aiding security’s investigation of a concentrated number of false bomb threats made to various buildings on campus recently.

“Call me personally,” Anderson said. “You know the saying, ‘The life you save may be your own.’ Well, it may apply here.”

Anderson does not feat that a bombing will occur. His feats in involve the possible consequences and ramifications of these false alarms, 15 of which have occurred in the past two weeks, he said.

The latest bomb threat was received yesterday four minutes before classes were to begin. At 7:56 a call was received by the security office saying a bomb was placed in Ketchum Hall.

Four bomb threats were called in on Wednesday. The Communications Center, Ketchum Hall and Classroom Buildings were evacuated in quick succession as a result of the mass of calls received between 1 and 1:30 p.m.

The last call made Wednesday was received at the security office at 11:08 p.m. and was directed at the Tower II dorms.

Calls received Monday were all made by males whose “terminology was close,” said Anderson. They could have been from the same person, he said. Tuesday was the only day this week when calls were not received.

“The campus had nothing in the way of crime prevention yesterday (Monday),” said Anderson.

“My fears are that Buffalo firemen, who are required to investigate on campus when each threat is made, could be hurt en route to or from campus.”

The firemen could be taken away from possibly more serious trouble, Anderson fears.

Referring to the fable, ‘The Boy Who Cried Wolf’, Anderson also feels the students as well as security and the fire department, may become complacent.

“The one time we walk and not run will be the real emergency,” he said.

Anderson is concerned about students’ lack of responsibility for their own safety.

Those who make threatening calls “have to brag,” said Anderson. “That’s why someone out there knows.”

Anderson said he can’t draw a conclusion at this point because he hasn’t had time to study the situation. Three possible, assumptions, he said, involve

– a fad concept where because one person does it, others follow
– an irate student attempting to seek revenge
– the fact that at exam time pranks such as these occur in proportionately large numbers

“It’s commonly accepted around the country. It’s a ploy to get out of an exam,” said Anderson.

Security’s approach toward the investigation involves taping incoming threats over the telephones and later analyzing them.

While bomb threats are a matter requiring FBI investigation, any suspect would be charged with falsely reporting an incident under a state penal law, a class B misdemeanor punishable by up to three months imprisonment. An actual bombing is a federal offense; a threat could be, said Anderson.

It was a false alarm, as every threat has been since the beginning of the year.

Onco has been barred from campus by security and faces arrest for criminal trespass should he disobey the order. He is not a student at Buffalo State.