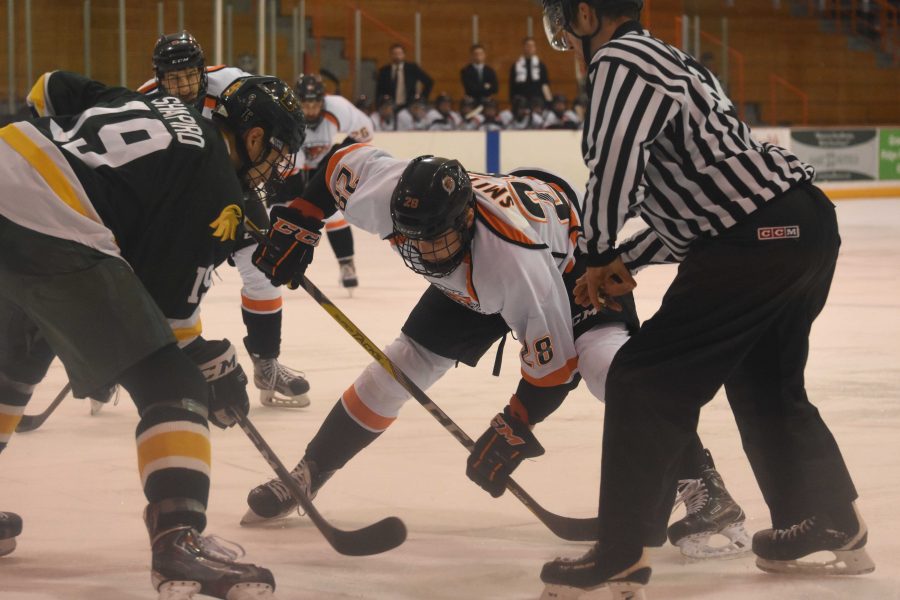 Buffalo State earned the No. 3 seed in the SUNYAC playoffs this week. It will host Fredonia, 4 seed, on Wednesday.

The Bengals came into Saturday night with a chance at a first round bye, but unfortunately for Buffalo State, it ran into red-hot Kenny Neil. Lead by Neil, Oswego downed the Bengals, 6-1.

The Lakers got on the board just 39 seconds into the game. Neil found Andrew Barton to give Oswego the 1-0 lead.

After the quick goal, Buffalo State goaltender Mike DeLaVergne stood on his head for the Bengals. Multiple times DeLaVergne made big breakaway stops to keep his team in the game. Unfortunately for DeLaVergne, his team wasn’t able to get anything going on the other end.

Oswego outshot the Bengals 15-8 in the first period.

In the second period, the Bengals finally cracked. The Lakers took advantage as Neil took the puck right off the faceoff and deked out DeLaVergne for the goal. Less than a minute later, the Lakers had a 5-on-3 rush that was too much for Buffalo State to handle. Chris Waterstreet took a shot from the left and Cameron Berry grabbed the rebound shot the puck five-hole to take the 3-0 lead.

Buffalo State finally got on the board as Jonathan Colley knocked home a rebound off a Michael Guerrera shot.

The Lakers scored on another power play as Neil got the puck on the inside edge of the faceoff circle and blasted it in short side to give the Lakers the 4-1 lead at the end of the second period.

DeLaVergne’s night was over after giving up five goals on 22 shots in a matter of 37 minutes on the ice.

Andrei Svistunov came in net for the Bengals and stopped six of eight shots on goal.

In the third, Neil’s big night continued scoring two more goals to put the game away.

Neil ended the game with four goals and one assist against the Bengals Saturday.

The power play woes continue for the Bengals as Buffalo State went 0-7 with the man-advantage in the loss.

In other SUNYAC action…

The Bengals got some help Saturday afternoon as Brockport put down Plattsburgh 8-4 to keep Buff State in the running for second, if the Bengals attained a win this game.

Geneseo blew out Potsdam 8-0 on Saturday night. A tie or a Knights loss was also needed to give keep the Bengals in the hunt a first round bye.

Cortland, Morrisville and Potsdam are out of the playoffs. The Bengals host Fredonia and Geneseo will host Brockport on Wednesday in the quarterfinals. Oswego and Plattsburgh earn first round byes.

The ‘Battle by the Lake’ rivalry is renewed with a little extra special meaning on Wednesday at the Buffalo State Ice Arena. Faceoff is at 7 p.m.