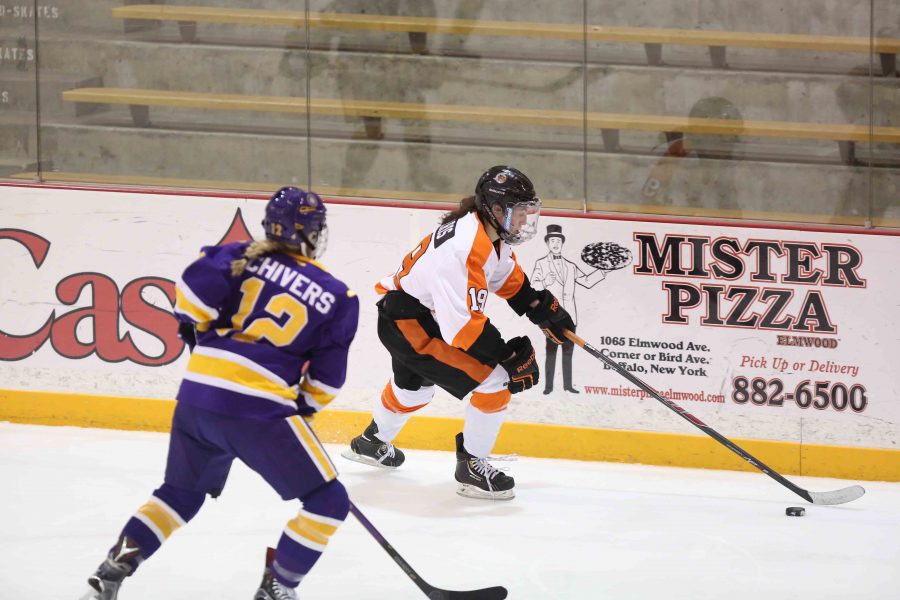 Buffalo State got its first points against Plattsburgh on Saturday in 33 meetings.

The Buffalo State Lady Bengals put on a valiant, however, unsuccessful effort against the No. 1 ranked Plattsburgh Cardinals (23-1 overall, 16-1 ECAC WEST) on Friday night at the Ice Arena. The Cardinals, who are three-time defending D-III National champs, got the win with a 3-0 victory.

The Bengals were strong in the first period. Both teams conceded no goals, despite the Cardinals’ 14-3 shot advantage through aggressive play. Several Cardinals’ opportunities were off Bengal turnovers in their own zone.

Things looked up for the Bengals in the beginning of the second period as Buffalo State got two power plays. However, the Bengals could not convert on either chance.

The scoring opened when the Cardinals’ Melissa Ames scored a deflection goal on a power play from a Madeline Kromer holding penalty, seven minutes into the second.

The deficit got even larger for the Bengals when Sheeran scored off an assist by Courtney Moriarty with almost four minutes to go in the second period.

Despite a holding penalty on team captain Viivi Vaattovaara less than a minute later, the Bengals were able to hold on to the third period and increased their shot total from three to 16.

The dagger of the night came on a unassisted goal by Moriarty just under seven minutes into the third period, when she scored from a scramble in front of the net.

With the win, Plattsburgh goalie Camille Leonard became the most winningest goalie in NCAA Division III history with 70 throughout her career. Her game included saving all 25 shots from the Bengals.

Justine Silva, the Bengals starting goalie also made 37 saves, as the Bengals were outshot 40-25.

The Bengals will get another chance to upend the No. 1 team in the nation Saturday at 2 p.m. at the Ice Arena. It will be their regular season finale before playoffs on Thursday, Feb. 23. Buffalo State is currently ranked third in the ECAC West.