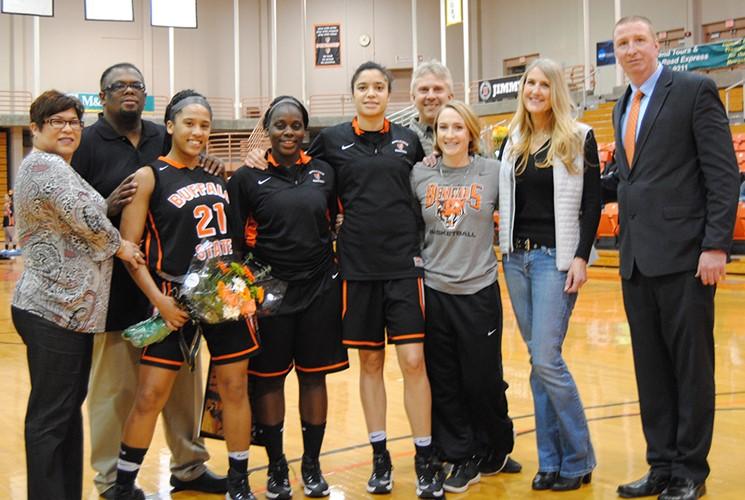 The Lady Bengals pose with their family and head coach Kevin Clifford after a win on Senior Night.

The Lady Bengals had their Senior Day Saturday, honoring senior guards Shyasha Spencer, Jasmine Shirley and the injured Taylor Graham. However, it was sophomore forward Princella McCullough who made the marquee as she hit the game-winning basket with 2.2 seconds left in the game.

The game was a high-scoring, back-and-forth battle late.

The first point of the game was scored by Lakers guard Heather Hebert at the line and the game was rolling. The largest lead of the opening quarter was five held by both teams. The Bengals led 11-6 early in the first, until the Lakers went on a 10-0 run over the last 5:23 to finish the quarter, 16-11.

Oswego held its own and led throughout the entire second quarter and the lead swelled up to 10 with 4:34 left in the half. The 10-point lead was the largest of the game for the Lakers. At the half, McCullough had 14 rebounds but the Lakers led by five, 28-23.

Slowly but surely, the Bengals crawled their way back in the third quarter. After being fouled and converting two free throws, freshman guard Kaelee Lynch gave the Bengals their first lead since the first quarter. Over the last three minutes in the third, the Bengals went on a 12-2 run. The Bengals outscored the Lakers 25-13.

“We won the third quarter. That’s where we have struggled all season long,” said Bengals’ head coach Kevin Clifford.

At the 8:22 mark, the Bengals held a 13-point lead, the largest of the game, but the Lakers did not throw in the towel.  With 1:39 left in regulation, Oswego forward Courtney Amelee made a free throw to cut the Lakers deficit to three point. After a few bad shot selections and turnovers for both teams, the Lakers had possession and called a timeout with 23 seconds left. Lakers’ head coach Tracy Bruno drew up a play that led to Amelee shooting a 3-pointer which was banked in.

With nine seconds, coach Clifford called a timeout and drew up a play. Sophomore guard Grace Licata inbounded to Spencer, who got it to junior guard Caleh McLean and she saw McCullough having an advantage in a mismatch.

After getting the pass, McCullough banked it in with her left hand, leaving 2.2 left on the clock. The Lakers had no timeouts left. The Lakers rolled the ball in, which was picked up by guard Mary Mazzella and her heave from beyond half court hit the backboard, the front rim and did not go in.

“I was saying to myself ‘please don’t go in,’” said Clifford.

Upon seeing the ball rim out, McCullough gave out a yell along with a fist pump. The losing streak finally came to an end.

“Our seniors stepped up and so did our bench players, Caleh McLean, Kaelee Lynch and Grace (Licata) were phenomenal,” said coach Clifford after the game.

McLean led all scorers with 26 points, going 11-for-16 from the field on Saturday. McCullough recorded her tenth double-double on Saturday. She had 11 points and 14 rebounds. Lynch had 14 points and Licata had nine points.

Amelee and Hebert led the Lakers in scoring with 17 and 15 points, respectively.

Buffalo State has been eliminated from playoff contention. Fredonia has clinched a berth in the playoffs.