In each of its three losses this season, Buffalo State men's hockey has responded with four-goal margin wins 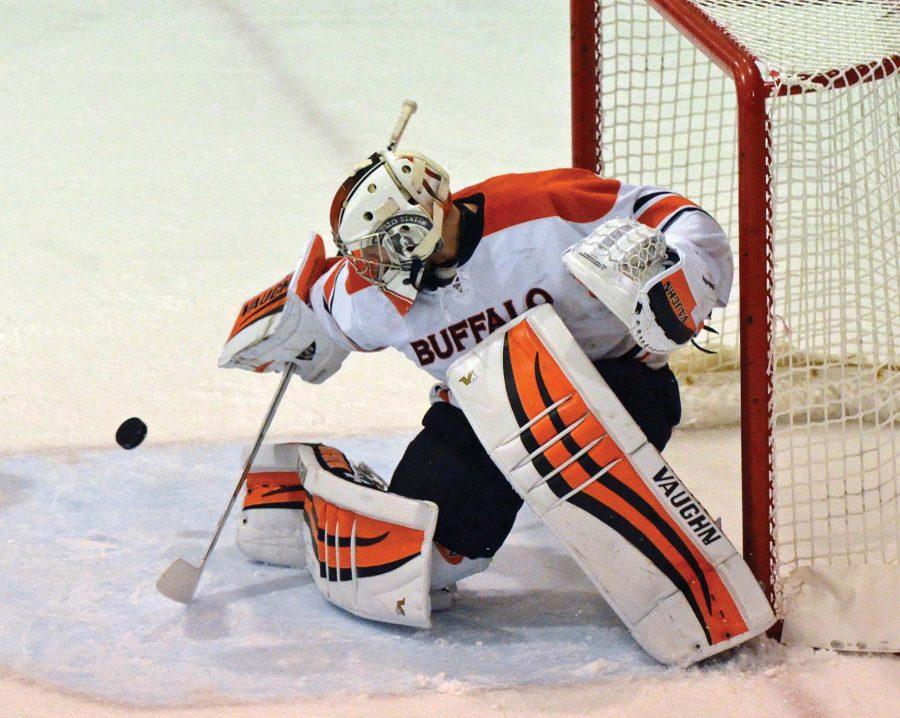 Last weekend was one to forget for the Buffalo State men’s hockey team. After beating Morrisville State Friday night, the Bengals gave up eight goals in an 8-2 loss to the Mustangs on home ice Saturday.

“We weren’t getting the bounces that we usually get,” freshman forward Anthony Passero said. “Morrisville wasn’t backing down Saturday.”

The most disturbing part of the weekend for the Bengals wasn’t the goals given up, but the penalties taken. Buffalo State took a total of 17 penalties in two games this weekend — a major spike as the Bengals had only 65 penalties through 19 games up to this point.

“Ultimately, the penalties are on us. We need to figure out how to not take penalties late in the game,” senior forward Taylor Pryce said.

“That’s been a huge issue for us, especially this past weekend,” head coach Steve Murphy admitted. “We need to stay disciplined, not getting drawn into stuff and keeping our feet moving.”

Late in the second period of Saturday’s game, it looked like Taylor Pryce had scored on a breakaway to tie the game, but the Mustang goaltender knocked the net off and no penalty was assessed. After the Bengals complained, they received an unsportsmanlike penalty. In the third, the Bengals gave up five unanswered goals.

“I think we just cracked,” Passero said. “We didn’t get a call we wanted and instead of bouncing back, we just put our heads down and it went downhill from there.”

The loss Saturday also dropped Buffalo State to fourth place in SUNYAC with 15 points — two behind Plattsburgh and Geneseo.

Since the beginning of the spring semester, the Bengals haven’t been moving the puck like they were earlier in the season. The Bengals have gone 2-2.

“It’s little distractions getting us off the game,” Pryce said. “We need to focus on ourselves and not on the refs or anyone else.”

Buffalo State must leave this past weekend in the rear-view mirror as they have a big weekend coming up. They play Brockport and No. 2 Geneseo in SUNYAC conference play.

“Last weekend is done and over, nothing we can do about it now,” Murphy said. “We’re concerned about Friday and Saturday.”

“We have to have a short memory, you can’t be dwelling on the past,” Pryce said. “We just have to get prepared for this weekend.”

After Buffalo State’s three previous losses, the Bengals came out to play the ensuing game and won by four-goal margins in each contest.

“Our ability to bounce back has been an important part of our success,” Murphy said.

Buffalo State looks to bounce back this weekend as there are only four games left in the regular season, so every game may decide a playoff seed.

On Friday night, the Bengals will host Brockport. Buffalo State defeated the Golden Eagles 4-1 on Dec. 2 at Brockport. Brockport is currently the sixth seed in the SUNYAC conference with 10 points, but have won three of their last four games.

Saturday night, Buffalo State will travel to Geneseo to take on the Knights. The Bengals beat Geneseo in Buffalo on Dec. 3 by a score of 4-1. Since then the Knights have won seven of their last 11 games, now with 17 points tied with Plattsburgh at No. 2.

Leading the Bengals into this weekend will be Pryce, a captain for the team.

“I have to lead by example,” Pryce said. “Whether that’s keeping my cool or getting a big goal late in the game, everything I have to do to show these guys the way is what I have to do.”

“He needs to lead by example,” Murphy said. “When he’s moving his feet he’s a tough guy to stop. That is what gets his game going.”

An unexpected bright spot for the Bengals has been the contribution from the freshmen, especially Passero and Roberts Smits. Passero leads the team in scoring with 26 points and Smits has four goals and 10 assists this season. They will certainly be counted on this weekend.

“This is the first time we’ve really struggled this season,” Murphy said “We came out of the gate hot and they haven’t gone through adversity, but we have a good core group of older guys that will show them the way.”

Buffalo State hosts Brockport tonight at 7 p.m. at the Buffalo State Ice Arena. The Bengals have a 7 p.m. faceoff Saturday with the Knights in Geneseo.