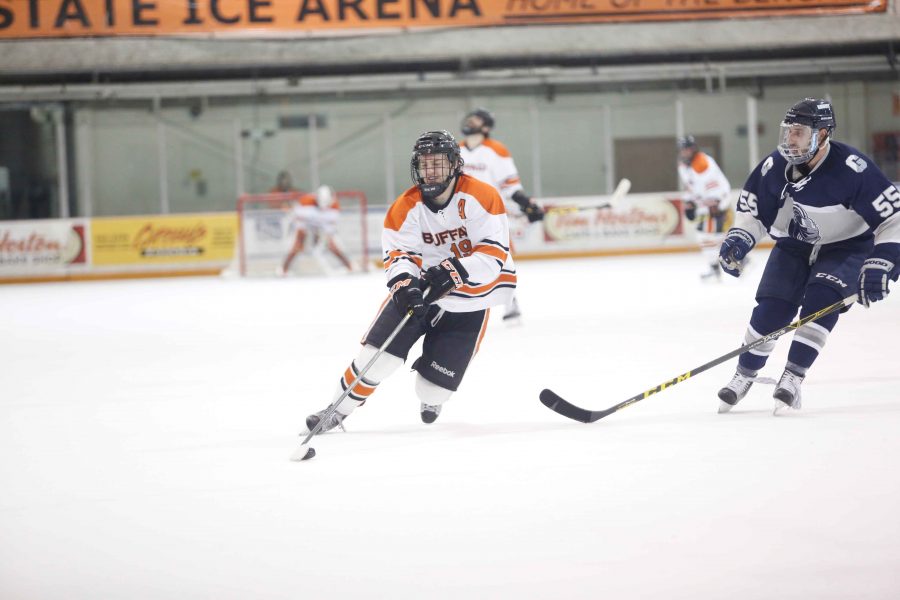 One of the hardest things to do in sports is to beat the same opponent twice.

The Bengals got off to a good start keeping pressure on Morrisville State. Roberts Smits took advantage of a loose puck in the Mustangs’ zone and found captain Taylor Pryce who decked out the goalie and scored backhanded.

Halfway through the second period, Santino took advantage of another power play opportunity and got the Mustangs the lead.

Late in the second period, the Bengals looked like they had tied the game back up. Zach Stein sent a pass from his own goal line all the way to Pryce just before he hit the Morrisville blue line. Pryce took the pass in stride and had a breakaway. It looked like the puck was going in until the Mustangs goalie moved his right skate in an attempt to make the save and dislodged the net.

The referees said the goal had to be disallowed since the net was dislodged and gave no delay of game penalty to Morrisville State. The Buffalo State coaching staff argued and was swiftly given an unsportsmanlike penalty.

“It was a big momentum swing,” Buffalo State assistant coach Nick Therrien admitted. “Ultimately, we haven’t shown the fire to pull the games in third period when we’re losing.”

In the third, the Bengals couldn’t seem to shake off the incident and gave up five unanswered goals.

Penalties were clearly a problem for the Bengals. Buffalo State took nine penalties Saturday. The Bengals mostly stayed out of the box this season taking only 62 penalties in 19 games heading into the home-and-home against Morrisville State. This weekend the Bengals took a total of 17 penalties.

“Throughout this season, we’ve been one of the most disciplined teams in the country but these last two nights we took too many penalties,” Therrien said.

The men’s hockey team has important weekend coming up that will have a big effect on SUNYAC playoff seeding. The Bengals will host Brockport Friday, Feb. 10 at 7 p.m. Buffalo State will travel to No. 2 Geneseo on Saturday for a 7 p.m. face off.