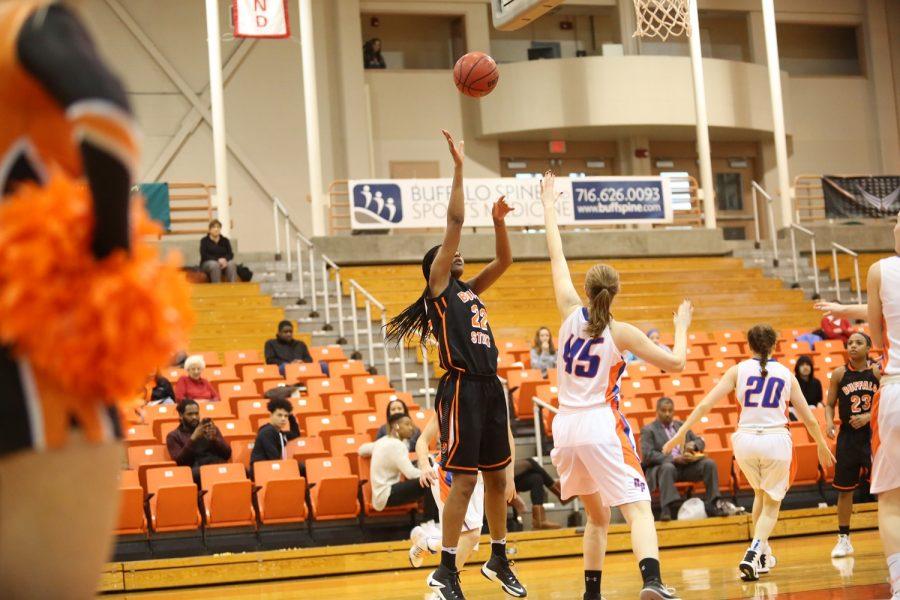 With the loss on Friday, Buffalo State becomes mathematically eliminated from playoff contention.

The Lady basketball Bengals (6-14 overall, 3-10 SUNYAC) headed to Fredonia for their first Battle by the Lake this season Saturday night. The Bengals shot 40 percent from beyond the arc to the Blue Devils’ 38, however, Fredonia led in nearly every other statistical category and emerged victorious, 81-60.

Early on, it seemed like more of the same for the Bengals as they trailed 9-2 in the first, but the Bengals went on a quick run and cut the deficit down to one halfway into the first quarter. After the first ten minutes, Fredonia led 21-17.

In the second quarter, the Blue Devils missed 12 free throws but the Bengals could not capitalize as they were outscored in the latter quarter of the first half, 18-11. Going into the locker room, Fredonia led 39-28.

The Bengals showed some tenacity as they tried to comeback starting the second half. Despite cutting the lead down to eight, the Blue Devils shifted into the next gear and pulled away. The Blue Devils led by as much as 25 at one point in the fourth.

The next time the Buffalo State Bengals take the hardwood floor will be in the month of February. They will travel to Oneonta on Friday, Feb. 3 to take on the Red Dragons (12-7, 9-3). Earlier this season, Oneonta defeated the Bengals, 69-57, in Buffalo.