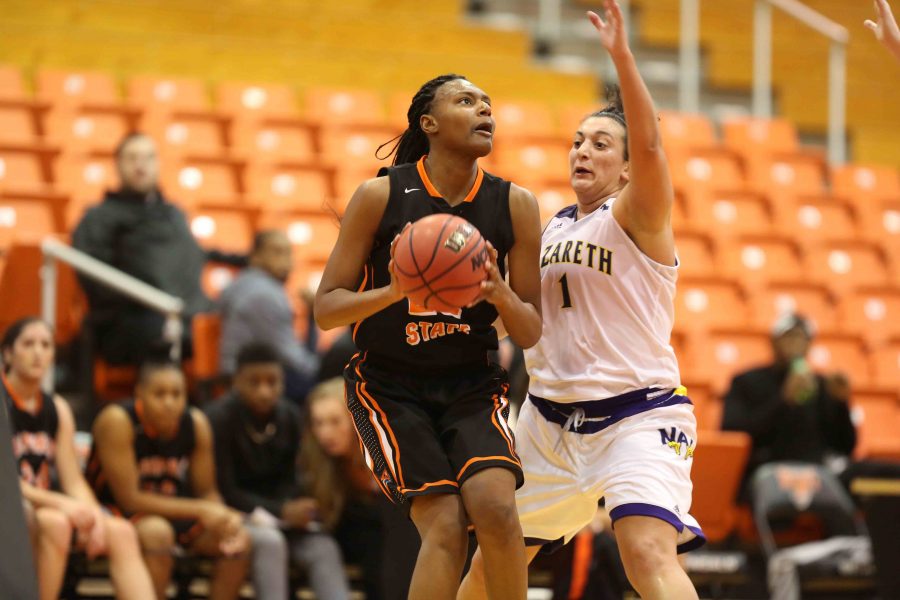 McCullough taking a shot up against a Nazareth defender.

Last Tuesday, the Buffalo State Bengals had their lone contest of the week against the Houghton Pioneers. The long, close battle ended with a Buffalo State victory, 64-59, in an untraditional way.

The game was a defensive battle throughout. The largest lead for the Bengals was six, which came early in the fourth quarter. The Highlanders led by eight at one point early in the first quarter. The Bengals shot a decent 37 percent from the field compared to Pioneers’ 33.

The Pioneers were able to check double-double machine Princella McCullough as they held the sophomore forward to four points on 2 for 8 shooting in 26 minutes of action. The low number of minutes she played is reflected in the foul troubles she had throughout the game. However, McCullough was still able to snatch 12 rebounds.

The leading scorers for the Bengals were sophomore guard Aaliyah Graham and junior guard Caleh McLean. They each registered 19 points. Graham went 7 for 11, 3 for 5 from behind the arc. Graham also grabbed five rebounds and had 3 steals. McLean went 6 for 16, 6 for 8 from the free throw line and added 3 steals as well.

“Aaliyah’s been great. She probably should’ve played more the last game, but she’s been great since,” Buffalo State head coach Kevin Clifford said. “The last two, three weeks, she’s been coming to practice, actually shooting with the coaching staff and she was out here at 3 o’clock today shooting shots.”

The team has depth, and many different players have stood up lately.

“Caleh’s been great, too,” Clifford said. “Caleh was a walk-on her freshman year. Last year, she averaged 7 points. We’re trying to get her to be confident and be aggressive. She’s a great skill player. Sometimes she doesn’t show it as much as she should.”

The Bengals were in foul trouble for the better part of the night, which is the reason 11 different Bengals saw playing time. They were effective, too, as the Bengals bench outscored the Highlanders bench, 26-16.

With as little as 4:34 left in the game, the Highlanders were able to tie the score at 57. After that, momentum swung in the Bengals’ favor. Buffalo State went on a 7-2 run to end the game, highlighted by good defensive possessions that forced the Highlanders to take bad shots.

The Buffalo State Bengals (3-1) have a plethora of games over the next week. They will host the Alfred State Pioneers (2-2) on Tue. Nov, 29 before opening up SUNYAC conference play against the Plattsburgh Cardinals (2-1) on Fri. Dec. 2 and taking on the Potsdam Bears (1-1) on Sat., Dec. 3.