A survivor puts a face on sexual assault crisis 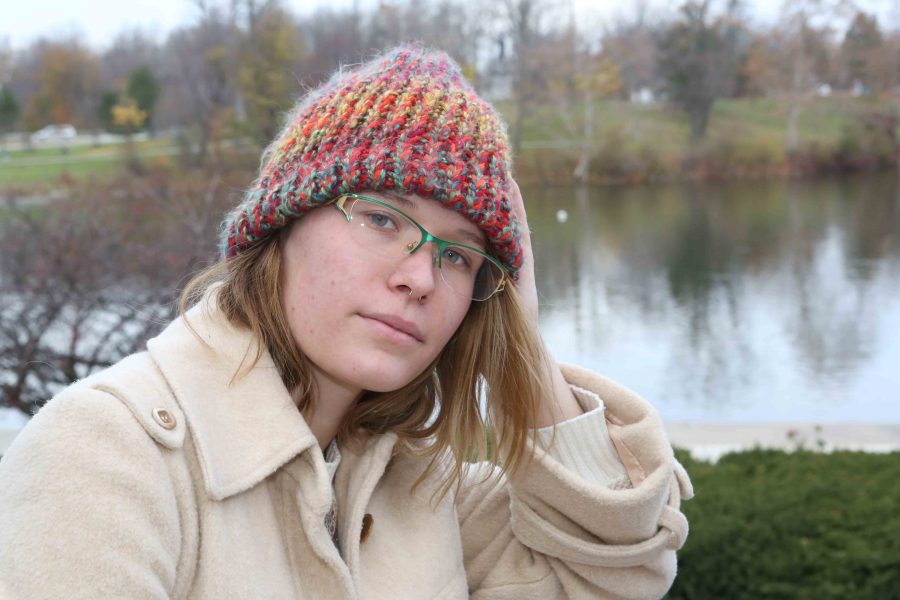 24-year-old senior urban planning major Samantha Gardner was allegedly sexually assaulted on campus. Unlike the 63 percent of cases that go unreported, she wants to tell her story.

Samantha Gardner isn’t “Jackie” – the print name Rolling Stone gave the young woman featured in a retracted article to protect her identity who was allegedly raped as a freshman at University of Virginia in 2012.

Gardner fully understands and respects sexual assault victims who – in most cases are already fighting personal battles – choose to keep their identities and stories private. She is aware that the public reaction to victims of sexual assault is often far from empathetic or favorable. She has already seen unfavorable rulings in both the original and appeal hearings decide her attacker is not guilty.

Samantha Gardner is a 24-year-old petite, impassioned young woman who feels she has suffered injustices on several accounts. Above all, she just wants her voice to be heard.

Standing beneath the willows and oaks of Hoyt Lake that provide a peaceful oasis to escape to from the nearby SUNY Buffalo State campus where she counts each resented day leading to her graduation next spring, she’s ready to turn a new leaf, but not ready to give up a battle that has just begun.

Gardner clenches her fist and provides a fiery explanation as to why she won’t give up, even in the wake of losing two draining, drawn out court hearings ending in the favor of her legally innocent attacker.

“Because that’s what everyone else has done. I don’t like that,” she said. “I see the image of a sexual assault survivor – what I’ve seen and what I feel like the media has portrayed – is someone who just sits in the corner and doesn’t say anything. No, I want sexual assault survivors to be strong women who are not going to back down until something happens, until the gates flood open.”

She turned and gazed at the softly churning waters of Hoyt Lake. Her grip loosened, her scowl faded a bit.

“There is a lot of awareness about sexual assault survivors on college campuses, and I’m just trying to add another ripple to the water to create a tsunami. I just want to push the edge,” Gardner says.

Gardner grew up in Ripley, NY, a small town a short drive from the Pennsylvania border on Lake Erie. She graduated high school as the salutatorian of a class of just 29. Living in a rural setting with few other kids to play with nearby, Gardner spent much of her youth exploring outside alone, preferably barefoot, gaining a profound appreciation for nature.

She spent her first two years out of high school at Jamestown Community College, went to SUNY Fredonia for a short while, then made the decision to head north up the shore of Lake Erie to Buffalo State for the Fall 2015 semester. She majors in urban planning and wants to be an urban agriculturist – someone who works to create sustainable methods of growing whole foods in urban settings.

“This world needs to be sustainable, and it’s not going to be the way we’re using resources,” she explained.

The storyline is familiar: friends go out for a few drinks, a few drinks become a few too many, awful decisions are made and it all comes to a head the miserable morning after when bits of blurry memories of an awry night are pieced together and someone realizes they – for the rest of their life – will be a sexual assault victim.

Post-incident, Gardner refers to her attacker – we’ll call him John – as someone who was a “good colleague,” who she didn’t foresee being friends with post-graduation. Gardner and John had gotten to know each other through classes together and had gone out for drinks on a few other occasions. They planned to meet each other out again over spring break.

On a late March evening in 2016, they met each other out at Cole’s, a bar just a few blocks down from Buffalo State on Elmwood Avenue. After a few drinks, they left Cole’s and walked to nearby McGarret’s, where Gardner says her memory started to become “fuzzy.”

At the end of the night, Gardner drove John to his car parked in the lot behind the E.H. Butler Library at Buffalo State. This is where Gardner claims John sexually assaulted her.

John texted her that night – “What’s your deal? I hope you got home okay.” The next morning, he wouldn’t stop calling and texting her, even after she asked him to leave her alone.

Gardner showered first thing in the morning because his scent was “unbearable.” She wishes she hadn’t. She believes it’s the reason why the rape kit came back negative.

Gardner felt a bit out of place as a small-town girl living in the city for the first time, and was just starting to get comfortable at Buffalo State when it happened, and made being on campus a living nightmare.

“When this first happened, I could not stand being on campus alone,” Gardner said. “I always had someone with me – a classmate, just someone in general, because everywhere I’d go, since it’s kind of a small campus, I’d see him all the time, even when we didn’t have class together. Every time I’d see his body frame or someone with the same hat on as him, I got really uneasy and anxious.”

After John was found not guilty in both hearings, he was allowed to return from an extended excused absence to the class he shares with Gardner.

Gardner is frustrated. She feels let down by the school’s judicial system that she feels conducted hearings “biased” in John’s favor and gave her “lip service.”

“It just seemed like they were trying to get it over with,” Gardner said, “(and) get all the questions out that they needed to ask.”

She says John was found not guilty because her story was inconsistent. She cites the trauma she experienced, her intoxication and the time that spanned the incidents and both hearings as causes for her inconsistencies.

“Incidents like this cause PTSD [post-traumatic stress disorder] and trauma,” Gardner says. “And what trauma does is it messes with your memory; of course my memories are going to be a little bit different.”

Gardner will be the first to admit that she drank too much and didn’t belong behind the wheel. She doesn’t remember the car ride home and used an online blood-alcohol content calculator to determine that her BAC was .18 – over two times the legal limit.

She figured that because someone who is intoxicated cannot provide consent, her knowledge of her BAC would help her case. In retrospect, “… obviously it didn’t,” she said. John claimed he was not under the influence of alcohol.

“There are studies that have been done that say there’s a high preponderance of cases where alcohol is involved in sexual violence,” said University Police Department Chief of Police Peter Carey.  “It’s not a negative impairment to either the accused or the defendant; you just have to see how it impairs their ability to recount what took place.

“The fact that someone is intoxicated as a victim does not have any negative impact at all – it can have an effect criminally if it’s to the point where the person is incapable of giving consent. If the victim was drunk and passed out, the intoxication there plays into their ability to give consent; you can’t give consent if you’re passed out. The fact that they’ve consumed drugs or alcohol doesn’t make what they’re saying any less for either party.”

Gardner filed a judicial complaint with Buffalo State four days after the incident. The first hearing was about a month and a half later on May 12. It was held over two separate sessions about two weeks apart because a member of the board – a professor – had to conduct a final. Gardner took exception to this. Chief Diversity Officer and Title IX Coordinator at Buffalo State, Karen Clinton Jones, confirmed that this situation would warrant a second hearing as all board members must be present.

About two weeks after the initial hearing, Gardner was notified that John was found not guilty. She submitted an appeal at the beginning of June, but did not hear back until she received an email on Aug. 25 – the Thursday before the fall semester began. She was not allowed to attend the appeal hearing and was notified shortly after it took place via email that John was, once again, found not guilty.

William Sabio was brought on as a member of Buffalo State’s Dean of Students office in August. Clinton Jones says the Title IX Investigator and Prevention Specialist’s hiring was not in response to any specific case or incident.

“There’s a lot of education and outreach expected in that position,” said Dean of Students Charles Kenyon of Sabio’s role, “so the students are informed about their rights and how to avoid being in a predicament where they’re sexually assaulted.”

“If he was there from day one, things would have been different – even if outcomes came out the same,” she said. The outcome of the case is what it is at this point.

Gardner is motivated to make a difference in the lives of other sexual assault victims while moving forward with her own. She has plans to volunteer for the local chapter of Walk a Mile in Her Shoes organized by Erie County Crisis Services in April – she calls it “the race where the guys wear the heels” – and looks forward to sharing her poetry at a local open mic night.

Hoyt Lake – a lush, serene setting hidden away in the corner of a bustling Buffalo thoroughfare – is just a five-minute bike ride from Gardner’s Elmwood Village apartment. Here, she “mends” herself through poetry. It’s helped her a lot, and she hopes to encourage other sexual assault victims to do the same.

“My favorite spot to sit is on the bridge watching the sunrises and sunsets here – it’s so intimate for me,” Gardner said. “I haven’t been intimate with anyone the way I’ve wanted to be in years because I’ve been in other sexual assault incidents and abusive relationships. The love I have for nature is something I never want to lose.”

She considered telling her story in a cozy, quiet coffee shop, but even on a brisk, gusty day, she decided that – like in her poetry – the right words could only be expressed here. She calls it her “safe place.”

“Lately in my poetry, I’ve been talking about the seasons changing and my love for Hoyt Lake,” Gardner said. “This place is always changing, and so are we. This place has made me feel beautiful.”