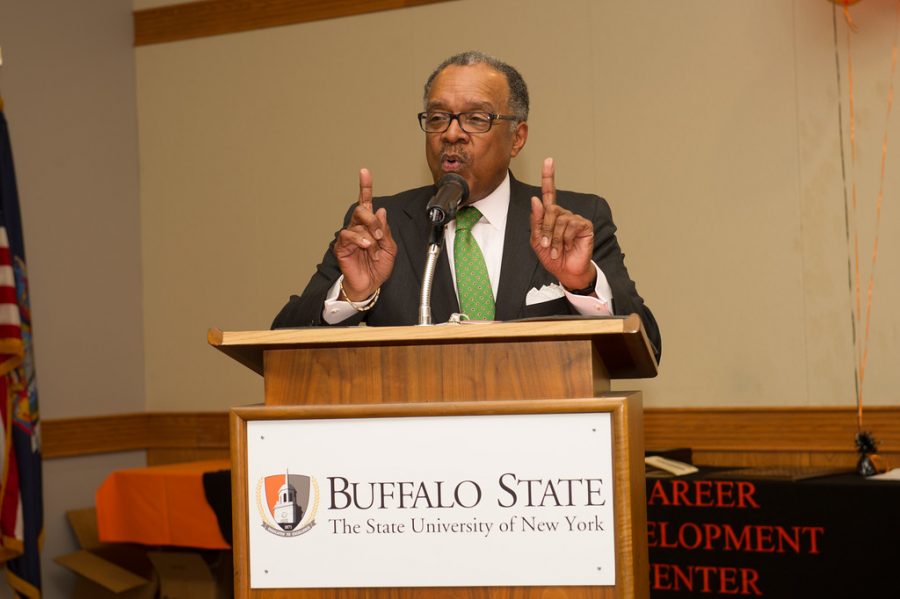 Hal Payne has contributed to significant development and service on and off campus.

Anybody who believes themselves to be a life-long hard worker knows that retiring will be a bittersweet pill to swallow.  On Nov. 10, 2016, SUNY Buffalo State announced the upcoming retirement of a man who holds 27 years of dedicated service to this school: Vice President of Student Affairs Hal D. Payne.

Payne first arrived at Buffalo State in February 1990 as the acting-Vice President of Student Affairs. More than one year later in May of 1991, he became full-time VP of student affairs.  However, his beginnings and his accomplishments extend way beyond the confines of Buffalo State’s walls.

To look at Payne’s resume is to be wowed by a man who seems to become involved in every and any cause he feels passionately about.

Payne received his law degree from Case Western Reserve University, and was influenced by a member of that school’s education department to pursue a track toward the reform and promotion of higher education. When Congressman Louis Stokes of Cleveland, OH invited Payne to be his chief of staff in Washington, D.C., this became Payne’s main focus.

His success in the promotion of the TRiO programs (Upward Bound, Talent Search, Student Support Services, among others) and aid in the educational development of disadvantaged youth, are some things Payne feels may be his greatest accomplishments.

Because of this background, Payne felt he was the perfect  match for the job at Buffalo State.

“Buffalo State is a transformative university, one where the philosophy is that students with potential can succeed at a higher level,” Payne said, “so this school and the job matched well with my experience promoting TRiO.”

In his 27 years at Buffalo State, Payne’s accomplishments include spear-heading renovations to many of the school’s buildings. These include renovations done to the Moore Complex, Campbell Student Union, the press box at Coyer Field, and turning the Houston Gymnasium into a modern fitness center.

“When I got here, there was no emphasis on community aide,” Payne said. “We concluded that what would make Buffalo State unique is that students should be remembered for their service to this committee.”

This has been the torch carried by Buffalo State up to this day, most recently being awarded the 2016 Higher Education Civic Engagement Award by the Washington Center.

Payne’s own community service can be seen around various learning institutes in Buffalo, including the Read to Succeed program, Just Buffalo Literary Center, the Hillside Family Foundation sponsored by Wegman’s, and the commissioner for the Buffalo Municipal Housing Authority, which assists residents of Buffalo in maintaining a higher quality of life.  Payne also serves as a member of the Buffalo Zoological Association, a member of the New York Council on the Arts.

Payne has focused his entire life on helping others, so he and his family decided it was time for him to shift most of his attention toward his family.

“My daughter just accepted a position with Goldman Sachs in New York City and what needs to be done involves all of our family pitching in,” Payne said. “So my family suggested this to be the optimal time to devote more of my time to the family than my profession.”

Payne does not concern himself with legacy, hoping that his greatest accomplishment will be the influence he has had on his students over the years.

“If I drove away from Buffalo State and everybody forgot about Hal D. Payne, I’d be comfortable with that,” Payne said. “I’m more proud of when my students come back to me and tell me the impact I had on their lives.”

The legacy Payne will leave behind will not only be in name, but also in spirit. On Feb. 26, 2014, Mayor Byron Brown commissioned that date to be “Hal Payne Day,” and Payne considers his proudest moment of all when Upward Bound designated a scholarship in his name.

Although President Katherine Conway-Turner has worked with Payne at Buffalo State for only two years, she considers his accomplishments to Buffalo State, the city of Buffalo, as well as to the State of New York, to be second to none.

“Vice President Payne has lead Student Affairs with commitment, dedication, and enthusiasm and has been a guiding force in the development of a contemporary student affairs division,” Conway-Turner said. “As the senior member of my presidential cabinet, Vice President Payne has provided a historical and sound voice on many decisions.”

Many students at Buffalo State may not be familiar with the name of Hal D. Payne and may remain unaware of those who do dedicate their lives to the improvement of their school, as well as the development of them as students.

For the students here who live in the Moore Complex, use the fitness center in Houston, and try to immerse themselves in the Buffalo State culture of community service, in more ways than one, they are all indebted to Hal Payne’s efforts.