Football closes out campaign at .500 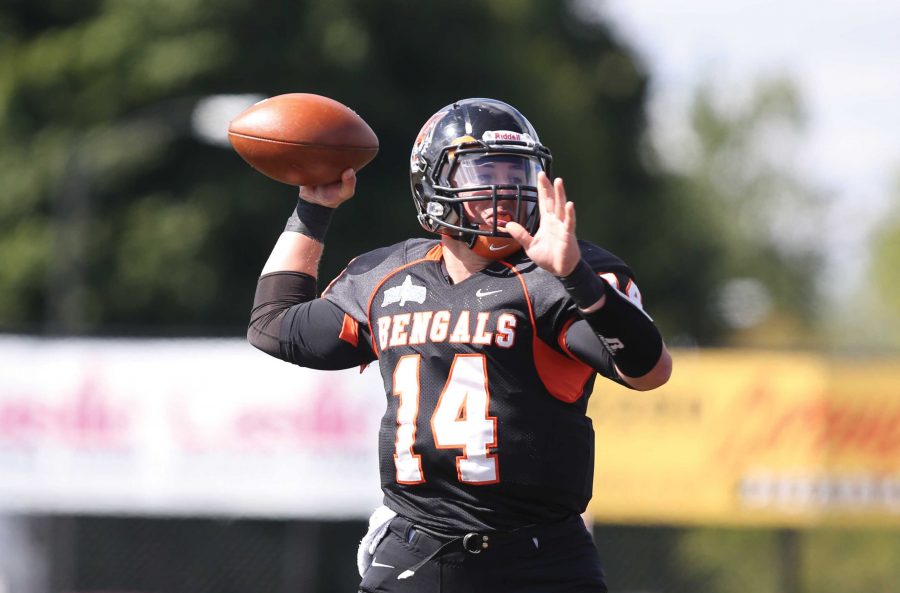 The inconsistency has been consistent. From week 1 to 2, then 3, the Buffalo State Football Bengals have been hit or miss football team. Some Saturdays, the offense is hot, the next it’s the defense.

“We’re trying to spend the next few days examining why we felt that was,” Buffalo State head coach Jerry Boyes said of the inconsistency this season. “Either getting input from the players — why they feel we had this bit of a yo-yo season. We played very well, then played not so well.

“It was necessarily up-and-down during the game, but we played up very, very well in one game and not so well the next game. That was probably the thing that disturbs me the most about this season, the inconsistency of play.”

The offense this week was led by the passing attack. Junior Kyle Hoppy was 12 of 27 for 211 yards, three touchdowns and two picks. Senior Aaron Ertel added to the attack by completing 12 for 19 for 111 yards.

Hoppy began the scoring, completing a 64-yard catch-and-run to Stephen Johnson just 2:06 into the game. The Bengals were off to a good start until Hoppy got taken out, seemingly due to injury, after a third-down sack on the team’s third possession. The change in quarterback swung momentum in Brockport’s favor.

Brockport scored three consecutive touchdowns to put a sizeable lead over the Bengals, 21-7. The Bengals pushed back and went into the half down 28-18.

However, that gap was the closest it would be for the rest of the game. Brockport came away with the win and the I-90 Bowl title.

The loss marks the final game of the season and the final minutes for the seniors’ collegiate playing days. The team had seniors in pivotal roles like senior Ish Height who ended his campaign with a team-high four interceptions, one forced fumble and 31 total tackles.

“I guess the biggest thing that I think our senior leadership brought was a very good group of men who lead by example,” Boyes added. “Their character, their work ethic, off the field, in the weight room, in the classroom, they provided that great example leadership. They’re a class that had very good success.

“As a class, they’re probably, as I am, disappointed in the outcome of this past season. But you have to have a lot to be able to brag about. I think their legacy is how they lead by example.”