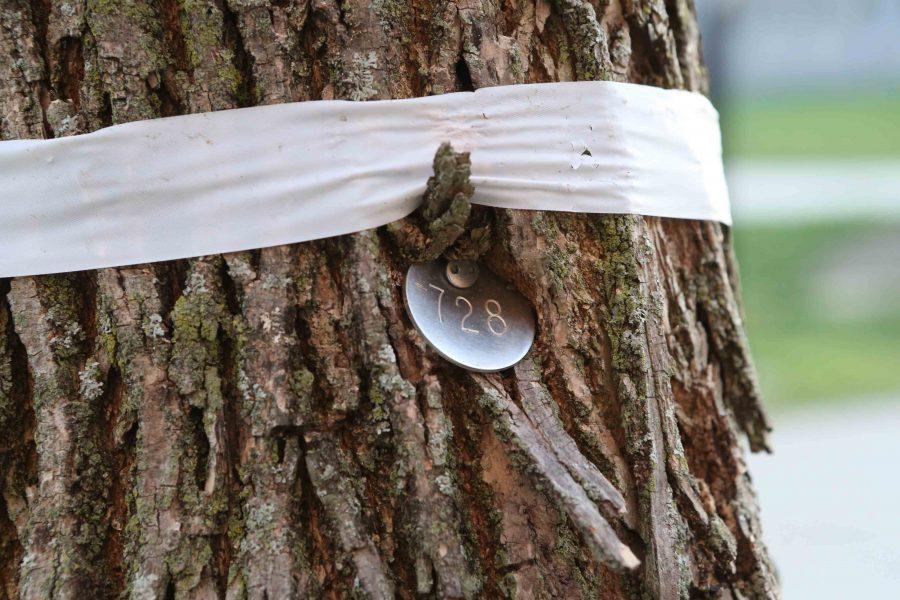 Ash trees near the Grant Street entrance of campus have been susceptible to invasive emerald ash borers.

Sometimes, it’s the little things that matter the most.

That seems to be the case for many ash trees on campus at SUNY Buffalo State.

Ash trees continue to be held to an unmerciful fate. They are constantly being tested by a formidable, unforgiving army that kills even the strongest of trees. However, this army has only recruited troops less than 13 millimeters long with torpedo-shaped, metallic green or copper uniforms, two antennas, eyes and a mouth.

The emerald ash borer is an invasive species of beetle that has flanked the west end of campus relentlessly – and this tactic it seems to have proven effective. Emerald ash borers are “the most destructive forest pest in North America,” according to emeraldashborer.info. They’ve created so much of a problem that state and federal agencies have made them a top priority.

Campus arborist Steve Sypniewski said there were 233 ash trees in Spring 2014. Now there are about 100 left.

“If I can save five or six of these, I’ll be happy. I don’t know if I’ll even be able to do that,” Sypniewski said. “Unfortunately, these ash trees are concentrated in one area of the campus right by Sports Arena. If you notice, there’s no more trees by Sports Arena. If you were here two years ago, you would have noticed that there were a lot more trees over there, but we lost a lot of them.”

They dig holes into ash trees, feeding off the tissues beneath the bark. Sypniewski said larvae live in the cambium layer of the ash tree, girdling or stripping the tree trunk, which ultimately kills the tree. Adult emerald ash borers emerge in May and June, and the cycle starts again.

“There are also ash trees on both sides of Grant Street between Rockwell Road and Iroquois Drive, and in the grass islands in the parking lot at 750 Grant St.”

While the future looks grim, there is still some hope.

Buffalo State has been directly injecting chemicals into the bark of ash trees to try to control the insect since 2011.

“So far, the injections are not as successful as we would hope,” Sypniewski said. “We have managed to save some trees.  We are hoping that these injections will ‘buy us time’ before the trees need to be replaced. Our hope is to save a few specimens for the college arboretum.”

Sypniewski is currently working with the campus horticulturalist to create a comprehensive plan to replant ash trees.

“We are planning a strategy that will implement planting many different species of trees so if a species specific insect or disease comes in the future, it won’t kill all the trees in an area.” Sypniewski said.

While the budget for this plan hasn’t been determined yet, a new committee formed on campus. The Friends of Maud Gordon Holmes Arboretum is raising funds to help offset the cost of new trees on campus.

For more information, go to arboretum.buffalostate.edu.