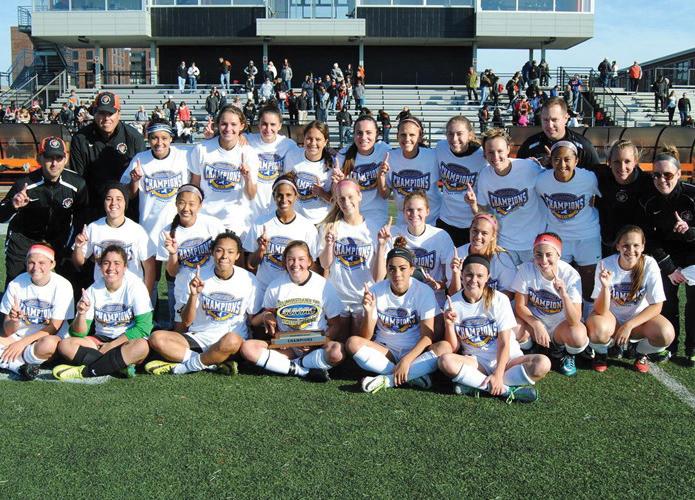 It has been an unforgettable season for the Buffalo State women’s soccer team. Their current No. 18 national D-III ranking is a program best. The team is on a 15-game unbeaten streak and 14-game win streak. Freshman goaltender Taylor Carillo put her name in the record books for longest shutout streak.

And to top it off, the Bengals won the SUNYAC title for the first time in program history.

They will host the first two games of the NCAA playoffs, barring a first-round loss.

Buffalo State hosted the Geneseo Knights in the SUNYAC Championship game this past Saturday, coming out on top 1-0.

The top seeded Bengals came in hoping to avenge last season’s disappointing loss to Oneonta in the conference title game.

The Bengals, led by head coach Nick DeMarsh, kept up with their high-pressure defense and high-tempo offense, which has been essential all season long.

In the 32nd minute after a scramble for the ball at the top of the 18, freshman midfielder Jada Sargeant was able to control it with her chest, then flicked it with her right foot to the net. Senior forward Melissa Smith, like many times this season, was able to re-route it. The ball hit the post and went past goalkeeper Emily Janiszewski to give the Bengals the 1-0 lead. It was Smith’s 15th goal of the season.

A few minutes after Smith’s goal, the Knights had a scoring chance, but the ball sailed to the left of freshman goalkeeper Taylor Carillo’s net, missing the post by a few inches.

The best chance for the Knights came in the 64th minute. A free kick was taken by Geneseo which the Bengals defended well. The ball was left of the box and Laurie Knapp was forced to pass to the trailing Taylor Clar, who ripped one from about 35 yards out.

Carillo blocked the shot, but the rebound left her vulnerable. However, Geneseo’s shot missed wide right.

The scoreless bout would stay that way. When the final whistle blew, Smith fell to her knees and the Bengals dogpiled around their senior captain. The Bengals claimed their first SUNYAC title in program history.

Smith was at a loss for words.

“Honestly no, it hasn’t sunk in yet,” Smith said after an excited yell. “I woke up this morning thinking ‘wow, we won,’ but I don’t know. It doesn’t feel like it actually happened.”

Smith climbed into fifth place in Buffalo State women’s soccer history for most career points after playing only two years. She began her collegiate career at the University of Pittsburgh-Bradford.

“I honestly had no clue what would happen when I transferred, but I couldn’t have wished for anything better,” Smith said. “I’ve been extremely blessed to have accomplished that in two years. I had no idea. You’re the first to tell me this. It wasn’t even something I thought of all.”

The championship guaranteed a bid to the NCAA tournament.

“I’m just so happy for my team and for all those players that put in the work,” DeMarsh said. “They really deserve it. It’s a player’s game. It’s not about the coach. My hat is off to this group of girls. They just work so hard. And my staff who work tirelessly in what they do. Everybody is working extra hours and trying to put in the extra effort to make sure we get it right, and this year, we got it right,”

“What a huge honor, right? We got the upper hand. We practice on Coyer everyday so we have a good chance,” Smith said.

The Messiah Falcons and the Staten Island Dolphins will play at 11 a.m. that same Saturday. Winner of Buffalo State-Montclair State will play the winner of Messiah-Staten Island on Sunday, Nov. 13 in the Round of 32.

Tickets will be sold each day at the Coyer Field ticket booth beginning one hour prior to the first game of the day. Admission for each day is $6 general admission, $3 for seniors and students, and $2 for children ages 3-12.