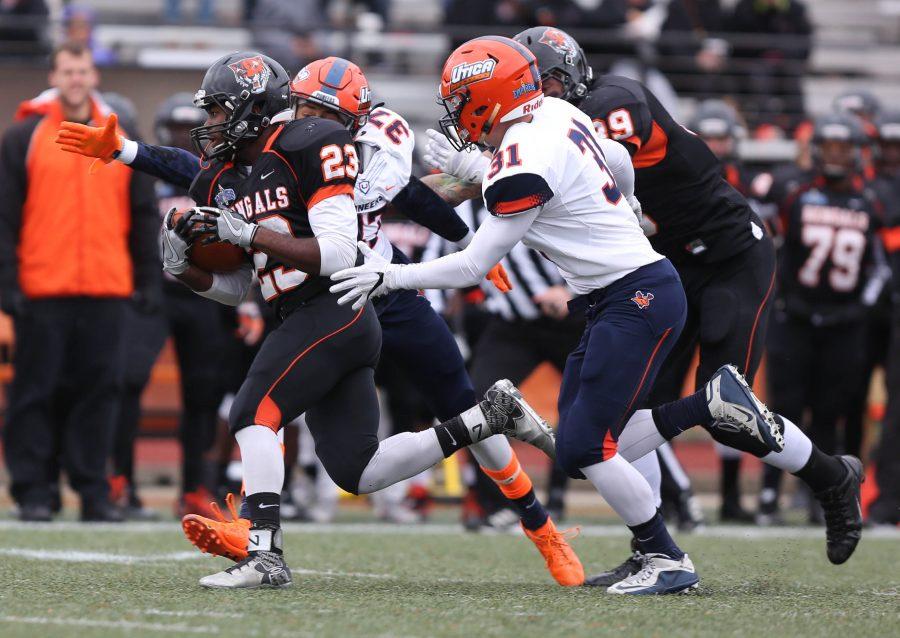 “We just didn’t finsh some of those promising drives that we had,” said head coach Jerry Boyes. “The last two weeks, we’ve finished drives pretty well, but today, I was just very disappointed with our play.”

Senior running back Tre Jones was effective with 147 yards on 17 carries. Kyle Hoppy had to scramble around all day. He ran for 41 yards, but only threw for 58 yards, one touchdown and two interceptions while going 5 for 22 through the air against Utica’s top ranked passing defense. Hoppy was only able to complete one pass in the second half. The Utica defense sacked Hoppy three times on the day. The Pioneers forced Buffalo State to punt on six drives.

Bengals get things going with a two-minute drill

Buffalo State put together a 10-play, 77-yard drive at the end of the first half. Senior running back Tre Jones took an option 17 yards. Senior receiver Madison Wesolowski then caught a pass and dragged defenders for a gain of 21 yards. The drive was capped off by a four-yard Nick Jones touchdown catch to tie the game at 13 going into the half.

Senior quarterback Teddy VanGalen connected with senior wide receiver Jerred Beniquez on a 63-yard streak to get the scoring going for the Pioneers. VanGalen passed to junior receiver Josh Connor for a gain of 30 yards to set up a score. Freshman running back Lindell Reed scored from a yard out for his ninth of the season in the first quarter. VanGalen completed 15 of 22 passes for 200 yards, two touchdowns and one interception on the day. Beniquez scored twice and recorded three catches for 74 yards. Senior running back Ryan Burnett sealed the game with a 39-yard run in the fourth quarter. Burnett had 32 carries for 153 yards and the score.

The Bengals appeared to have a first-and-goal on the Utica four-yard line, but the down was replayed because of matching penalties. The drive ended with a missed field goal that was not converted because the hold was muffed. That was the Bengals’ final scoring chance. Hoppy was intercepted on fourth down with 50 seconds to go to seal the Pioneers win.

This was the fifth meeting between the two schools since becoming Empire 8 rivals in 2012. The away team has won every contest and the Pioneers now lead the series 3-2.
The game was Buffalo State’s first home game in three weeks after games at St. John Fisher, Cortland and Alfred State. Utica was coming off a 23-6 upset win against St. John Fisher.
The Bengals will finish up their home schedule next week against Hartwick for senior day. Kickoff will be at noon.