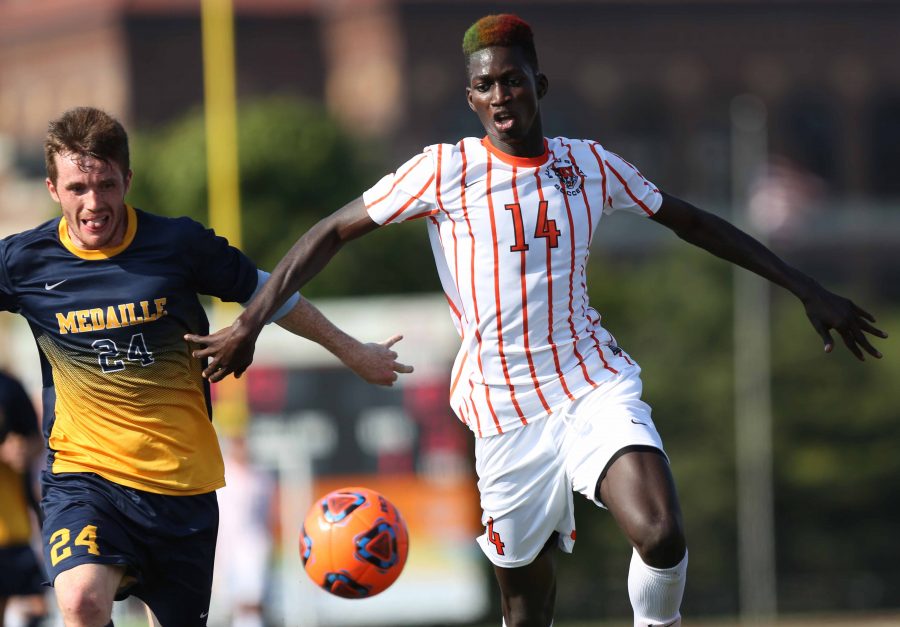 Sophomore midfielder Bass Sarr netted the game-winner in the 61st minute from a through-in from junior forward Tristan Myers.

The Buffalo State men’s soccer team (7-3-1/2-1) lost to Fredonia (8-2-1/2-1) in a game that came down to the final minutes. A four game win streak was snapped as their defense slipped up. In the 3-2 bout, the Bengals netted two game-tying goals, but the comeback didn’t come to fruition.

Fredonia not only broke the Bengals four game win streak but made Buffalo State concede more goals than any game this season. Buffalo State has shut out five different opponents and has only allowed five goals the entire season. The Bengals, who are usually sound defensively, allowed Fredonia’s midfielder Ryan Keller to score with less than four minutes left in the game.

“It’s one of those days,” Buffalo State head coach Mark Howlett said. “It didn’t expose anything, big things happen, it’s the SUNYAC. It’s not a big deal and we’ll come back from this next week.”

“That’s the most I’ve let in during a game in my two years at Buffalo State. Fredonia did a very good job in creating chances and were clinical in a couple,” senior goaltender William Banahene said. “I think Fredonia as a whole, wanted it more early on so it took time for us to settle into the game and match their intensity. Defending set pieces let us down, as we got scored on twice from them.”

Howlett preaches to his team about keeping a “clean sheet.” In layman’s terms, a clean sheet is a soccer term for not conceding any goals or any scoring chances to another team. Buffalo State takes pride in being successful defensively and it’s more than a task, it’s an attitude.

“We are very good defensively and what goes in to our success when it comes to defending is the commitment and willingness we have to win our individual battles,” senior defensive man Daniel Aquilar Lobo said. “A clean sheet means a lot to us and for us to achieve that we have to come prepared to play because it takes a lot of work, and not only does it come from one player on the field it comes from each and everyone of us demanding and organizing each other to do our job.”

Even though Buffalo State didn’t get the clean sheet against Fredonia, they are confident in their abilities. The SUNYAC has tough competition. In the same breath that Buffalo State lost to Fredonia, Brockport (2-5-2/1-2-1) tied Oneonta (8-2-1/3-0-1) the SUNYAC defending champions, who have won their eight previous matches.

After a rough game against Fredonia, Buffalo State is looking ahead to the remainder of the season. The Bengals have a couple of big conference matches next weekend against Oswego on Friday, Oct. 7 at 3 p.m. and then on Saturday, Oct. 8 against Cortland at 1 p.m.