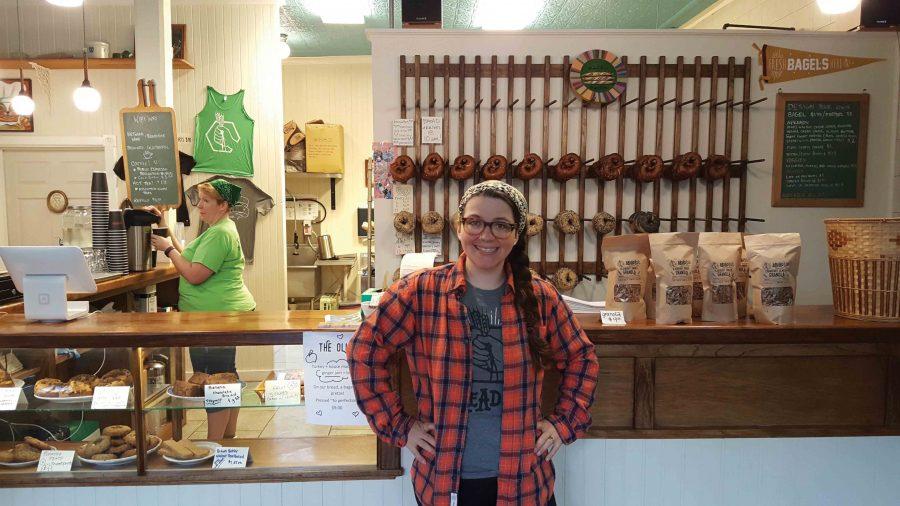 Valerie-Rettburg Smith (pictured above), 29, has been co-owner of the Breadhive bakery since April of 2015.

A new area bakery close to SUNY Buffalo State is making its name known for their great bread and unique ideas.

The Breadhive Bakery, located at 402 Connecticut St., recently opened the doors to their retail bakery this past spring to show off the fresh breads and other baked goods that it has become known for.

The company, which is owned by Allison Ewing, Elizabeth Dashnaw, Emily Stewart, David Hilliard and Valerie-Rettberg Smith, started as a wholesale bakery on Baynes St. After success with wholesale, the owners decided that a retail location was the most logical next step for Breadhive. The owners found the Connecticut St. location to set up shop for the growing business.

Smith, 29, has been an owner since April of 2015. Smith started at the Breadhive as an employee before deciding to become an owner.

“The work experience that they provided for me was unlike anything that I have ever experienced. It was really a no-brainer [to become an owner] for me,” Smith said.

The Breadhive sets itself apart from other bakeries and coffee shops in Buffalo because it is a worker cooperative. This means that workers at the bakery have the opportunity to buy into the business to get equal share and equal vote in any decisions made. Unlike other cooperative businesses, the Breadhive has investors who invest a sum of money but they do not have voting privileges. The workers have all the say in what the business does.

“We believe that equity in your workplace is very important and allowing ownership for people to own the work that they do is something that we feel is important,” Smith said.

All of Breadhive’s breads, bagels and pretzels are produced using a long ferment sourdough process in addition to organic and whole grain flours to create its popular products. The Breadhive also strives to use local farm produce whenever possible to not only create better goods, but to also invest in the community. Breadhive also uses products in their retail store from Public Espresso, a small batch coffee roastery located in Buffalo.

“A man came all the way from Canada to the bakery because he saw us on Instagram,” Smith said.

To future entrepreneurs, Smith suggests talking to a lawyer and accountants before moving forward with business plans, as they offer advice and direction that some business owners do not think of at first.

Smith wants to emphasize the fact that Breadhive was started by three women.

“We are a female-started business, and we really are proud of that. This isn’t to say that we are completely about female power, but it is something that we are really proud of,” Smith said.

As tribute, all of the sandwiches on the Breadhive’s menu are named after female pop singers. From Britney Spears to Björk, customers can expect to get tasty sandwiches and baked goods all made from scratch.