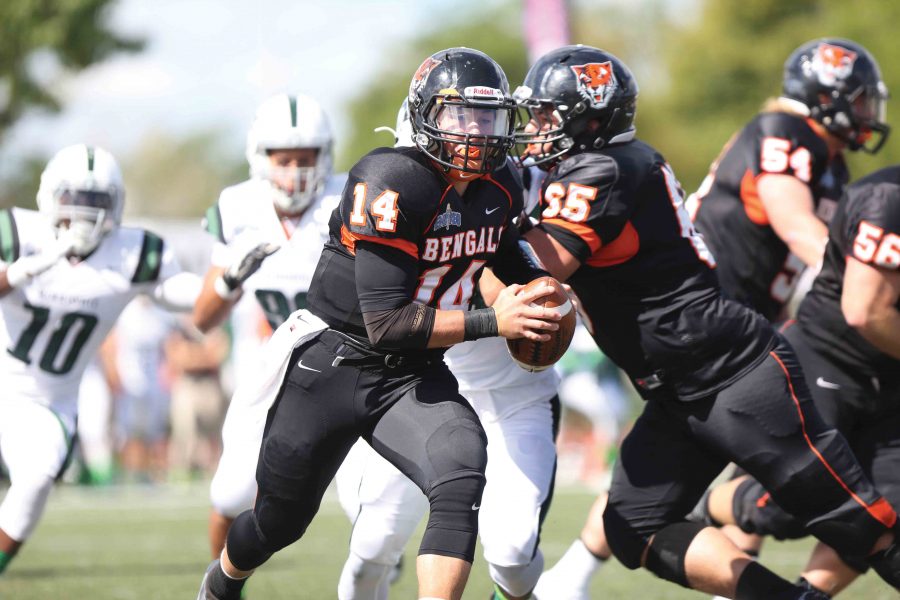 Buffalo State left that rough afternoon behind them by bending, but not breaking, in a 40-24 win over Morrisville on Saturday at Coyer Field.

“You have to have a tough skin,” said Buffalo State senior safety Ish Height, who returned an interception for a touchdown in the win. “Have a tough skin to keep on rolling or the coaches will say something to you. Our responsibility is to keep making plays.”

The final nail in the coffin came when Buffalo State senior defensive back Brett Ellers intercepted a floating pass and proceeded to take it all the way to the end zone. The touchdown was called back, but the interception remained.

“Those two takeaways were huge – especially when you score on interceptions,” Buffalo State head coach Jerry Boyes said. “Unfortunately, an error took that second score off the board, but for the defense to score once and potentially twice in one game, you don’t see that often.”

The offense had a thick skin, too, and responded well after a game to forget. On the first play of the game, Buffalo State senior quarterback Aaron Ertel took a shot to junior receiver Stephen Johnson for a gain of 57 yards.

They gained more yards through the air in that one play than the team had the entire game last week. Ertel’s play improved throughout the game. He finished the game 15 of 28 for 255 yards and connected for two touchdowns, including another explosive play to Johnson for a 66-yard score.

“This game was a big step forward, because now the next team we play is going to have to watch out not only for the run, but for the pass,” Ertel said. “We really are almost 50-50 run and passing. Today we showed that; we ran the ball really well and threw the ball really well thanks to the rest of team.”

Johnson’s touchdown was the first by a player not named Dale Stewart this season. Stewart, a junior running back, had a quieter game this week, but continued his scoring ways with a 17-yard scamper on the first drive of the game.

The Bengals fast start led to a 20-3 lead going into the half. The second half was a different story.

Height began the second half with an interception return of 46 yards to the house to expand the lead to 27-3. The Mustangs then pulled starting quarterback Cory Benedetto and put in sophomore Brandon Gwinner.

The Mustangs blocked a 37-yard field goal attempt by Buffalo State senior kicker Marc Montana, and the momentum swung from there.

“That play was a pretty significant piece of the game because they took it and scored off of that,” Boyes said.

Morrisville had a star of their own in wide receiver Marcus Jackson-Conner. The 5-foot-9, 150-pound junior led all players with 14 catches for 172 yards, including a circus one-handed grab in the second quarter.

Though the scoring took a complete 180, Buffalo State prevented the comeback and did not break. The Bengals responded with an eight-play, 65-yard drive that ended with senior tight end Nick Jones hauling in a 9-yard pass to put the Bengals up two scores.

Bengals’ junior running back Antoine Holloman finally got an opportunity and capitalized with a 12-yard third down run, and then finished the drive off with a score from a yard out to put the game fully out of reach.

The Buffalo State running backs ran in a committee. Stewart had 72 yards and a touchdown on 13 carries. Senior Tre Jones added eight carries for 91 yards. Holloman carried the ball six times for 30 yards and a score.

“We have a very young football team. We talked about having to muster through the early stages of the season, and if we do, I think we are going to eventually be a very good football team,” Boyes said. “Are we there yet? I don’t think so, but we have shown spurts. We have to build on that, and players have to find comfort zones to gain confidence so they know that they can go out there and beat anybody.”

Buffalo State will go on the road for the first time this season on Saturday at St. John Fisher for a 1 p.m. kickoff.