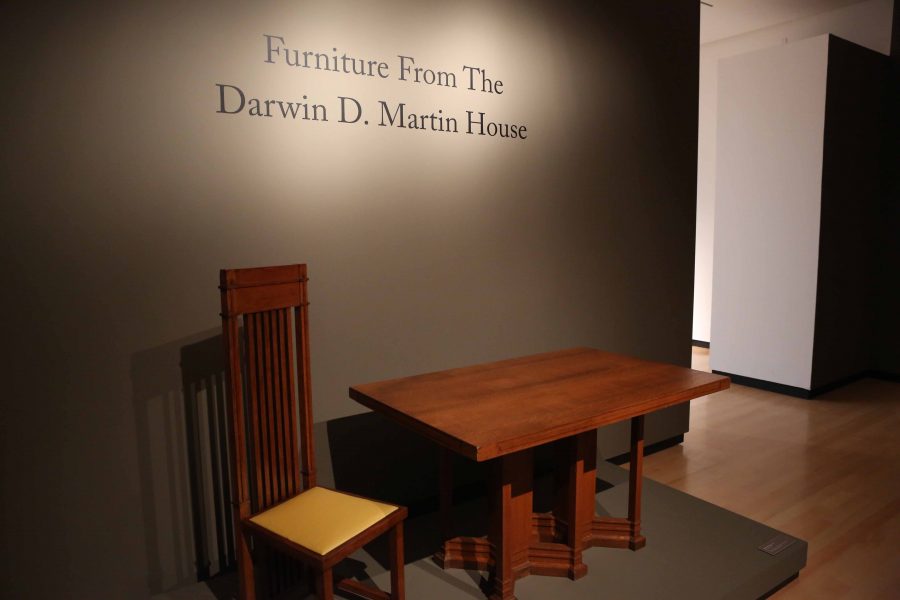 The Burchfield Penney Art Center at SUNY Buffalo State is extending display of “Furniture From The Darwin D. Martin House” until the middle of next week.

“Furniture From The Darwin D. Martin House” includes a pillar chair, which is an oak chair that seats low, but the back of it stands tall. Others included a tan sofa, a circle-in-the-square table, a column base table, and a cabinet base table.

Frank Lloyd Wright designed 55 pieces of furniture for the Darwin D. Martin House, where a small portion became viewable at the Burchfield Penney Art Center while the “Restoration Program” of the Frank Lloyd Wright’s Martin House resumed. The restoration program became enacted to restore the famous Darwin D. Martin house back to its condition of 1907.

According to Wright’s concept of integrating buildings with nature, the gardens and grounds of the Martin House were designed together with its architectural features of the site. A fully recreated landscape is a main striving point in the restoration program.

Now in the fifth and final major phase of restoration, nearly $45 million has been raised to date in support of the restoration program.

“I’ve always been a fan of Frank Lloyd Wright ever since I went on field trips to the Darwin Martin House as a kid,” said Erie Community College sophomore Chris Polland. “I read a lot about Frank Lloyd Wright, and how he designed a lot of buildings such as the Larkin Building that use to be in Buffalo. Anything Buffalo related, I tend to be a big fan of.

“Especially since I’m going to school to be a history teacher, I feel as if the need to know who designed my own home town is necessary. Especially someone like Frank Lloyd Wright who was a huge innovator.”

The Larkin Building was designed in 1903 by Frank Lloyd wright which included many innovations such as air conditioning, stained glass windows, built-in desk furniture, and suspended toilet bowls. The building was located at 680 Seneca Street, but was demolished in 1950.

The same style of furniture from the Larkin Building ended up being very similar to the furniture that was in the exhibition held at the Burchfield Penney Art Center from the Darwin D. Martin House. This is due to the fact that Frank Lloyd Wright had a similar style of design amongst all of his furniture, glass, landscape, and buildings.