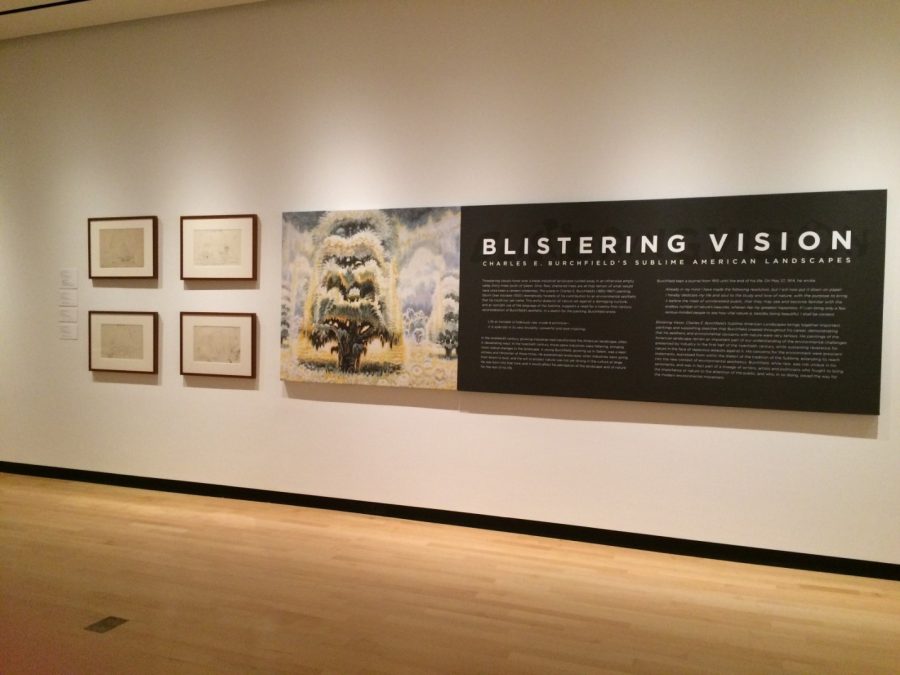 This exhibition focuses entirely on the impact industrialization had on the environment and the period of transition in nature, seen through Burchfield’s eyes. This collection features paintings, blueprints and sketches alike, all intertwined with each other to depict his bitter emotions toward the destruction of how we viewed our surroundings, more specifically, his hometown of Salem, Ohio.

Common themes of these pieces were soft and fluid brush strokes of bleak pastel colors, if any color at all. Some of the works featured a poem to correlate along with the artwork, such as “Untitled (Sulphur Polluting the Beaver), 1916.” Some sketches and paintings overlaid each other almost as if he was depicting a “before” and “after.”

Ron and Susan Wszalek, residents of Kenmore, came to see this unique melting pot of artwork.

“I like parts of the exhibit,” Ron Wszalek said. “I think his style isn’t one that is warm and fuzzy, so it’s difficult to say it’s enjoyable.”

“Some of the pieces really spoke to me such as the house of fire because they were depicted as reality. Things that I could really relate to. I think the feelings and words really had the most affect on me.”

“I like the idea that this whole art center is local,” Susan Wszalek said. “Burchfield’s work is a bit dark but I like the environmental aspect of it because this is what’s actually happening in the world.”

For somebody who’s grown up in the world of industrialization and rapid-paced technological advances, one may find it amazing to see the world through Burchfield’s eyes – somebody that grew up during the huge transition and genuinely cared about more than just the aesthetic aspect of nature, but the necessity for it.

From 1910 until 1914, Burchfield kept a personal journal that explained his anger toward the ignorance of people’s knowledge about what was happening to the environment.

“Already in my mind I have made the following resolution,” he wrote. “I will now put down on paper; I hereby dedicate my life and soul to the study and love of nature, with the purpose to bring it before the mass of uninterested public.

“If I can bring only a few serious-minded people to see how vital nature is, besides looking beautiful, I shall be content.”

“Blistering Vision” is now open to the public until Oct. 23.