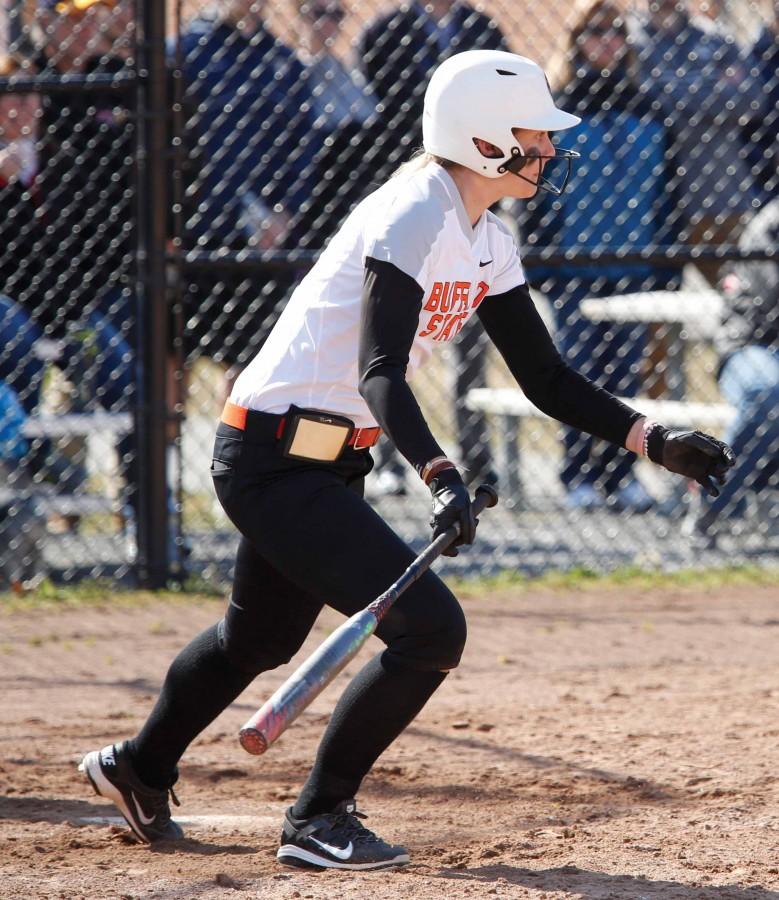 Bengals are looking for their first win going into spring break where they will travel down to Florida.

Buffalo State’s softball team has clinched a playoff spot after a strong finish to the season saw them go 9-4 in their final 13 games.

In an up and down season, the Bengals started out quick, going 6-3. After a long two-week layoff due to inclement weather, the team struggled and found themselves at 9-14. By the end of the season, they had clawed their way back into playoff contention with a .500 record at 18-18.

With four games left in the season, a playoff berth was all but certain. On April 29, the Bengals went on the road to Geneseo and split a double header. They won game one 9-5, but then got blown out in game two, 13-5 in a game which sophomore infielder Danielle Szymkowiak went three for three.

In game one, the long ball was the difference as a couple of seniors hit three-run homeruns, pitcher Lexi Haley and second baseman Stephanie Novo. Novo ended the game with five RBIs.

The Bengals would travel to Brockport for the last couple games of the season. They would split them, losing game one, 5-4, before winning game two, 9-0, and clinching a playoff spot with an exclamation mark.

“It’s very satisfying that we pulled through and gave ourselves a chance to keep playing,” said Novo.

Homeruns from Novo and Haley were wasted in game one. When game two came around, Haley made sure to take care of business. She belted another homerun and totaled four RBIs along with pitching a two-hit shutout for her 14th win of the season.

“I would say the turning point was probably Oneonta and New Paltz,” said Novo. “That was really a rough weekend for us, but I think that’s when we all realized we’re too good to be losing the games we were losing.”

Senior third baseman Jean Stahl had a strong regular season. She led the team with a .400 batting average along with 36 hits and 12 RBIs.

Senior second baseman Stephanie Novo gave the Bengals a little more power presence in the middle of the lineup. She posted a .377 batting average and belted five homeruns in 49 hits and collected 25 RBIs.

Senior outfielder Chrissy Rennard and senior first baseman Sarah Gorski were both solid at the plate. Rennard sported a .324 average along with 36 hits and 31 RBIs. Gorski’s average was slightly lower at .300, but she still managed to bang out 33 hits and plate 19 RBIs.

Lexi Haley could arguably be the team’s MVP considering what she does in the circle and at the plate. Haley pitched 151 innings this regular season, posting a 14-9 record while sporting a 2.87 ERA. She also led the team with six homeruns along with posting 39 hits while tallying 23 RBIs and a .368 average.

“I think our whole senior class is our heartbeat,” said Novo. “We have a very strong senior class and I think the underclassmen not only look to us for leadership, but I think they look up to us on the field when we play too.”

Sophomore Danielle Szymkowiak was an underclassman that took on a huge role. In the regular season, she posted a .311 batting average along with 28 hits and 21 RBIs.

The Bengals will start the playoffs on the road against No. 1 Cortland on May 5. Cortland sports a record of 31-9 and 11-1 at home. As a team, confidence is key and the Bengals have plenty of it.

“This is the most important time of the year to start peaking,” said Gorski. “We all believe in each other and we know that we’re a good team.”

“Obviously we have higher goals than just making the playoffs,” said Novo. “I don’t think we’re beatable when Lexi is throwing well and Lexi, Chrissy, Jean, Sarah and I are hitting well.”

Throughout the regular season, the Bengals averaged 5.7 runs scored per game while giving up 4.9 runs per game. To have any chance against Cortland, the bats will have to pick up from where they left off and Haley will need to continue to pitch lights out.

“This is a high-scoring conference, so it make for high-scoring games,” said Curran. “Most of the team has gotten comfortable and we’ve been able to outscore our opponents. Hopefully Lexi can continue to throw the way she has been and we’ll have a chance.”

Buffalo State and Cortland met back on April 13. The Bengals hosted Cortland in a doubleheader and Cortland won both games, 6-3 and 3-1.

The Bengals will look to have a different outcome against Cortland this time around.