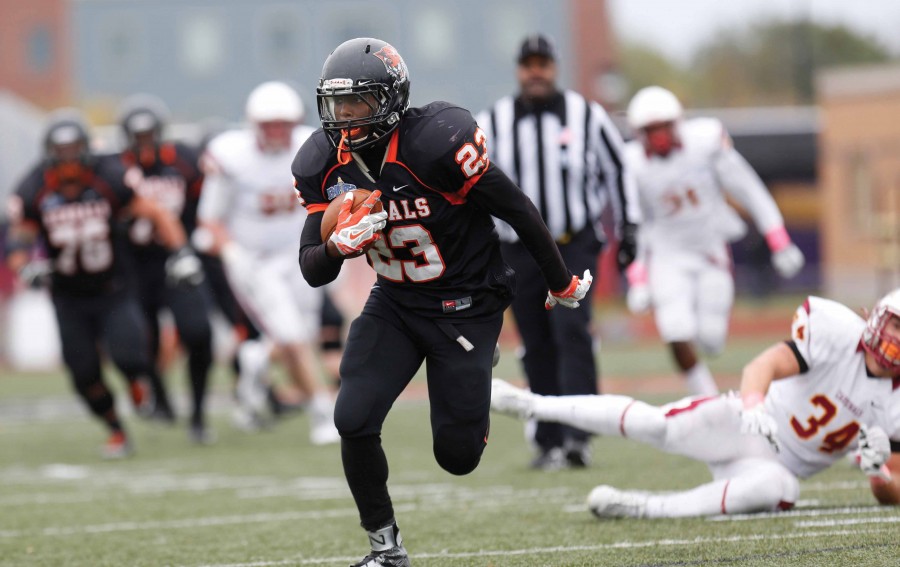 Another schedule of spring practices have come and gone as the Buffalo State football team closed its 2016 spring ball docket of practices on Thursday.

The Bengals are coming off a 7-4 season that saw them go to a second straight bowl appearance, this time falling short 20-13 against Rensselaer Polytechnic Institute (RPI) in the ECAC ASA S. Bushnell Bowl.

Head coach Jerry Boyes enters his eighth season in his second stint with the program. Buffalo State will look to build on the success of its previous two seasons come fall.

Here are seven key questions that need to be answered heading into this coming season:

Where is Kyle Hoppy in his rehab?

The senior quarterback had his 2015 season cut short by an ACL tear in the Sept. 19 game at Alfred. From there, the Bengals played the hot hand for the remainder of the season at the quarterback position, switching between Aaron Ertel and Dan Serignese. Both Ertel and Serignese had an up-and-down season, with both struggling mightily at times. According to Boyes, Hoppy’s rehab is right on schedule and he is progressing well. Hoppy will start fully running in the summer and should be ready to go by the season opener on Sept. 3rd against Otterbein. The Bengals will need his veteran presence.

Who will step up at wide receiver?

Last offseason, the Bengals were looking to replace two All-Empire 8 receivers in Mike Doherty and Ryan Carney. This season, questions still linger at the wide receiver position after a 2015 campaign during which they weren’t answered and Buffalo State relied heavily on the ground game. The leading receiver Madison Wesolowski had 26 catches for 330 yards and a touchdown. A true number-one receiver will need to step up and aim to double those figures if the Bengals want to be considered a threat through the air. Wesolowski will return for his senior year and Stephen Johnson will return for his junior year. Johnson led the Bengals with four receiving touchdowns.

Senior running back Tre Jones and backfield partner Dale Stewart will return to build on a strong 2015 season. Jones gained 925 all-purpose yards and led the Bengals with 13 touchdowns – 12 rushing and one receiving. Stewart led the team with 1,071 all-purpose yards with nine rushing touchdowns. This one-two punch will continue to lead Buffalo State’s run-heavy offense that averaged 189.8 yards per game last season. A strong running game coupled with a stout defense could see the Bengals having similar or better success than last year.

Starting the O-line from scratch

The entire offensive line that opened holes for Stewart and Jones is no longer. All five starters will have to be replaced. The Bengals will surely miss stand-out All-Empire 8 tackle Brandon Lathrop. It will be interesting to see who fills all the holes on the offensive line.

Who will anchor the Bengals defense?

Gone are the three leading tacklers from last year: Marquis Artis, Shaq Frederick and John Alessandra. The trio combined for 272 tackles, four forced fumbles and two interceptions. The leading pass rusher in 2015, Andrew Cleveland will also have to be replaced as will standout defensive end Dez Howard. The emotional leader for the Bengals, safety Mitch Thomas also graduated.

With the exception of Thomas, the Bengals secondary will remain intact. Safety Will Cheshire will be back along with the ball-hawking cornerback duo of Rey Jordan and Ish height. The pair combined for seven interceptions in 2015.

Kicker Marc Montana had a solid 2015 campaign after a record-breaking 2014. Montana went 6 of 9 on field goals and had a long of 49 yards. Montana remains a weapon for Buffalo state and will continue to be a special teams asset in his senior season.

What will the learning curve be for a youthful team?

This year’s will be a young team considering all of the veteran talent which is no longer here. New players will have to fill leadership roles and the new recruits will have to step up right away. Who will stand out? Are there new recruits who make an impact immediately?

Boyes is adamant about maintaining a winning culture and building from the success of the past two seasons. Doing well on and off the field is the aim for this team. It will be a crucial, telling four and a half months until the season opener. As a young team with all the necessary building blocks in place, this Buffalo State Bengals football team is equipped to win. Whether or not they will be ready to do just that come November is still a question mark.