Runway a major success for fashion and textile technology 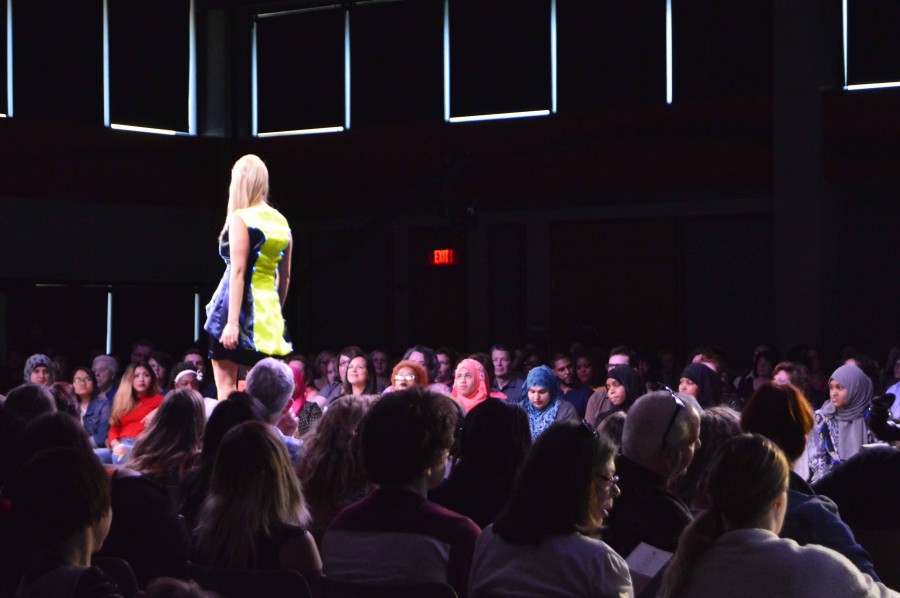 Runway 9.0 featured a stage with white t-shirts strung together for the set design.

Students from the fashion and textile technology department went through a jury selection to have their clothing lines featured. Work was broken down into a few categories, including Single Items, Charles E. Burchfield Collection, Student Collection and Senior Designers.

This year’s theme was Eco-lution; ecology plus evolution. Students’ work was focused on using natural products while being mindful of the consumer society we live in.

“This was one of the best shows we’ve ever done,” said Erin Habes, fashion and textile technology lecturer.

Habes was in charge of the show, and was impressed by how the fashion and set designers handled the theme.

“They did a great job for how weird our set design was,” Habes said.

Keeping with the Ecolution theme, the white t-shirts that were strung together for the set design are being donated back to Goodwill, Habes mentioned.

Habes was also impressed by the opening dance act. She was proud to work with such professional students and plans on having them back for Runway 10.0

“From the producer standpoint, they did a great job getting the audience’s spirit back up after the tribute video to Elaine Polvinen,” Habes said.

Polvinen was a fashion and textile technology professor at Buffalo State. She died of cancer in October 2015.

Also featured at the show was a touring collection from the Teacher’s College of Beijing Union University. Creator Bi Yinewi displayed his all-white collection.

Andrew Johnson won the Senior Collection portion of Runway for his line, Organism. The inspiration for his line came from an art piece by Phillip Stearns, “A Chandelier For One of Many Possible Ends,” Johnson said.

The piece is composed of groupings of 92 individual light elements, each representing the electrons in a Uranium atom. The lighting fixture responds to any radiation detected in the room it is displayed by flickering and lighting up.

“The structure is big enough that if they were all to light up at the same time, it would kill any living organism,” Johnson said. “This is why I call my collection Organism.”

Johnson designed the fabric prints in his collection to appear to have criss-crossing light shards. “I wanted it to be like an on and off pattern, so that is why I have the inverse print in my collection.”

In the future, Johnson is thinking about starting his own company or working for an established brand. He said that design is his passion and that he will be happy just to find a job.

“Through this experience, I feel like I want to do the next collection now,” Johnson said. “It all kind of relates, I’m excited to think of what the next one will be and how it relates to the first one.

“The fashion industry is one of the biggest producers of pollution and environmental damage. Thinking about what kind of clothes we are wearing and how long we wear them for, I wanted to create garments out of natural fibers.”

All of the pieces in his line were made from 100 percent silk or cotton. Johnson chose these fibers because their ability to decompose at landfills.

Bourcier found her inspiration in a unique place, from her dog. By breaking the theme into its two components, she was able to develop her line. Using her love for animals, technology and fashion, Bourcier was successful.

“I took a picture of my dog’s brindle coat and used that as the inspiration for a fabric print. I had it printed on cotton, fake suede, and performance knit. I also paired the print from fabrics I found at Jo-Ann’s,” Bourcier said.

Through her work, she wanted to expresses that you don’t need real fur to feel beautiful and confident in your clothing.

“I hope one day the fashion industry adopts my idea of making fake fur prints to look like the real thing,” Bourcier said.

Bourcier said the show went well and ran smoother than any of the past shows she participated in.

“Creating a collection takes a lot of time and effort,” Bourcier said. “It’s hard coming up with a cohesive line and then creating that idea into a physical garment.”

Bourcier is grateful for the experience the show was able to provide her with. Runway provides students with the opportunity to learn all part of a fashion show, from the clothing to the photo shoot, and discovering hidden talents.

“Without this experience, I wouldn’t have any idea where to begin if my future boss wanted me to start putting together a show,” Bourcier said.

Bourcier is thankful for every minute of her Runway experience.

“If I’m able to come back as an alumni in a few years, I will do so,” Bourcier said.

Habes described all students she worked with as incredible. She’s been receiving praise from all people regarding the how well everyone did.

AnneMarie Guerdan, one of the designers featured in the show, and who has also competed in past shows, said that this was the first time that she has experienced that the show was so organized. “Last year it was almost like a free-for-all, we ended up showing two hours late and people were exhausted,” Guerdan said. “This year the show and the competition were both strong.”

“The competition was very tough because of how hard each student worked this year, it showed in their designs, everything was beautiful. No one should be upset that they didn’t win, I don’t even know how the judges could decide.”

Guerdan’s collection, named ”Undertow: The Bridal Collection That Will Sweep You Off Your Feet,” consisted of wedding dresses inspired by life emerging from water.

“The best place to find inspiration is the environment. We ourselves are nature, and so is everything around us,” Guerdan said. “If you don’t pull from nature, you’re kind of silly because you’re missing out on so much inspiration.”

Instead of bouquets for her collection, she used coral and a conch shell, and she also used blue to play on the expression, “something borrowed and something blue,” while also displaying the water theme.

Habes has already started preparing for Runway 10.0. The process of putting each show together takes a year and a half. Next year’s theme has yet to be decided.

Many of the design students are already planning for the next show which will take place in the spring semester of 2017.

“I encourage students to go, even if you’re not into fashion. The event as a whole is fun, and it means so much to the designers for people to come out and support their work. You might be surprised as to how much you enjoy it,” Guerdan said.