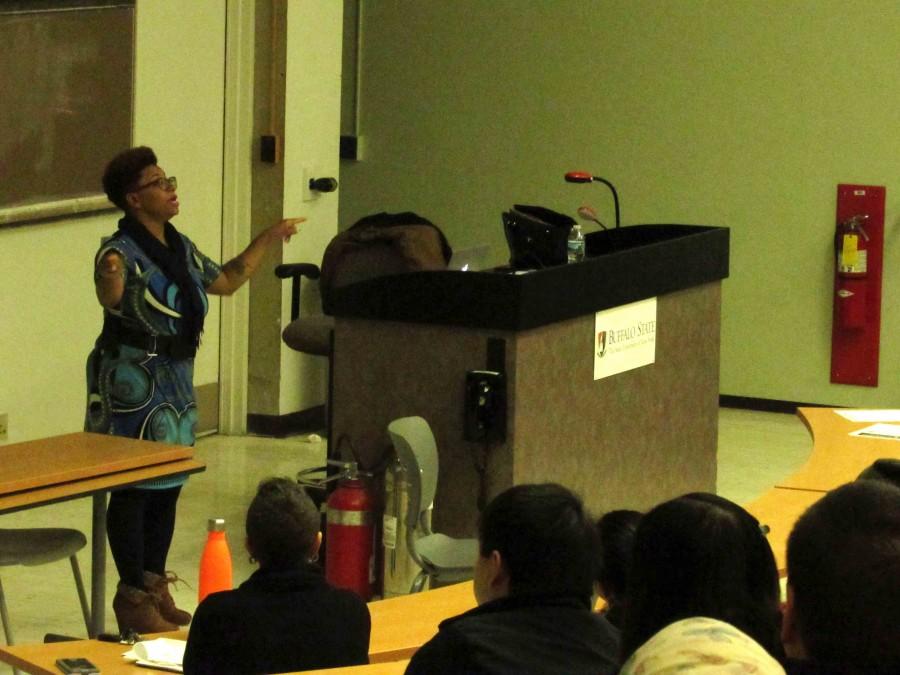 Dr. Zandria Robinson’s lecture, “Diversity is Not Enough: A Fantastic Voyage through the Language of Racial Inequality,” was filled to capacity on Thursday. Students of all ages, races and religions came to hear Dr. Robinson’s message of the urgent need to address inequality.

“Race is not going away. We need to the tools to protect us from systems of oppression,” Robinson said.

The event was lively, sprinkled with clips from Key and Peele, The Boondocks and references to South Park. Dr. Robinson’s sense of humor came across as she volleyed questions about racism and inequality.

“It’s the middle of the night and Huey (from the Boondocks) has been having this dream where he makes the white people riot with his racial truths, right… Jesus was black, Ronald Reagan was the Devil, the government was lying about 9/11. These are racial attitudes we can find prevalent among African-Americans if we only ask,” Robinson said.

No stranger to controversy, Dr. Robinson left the University of Memphis after a series of controversial tweets including, “Whiteness is most certainly and inevitably terror.” She was soon hired by Rhodes College for her “extensive understanding of the complex problems of race in American society.”

Dr. Robinson’s Rate My Professor grades from the University of Memphis are an average of 3.9 or A- with student statements ranging from, “One of the best teachers and people I have ever met,” to “She passes the time by making colorful comments that will make your jaw drop!!” and “Worst professor I ever had.”

When asked about the upcoming election, Dr. Robinson stated she is voting for Bernie Sanders, though she questions the value of elections.

“I can’t say for sure if my vote counts, but I’ll do it anyway.

“I like Bernie. I like the populist message that he has. I think just a basic message about thinking about economic inequality is important to me and that is something that touches everyone. I know that he won’t make it, but that is where I am.”

When asked about Donald Trump, Dr. Robinson said a large portion of “white people are holding onto this narrative ‘we are the hard workers’ in communities that have been completely destroyed.”

“The work hard narrative is a coping strategy, but so are drugs in the community,” Robinson said. “So yeah, I have lots of thoughts about that as you can see, about what is better and what is not. I think everybody should vote, but boy I tell you, do any of our votes matter? Do any of our votes matter in an electoral college where you got blue cities and red states?”

Does she think her vote counts?

In regard to racial tension on SUNY Buffalo State’s campus, Dr. Robinson referenced the Black Cross Project, the 300 small black crosses that signified the 300 unarmed people of color who have died in police custody or were killed by police officers since 2012, placed in front of the Horace Mann Quad.

“I was disturbed by the Black Cross videos,” Robinson said. “They weren’t things that were out of the ordinary from what I’ve heard on campuses because I’ve been going all around, but it made me wonder what the racial climate is like here if there were so many people with these videos that deny the experiences of certain groups.

“I will say the videos gave me some pause.”

In the discussion following the lecture, Dr. Kevin Miller, head of the exceptional education department, shared his experience teaching at the University of Central Florida.

“It took two and a half years being a white male to actually get some buy-in from parents that it was ok for their kids to interact,” Miller stated. “Which is tied into this point that the distress level is so high in some areas that even when you are trying to help out, we lost two years of time that we could have been doing some things.”