Call for new wave of rock answered by Spring Fling 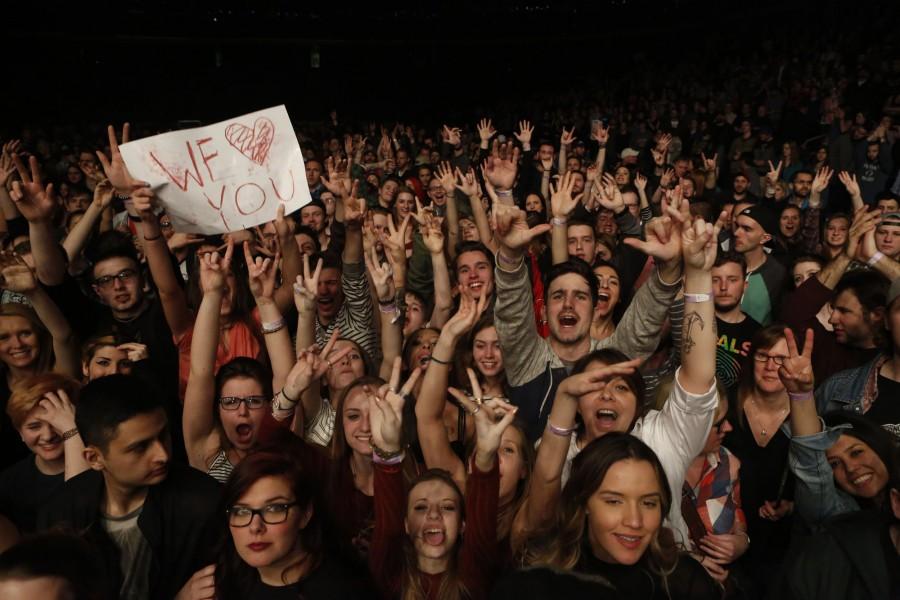 Alt. Buffalo fans get rowdy for a photo during Cage The Elephant's encore performance on March 28.

Even on the Monday after Easter – or as it’s better known in Buffalo, Dyngus Day – there ain’t no rest for the wicked. Four bands each brought their unique brand of indie rock to Alternative Buffalo’s Spring Fest at First Niagara Center on March 28.

Alt. Buffalo 107.7 has grown from what was originally perceived as a grassroots alternative radio station to an alternative rock powerhouse, booking alternative and indie bands big and small relentlessly to play at venues all over Buffalo. This time, they brought Bear Hands, Foals, Silversun Pickups and Cage The Elephant to the well-deserved grandeur of the FNC.

Alt. Buffalo made sure not to steal the spotlight from Spring Fling, announcing this summer’s Bloc Party and AWOLNATION-headlined Kerfuffle the morning after.

Cage The Elephant returned to Buffalo for the first time since headlining the much-anticipated inaugural Kerfuffle in July of 2014 and dominated the evening. Indie rock bands no longer have to worry about how big they get; indie rock has transcended its bigtime record label-shunning roots and has carved a considerable niche into the mainstream rock scene. Cage The Elephant – offering a diverse array of indie delights with a punk rock attitude – has drawn rave reviews from the most respected rock media outlets.

Tennessee-native rock and roll cowboy Matt Schultz walked onto the stage of First Niagara Center, parted his shaggy hair and peered at a well-warmed up crowd before offering everything from heartfelt, hazy confessions like “Cigarette Daydreams,” to angsty, lustful headbangers like “Aberdeen,” to material off the band’s brand new album, “Tell Me I’m Pretty.” The white and red leather jacket-clad lead man waltzed around the stage like he owned it. And at least for the night, he did.

Delivering a worldly vibe, British indie rockers Foals followed Bear Hands and played an outstanding, energy-filled light show, a set worthy of being the closing act at any event not including Cage The Elephant.

Lead man Andrew Mears wore the emotion of every song on his face, grimacing through the cold, dark chords of “Mountain at My Gates” and confidently and keenly delivering a moment of clarity in “My Number”.

Alternative and indie rock, especially, are typically characterized by subdued vocals and more relaxed tempos than progressive rock genres. Foals and Mears, however, venture into the uncharacteristic realm of screaming in the adrenaline rush of an outro to their hit song “What Went Down.”

Thoughtful, brooding lyrics and creative, catchy beats create an inviting atmosphere around Foals, the only band on the four-piece lineup which crossed the pond for the Spring Fling tour. Foals has all the potential to sail the seas of indie rock stardom if they keep doing what they have been.

The most memorable song from Silversun Pickup’s set list was “Panic Switch,” a track which alternates between fluttering and forceful guitar and narrates an instance of hushed paranoia.

Hailing from Los Angeles, Silversun Pickups lent a cool and melodic, sunny west coast vibe to an east coast arena on an otherwise drab Buffalo evening, and left the crowd with just enough energy to give as much of themselves to Cage The Elephant as the headliner demanded.

The spirited crowd – a mix of mostly teens and twenty-somethings – were rewarded for breathing life into a youthful, new-age rock and roll scene lacking the legend of decades past. Millennial rock fans see your Mick Jagger, and they raise you Cage The Elephant’s Matt Schultz – literally. The band’s lead man capped off an engaging performance by crowd-surfing through a sea of star-struck front-row fans while belting out the chart-topping song which is as great a life lesson as it is a song, “Ain’t No Rest For The Wicked” to close out the energy-filled evening.