REMEMBERING ONE OF OUR OWN: Beloved student commemorated by community 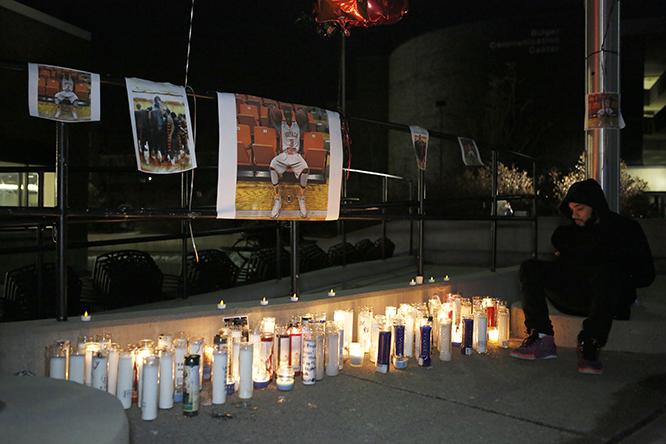 A Buff State student mourns the loss of Bradley Doyley following the candlelight vigil on Sunday night in the Student Union Quad.

Doyley, a 21-year-old from Brooklyn, was a business student and a former player on the men’s basketball team. He was set to graduate this spring.

Buffalo Police are still investigating if an alleged fraternity hazing incident was the cause of death. The chapter Delta Epsilon, of the national Alpha Phi Alpha fraternity, has been suspended by Buffalo State and the chapter’s national governing body. The Buffalo News reported Monday that an autopsy done by the Erie County Medical Examiner’s Office confirmed there were no signs of hazing or foul play, although toxicology results coming out as early as a few weeks will reveal the exact cause of death.

“We’re not really sure what happened. Brad was definitely one of the happiest teammates I’ve had at Buffalo State,” said Jordan Glover, junior guard for the men’s basketball team and Doyley’s former roommate. “Whether we were up or we were down, he was never negative. He was very energetic – he could light up a room.

“I know it sounds like a cliché, but I really mean it when I say that he cared about others more than himself. He always checked up on others no matter how he was doing.”

Doyley played basketball for two and half seasons for the Bengals, including starting four games in 2014-15 before leaving the team. His best season came as a sophomore in 2013-14 when he played in all 25 games (21 starts), and averaged 8.7 points-per-game and 4.8 assists-per-game. He also hit a memorable 70-foot, three-quarter court shot at the halftime buzzer against Cortland.

“He was a good teammate; he had a lot of energy,” said Fajri Ansari, who coached Doyley last season. “He was enthusiastic about the game, it was fun.

“He wanted everyone to have success. He was certainly a team player. He wanted to win, but he wanted everybody to share in that, from the starters, all the way to whoever was the last person on the bench.”

Glover said he first met Doyley during a campus visit his senior year of high school. He said their friendship developed over the principles of friendly competition and trying to help motivate one another.

“It’s kind of funny because the first conversation Bradley and I had, he asked me, ‘What position do you play?’” Glover said. “And I said, ‘I play point guard,’ and he said, ‘Well, that’s the same position I play, so you’re going to have to work hard for it if you’re trying to play.’ And from that moment, I knew that Brad and I would be very, very, very close because I knew he was a competitor and I’m the same type of player. And that’s what kind of brought us together.”

A moment of silence was held by the men’s basketball team before their game against SUNY New Paltz at the Sports Arena on Friday night.

A fundraiser was also held during both the men and women’s basketball games Friday to help pay for Doyley’s funeral expenses. The fundraiser raised $1,500 in just a few hours.

“It was very emotional, but I’m very proud of the players,” Ansari said. “They really dug down amidst adversity.”

Many students came together on Sunday night to hold a candlelight vigil in the Campbell Student Union Quad to remember and honor Doyley.

“He was a valued member of the Bengals men’s basketball team during his first two and a half years on campus and was well regarded by his peers, professors, and former coaches,” Buffalo State President Katherine Conway-Turner said in a statement. “His loss will undoubtedly be felt throughout our community. My heart goes out to his cherished family and friends.

“I have heard many speak of him with friendship and fondness,” Conway-Turner said in a later blog post. “I have listened to his family members express the love and respect that characterized the family’s memories of Bradley. Although he is no longer with us physically, Bradley will always be a member of our Buffalo State family.”

Conway-Turner also said in her latest blog post that Buffalo State Counseling Center staff members will continue to be available to support students, faculty and staff struggling with the loss. Anybody who would benefit or knows someone who would benefit is asked to call (716) 878-4436.

Many students reacted to Doyley’s death on Twitter, with many tweeting #ForeverBrad. Some of the tweets can be seen on the bottom of Page 1 of this week’s print edition.

A memorial service will be held today at noon in the Houston Gym. The service is open to all.