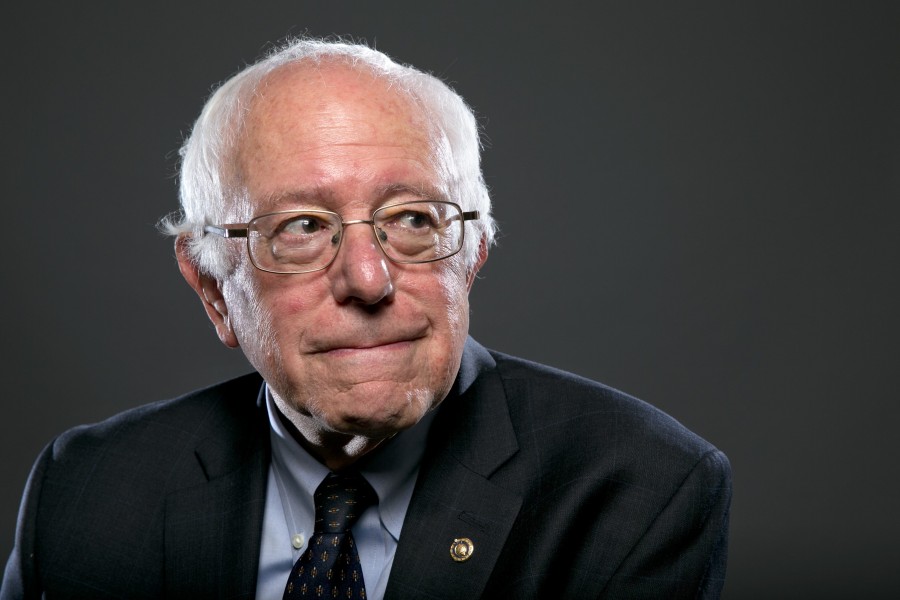 He’s an uber-liberal Democratic presidential candidate, a senator from Vermont, and a 74-year-old Brooklyn native.

His political agenda, which includes raising the federal minimum wage to $15 per hour, lowering college tuition, the legalization of marijuana and fighting big business, is the groundwork for a potential political and economic revolution.

His name is Bernie Sanders. But to many – namely his massive following of young people who praise him on social media – he is known simply and affectionately as Daddy.

I slid into the Twitter DMs (direct messages) of some of those loyal Bernie supporters to find out exactly why they address him this way.

Some teens look up to Bernie as a literal father-like figure who serves as a moral compass.

“I call Bernie Sanders Daddy because he is always watching over me. Every time I consider doing something bad, like hard drugs, or not paying the meter, I hear a heavy Brooklyn accent echoing in my head, talking about the shrinking middle class. It’s my Daddy, Bernie Sanders, telling me to rethink my actions,” said Breanna Ghazali (@JollyGhazali), a 19-year-old Des Moines Area Community College student from Urbandale, Iowa.

“I call Bernie Sanders Daddy because he has all the qualities of a steadfast father: loyal, loving, supportive – he’s like the type of dad who shows up to your soccer game, and even if you don’t win, he buys you ice cream. He believes in you, he respects you – especially as a young woman – and he wants the best for you,” said Kiara (@kgdrue), an 18-year-old DePauw University student from Greencastle, Indiana.

Some teens call Bernie Sanders ‘Daddy’ because it’s funny, even though his campaign is no joke.

“The reason I call Bernie Sanders Daddy is because of the humor in saying that. And also because he’s been able to win over people on social media, not by trying to be funny, but by talking about issues that matter to young people like college affordability, universal healthcare and minimum wage. Once you win over teenagers, all the jokes and memes will come naturally,” said Ben Forte (@BEEN_JAMM1N), a 19-year-old Butler Community College student from Wichita, Kansas.

I’ll let Jack White field this one: “Hey Americans, what, nothin’ better to do? Why don’t you kick yourself out? You’re an immigrant too.”

“Bernie is Daddy because he actually knows what he’s doing. He genuinely cares about the working class and younger people rather than the GOP, who seem to only care about helping the rich stay rich and literally deporting everyone that’s not white,” said Noura (@nochillnoura), a 17-year-old from Gainesville, Florida.

Bernie is their Bill Clinton.

“With his age and his status, I’d love to be his Monica Lewinsky,” said 18-year-old Kody (@k_horvath23), a Florida State University student from Tallahassee, Florida.

They have daddy issues, and Bernie knows how to solve them.

“I call him Daddy because I have deep-seated Daddy issues and I need a father figure in my life. Also his drug policy is my shit,” said Chris (@crasstopher_), a 22-year old Michigan State University student.

He’s famous and important, and therefore he should be addressed strictly as “daddy.”

“Well, at the base of it, it was to join in on the meme of calling him daddy. You see this “daddy” thing on Twitter a lot with famous and important men,” said Lucas Coberly, (@hipstersandwich) a 20-year old University of Arkansas student. “It’s usually reserved for men that people look up to, and since I look up to Bernie and also wanted to be in on the joke, I decided to call him daddy.”

“I call Bernie Sanders Daddy because he WOKE, he CUTE, he FINE, and he old,” said Will (@EGGSERCISE), a 15-year-old from Salt Lake City, Utah.

They believe he is their actual father as he is the first being they gazed upon after hatching out of their Twitter egg.

“I call Bernie Sanders Daddy because he is Daddy. He knows exactly what the millennials want and everything he says just makes me go ‘YASSSSSSS!!!,” said Lauren Pellegrino (@TrippyLoner), a 20-year-old Valencia College student from Orlando, Florida.

“I do it to be humorous for the most part, but I do think it speaks to our generation as a whole that someone who looks like Bernie Sanders gets called “Daddy.” He’s not a bad looking man, it’s just that it’s his mind we’re attracted to. Bernie Sanders is Daddy as F because he cares about my rights. I can sit on his lap and call him “Daddy,” and he’d still give me the respect I deserve. That makes him the epitome of “Daddy,” said Alex (@tophatstevie), a 20-year-old from San Pedro, California.

They believe in what he stands for.

“I am a teen and I can admit I’ve called him Daddy multiple times. I believe many teens do it because they think he’s pretty cool and they like some of the points he stands for. The others are probably just following the trend,” said Meme (@badpyt_), a 16-year-old Joliet High School student from Chicago.

Because age is just a number.

“For me, it’s more of a joke than anything,” said Antonio Del Otero (@antoniodelotero), a 15-year-old Huron High School student from Detroit, Michigan. “However, I do respect and support Bernie Sanders very much because we stand for similar ideals. I think a huge percentage of his supporters are young and influential teenagers who tend to be ‘in with the times,’ if you will, and use words like Daddy to jokingly describe him. Also, I call Bernie Sanders Daddy because he know what he talking about, he sassy, and he fine AF.”

They are being controlled by a shapeshifting pizza demon named Nefarious who wants to pursue a romantic relationship with their label manager, Matt.

“I call Bernie Sanders Daddy because I am being controlled by a shapeshifting pizza demon named Nefarious who wants to pursue a romantic relationship with my label manager, Matt,” said Justin Andrew (@falsepanic), a 21-year-old University of Tennessee student from Knoxville, Tennessee.

“I think millennials really enjoy the terms “mom” and “dad” to express our favor in regard to a particular celebrity,” said Raquel Ochoa (@sadnpathetic), a 22-year-old gender studies major at UCLA. “Bernie is quickly becoming a social media sensation since he’s the most popular presidential candidate for us millennials. Bernie doesn’t have to try.

“He’s a born dad. Dad chic is effortless, it’s relatable, it’s laughable, but not in the way you’d think. People are pushing out positive memes about Bernie, what he’s promising, what we have to look forward to in a nation under Bernie. Meme culture is our culture right now, and he’s the one who is looked at favorably.”