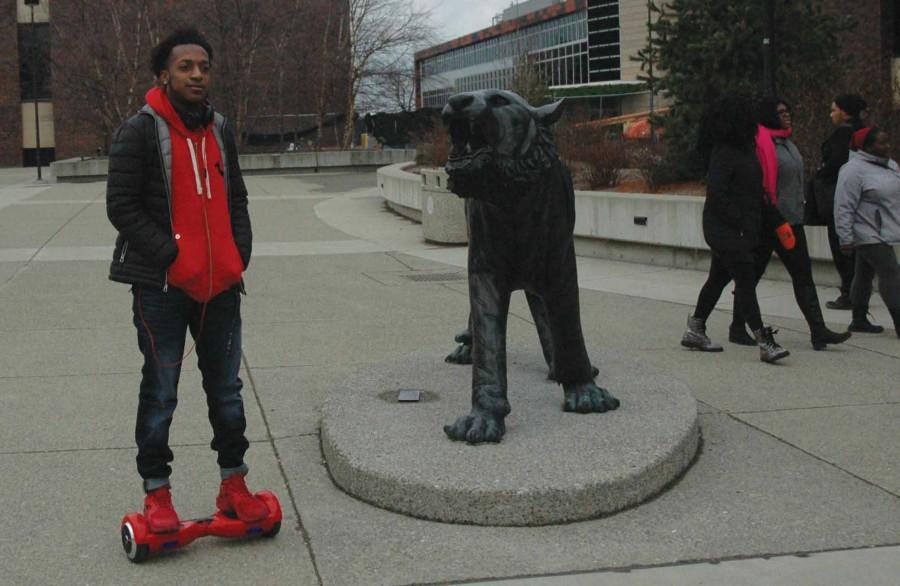 Freshman computer information systems major Michael Clark, Jr. has been riding his overboard for almost two months. Now, he cannot keep his overboard in his room in Perry Hall.

Concerns were raised after recent findings were reported that hoverboards can spontaneously combust, explode, and cause injury while charging or during use.

One report from a Fox 5 local news station in Maryland listed a hoverboard as the main cause of a house fire, stating, “Eleven-year-old Ryan has a new room and bed after firefighters say a hoverboard ignited without warning, destroying everything in its path. The souped-up scooter caught fire and zoomed under Ryan’s bed.”

There have not been any accidents or incidents from hoverboards reported on Buffalo State’s campus.

“The thought of a potential fire that it (hoverboards) could cause within the residence hall – especially within close quarters – and the other possible dangers on campus, were the driving factors in deciding to ban hoverboards,” Director of Residence Life Michael Heflin said.

An email was released to all Buffalo State students on Jan. 26, warning residents of the new policy.

“How we plan to enforce the policy is to have residents send them (hoverboards) home during the nearest break and if they don’t send them home, they will have to talk to their complex director and the college will store them (hoverboards) in a safe place,” Heflin said.

Hoverboards will now be treated like any other contraband material such as microwaves and flame-retardant curtains.

“If students choose not to comply then residence advisors will go into confiscating the device and citing them for a judicial community behavior infraction because they are ignoring the policy set by residence life and approved by student affairs,” Heflin said.

Buffalo State is not the first institution to ban hoverboards on campus. There is a growing list of colleges and businesses that have stopped allowing the device. Among the first to ban the device was the airline industry.

New York City has made riding hoverboards illegal. If someone were to get caught riding a hoverboard in the street, highway, parking lot or even sidewalk of the city, they could potentially face a fine of up to $200.

Amazon has announced it will send refunds to customers concerned with safety and advised them to throw the machine out if they think it’s unsafe.

“For consumers who purchased a hoverboard from Amazon, they can return the product right now for a full refund,” Chairman of the CPSC, Elliot Kaye said. “I want to commend Amazon for voluntarily stepping up, providing a free remedy and putting customer safety first. I encourage consumers to take advantage of Amazon’s offer and to contact the company through their website.”

Raheem Newton, a sophomore business administration major at Buffalo State, bought a hoverboard to help him get to class faster.

“It made my life easier,” Newton said. “If I was on one side of campus, I could get to the other side in two minutes. They go surprisingly fast, it was a convenience and saved me time.”

After the ban was implemented, Newton had to store his hoverboard off campus to abide by the policy.

“It’s disappointing that I can’t use my hoverboard or have it in my room,” Newton said. “Right now it’s too cold to use it but when it gets warmer I think more students will be upset about it. People will still find a way to ride it and now that they have to keep it hidden it could become more dangerous.”

Some students agree with Newton.

“I don’t feel like there should be a ban on hover boards because I paid my money on it, and who is the school to say it’s something I can’t use? I use it to get to class,” said Chanel Michelle, a senior social work major. “If you get it and abuse it, then it becomes a problem but the ban should not apply to the people that use it correctly.”

Other students, however, take a different stance.

“It’s the best thing that has happened to this campus. The toys are useless and dangerous,“ Roy Garcia, a psychology major freshman, said.

“I agree with the ban. I have seen all the recent stories on the news associated with the hoverboards and believe that even if no incident has occurred on campus that it is a smart idea to take precautionary measures to protect us from potential danger. However, I am not so sure that the rest of the student body will be as understanding,” Heidi Moncion, a junior fashion merchandising major said.

And some students are completely indifferent.

“It doesn’t affect me at all if people are on their hoverboards or not,” said Tiana Knight, a sophomore French major. They look annoying but they have not caused any real trouble.”

As of now, the ban only applies to residence halls, but the future for hoverboards on campus is unclear.

“Think of your fellow residents and the safety of your surrounding environment,” Heflin said. “We have been very fortunate to not have major accidents or fires in recent years. Now that the hoverboards are here, there is a potential for danger. Think about the impact that the potential danger could have on the entire campus, as well as an individual level. In order to ensure campus safety, the community must be mindful of their actions.”