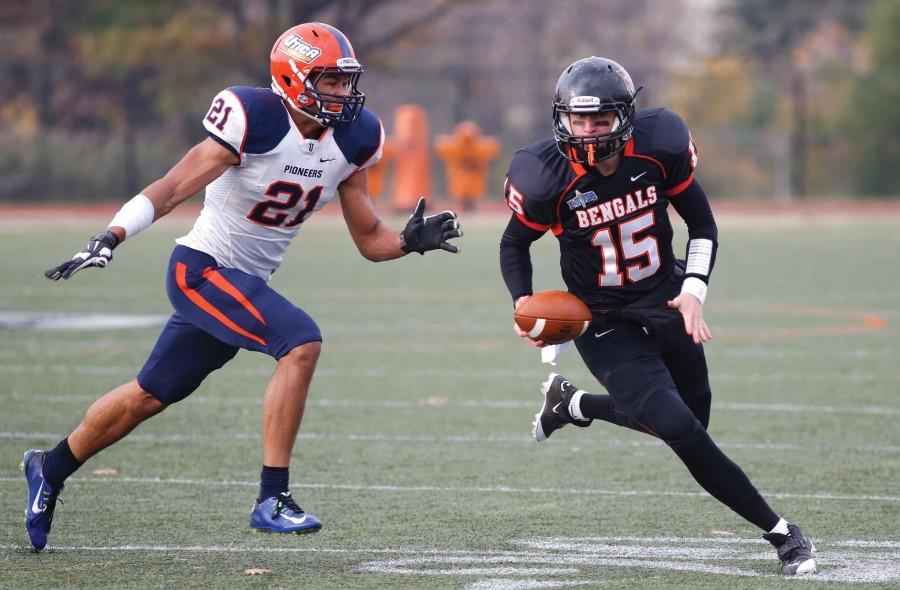 In a back-and-forth battle defensive battle for field position between Buffalo State and Ithaca, the Bengals finished on top, 7-3.

The first half was a battle for field position. Both teams’ punters accrued over 150 yards due to stout defense from both teams. Buffalo State quarterback Aaron Ertel threw five completions on 10 attempts and one interception, while Ithaca’s quarterback John D’Onofrio completed four of his 10 throws.

The biggest play of the first half was an 80-yard option play to Bengals running back Dale Stewart that scored a touchdown, but a holding penalty on the line of scrimmage negated the play.

The lone score of the first half was a 23-yard field goal by Ithaca’s kicker Max Rottenecker.

After an underwhelming first half offensively, Buffalo State Head Coach Jerry Boyes gave senior quarterback Dan Serignese the start in the second half. Serignese turned the passing game around in the second half, completing 9 of 12 attempts for 92 yards and a touchdown.

To start the second half, the Bengals were given a second chance after being stopped at the 50-yard line. An Ithaca defender who was attempting to block the punt ran into the punter, resulting in a Buffalo State first down. The next play, running back Tre Jones broke two tackles then fumbled the ball; Ithaca recovered.

The first touchdown of the game came early in the fourth quarter as Serignese capped off a long drive with an 11-yard throw to wide receiver Had Bryant to give the Bengals a 7-3 lead.

Two personal fouls against Buffalo State assisted Ithaca as they drove down the field, but on a fourth-and-goal at the 11-yard line, defensive back Ish Height intercepted the ball in the end zone.

On the first play of the ensuing drive, running back Dale Stewart fumbled the ball, giving Ithaca the ball right back on the 20-yard line, down 7-3 with only six minutes left to play.

Ithaca failed to score a touchdown after an overthrow by D’Onofrio on fourth-and-7. Buffalo State drove down the field and ran out the clock to secure the win.

The victory pushes Buffalo State’s record to 6-3 (4-3 E8). Next Saturday, Buffalo State hosts Brockport in the I-90 Bowl for its final game of the regular season.