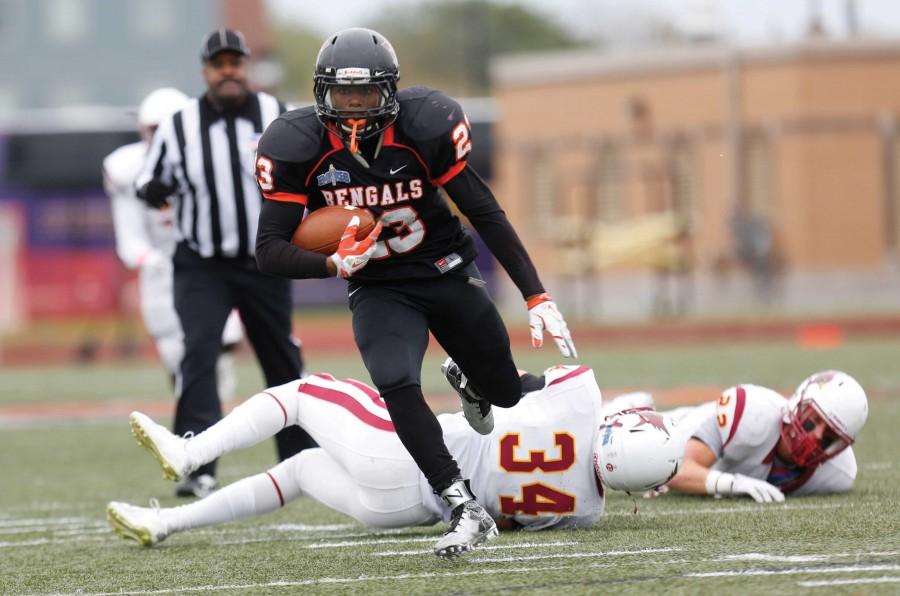 Junior running back Tre Jones rushed for 91 yards and two touchdowns against Hartwick.

Buffalo State jumped out to a 10-0 lead and allowed Hartwick just one rushing yard on Saturday, but the Hawks’ passing offense put up over 350 yards and scored four touchdowns, leading them past Buffalo State and the Bengals’ conference-leading scoring defense in a 41-30 conference contest at Wright Stadium.

It was a battle of a dynamic air attack versus a bruising ground game, as Buffalo State leads the Empire 8 in rushing, while Hartwick is the conference’s passing leader.

Coming into the game, Buffalo State was allowing just 15.7 points-per-game. Hartwick’s 41 points is the most the Bengals have given up in a game this season.

The win was Hartwick’s first conference victory of the season, but senior linebacker John Alessandra denied that Buffalo State overlooked the Hawks.

“In the conference that we’re in, we can beat any team and we can lose to any team,” Alessandra said. “We’re aware of that.”

Hartwick capitalized on two of three Buffalo State turnovers as Ricky Giraldo returned a 95-yard interception for a score on the first drive of the second quarter and a Buffalo State fumble late in the third quarter resulted in a 24-yard John Garcia to Tanner Williams touchdown pass two plays later.

The Bengals lead the Empire 8 with 1,678 rushing yards this season as Jones and Stewart are the conference’s third and fifth-leading rushers, respectively.

Junior quarterback Aaron Ertel completed 25 of 40 pass attempts for 290 yards, a touchdown and one interception.

Despite having the more balanced offensive attack and gaining more total yards (467-374), Buffalo State couldn’t keep up with Hartwick and the top two receivers in the conference, Brad Garcia and Tanner Williams. Both have over 1,000 receiving yards this season.

Both Garcia and Williams hauled in five catches against Buffalo State as Garcia gained 135 yards and scored twice while Williams posted 123 receiving yards and a touchdown.

On the first play of the game, senior defensive back Mitch Thomas intercepted Garcia on a deep attempt. Buffalo State capitalized on the turnover, marching down the field before stalling at the Hartwick 32. Junior kicker Marc Montana made the drive count, nailing a 49-yard field goal to open scoring.

The Bengals forced a three-and-out on the next drive, setting up the offense with great field position on their own 42. The offense took advantage once again, capping off a 7-play, 58-yard drive with a 29-yard Ertel-to-Evert touchdown pass, giving the Bengals a 10-0 lead.

On the next drive, Hartwick ran nearly six minutes off the clock before settling for a 23-yard field goal after 13 plays netted them 64 yards.

Five plays later, the Buffalo State offense was humming and knocking at Hartwick’s door once again before Ertel was intercepted by Giraldo, who returned the pick 95 yards to the house and tied the game at 10 early in the second quarter.

That huge defensive play proved to be a momentum shifter as Buffalo State failed to reclaim the lead for the remainder of the game.

“We made some mistakes; we lost the turnover battle and that had a huge impact on the game,” Ertel said. “Buff State beat Buff State.”

Buffalo State missed a field goal on the ensuing drive, then Hartwick drove down the field and scored on a 10-play drive finished off by an 18-yard Marcus Mistersaro touchdown catch.

The Hawks had their first lead at 17-10 with just over three minutes left in the first half. The teams exchanged fumbles and Buffalo State missed a 40-yard field goal to close out the first half of play.

The third quarter opened up with four straight punts, two from each team, before two scores occurred back-to-back.

Dale Stewart capped off a 9-play, 61-yard Buffalo State drive with a 9-yard rush. The extra point was blocked though, allowing Hartwick to keep a 17-16 lead.

The Hawks responded on the first play of the next drive as Garcia tossed a 65-yard bomb to Brad Garcia. Hartwick led 24-16 with a minute left in the third quarter.

On the ensuing drive, a Buffalo State fumble set up Hartwick in Bengal territory. Four plays later, Tanner Williams was in the end zone after reeling in a 24-yard pass. Hartwick extended its lead to 31-16 early in the fourth.

Hartwick scored on its next possession, capping off a 6-play, 59-yard drive with a 32-yard Garcia to Garcia strike. Hartwick led 38-16 with just over nine minutes left in the game.

Buffalo State pushed back, as 9 plays, 69 yards and just over four minutes later, Tre Jones was in the end zone after plowing 13 yards for a score. The scoreboard read 38-23 Hartwick with just under five minutes to play.

A bad punt sent Buffalo State up for one last final push on the Hartwick 41, and they took advantage, wasting little time and finding the end zone in two plays. A 22-yard Ertel run set up a 19-yard Jones score, which made it a one-possession game at 38-30 with three minutes to play.

An onside kick attempt failed miserably as Hartwick recovered and nearly returned it for a touchdown before Ish Height made a touchdown-saving tackle at the one-yard line. Buffalo State made an impressive goal line stand, but a Hartwick field goal put the game out of reach at 41-30 with about a minute left on the clock.

“If we win our next two games, we’ll be at 7-3, which is exactly where we were last year,” offensive coordinator Christian Ozolins said. “We were fortunate enough to get an ECAC bid because of that.

I’m hoping that, if we get these two wins, that maybe [the NCAA will] see the strong schedule that we play and give us an opportunity to play an 11th game. I think our young men deserve it.”