Bengals roll past Plattsburgh 4-1 in semis, will make first ever SUNYAC Championship appearance 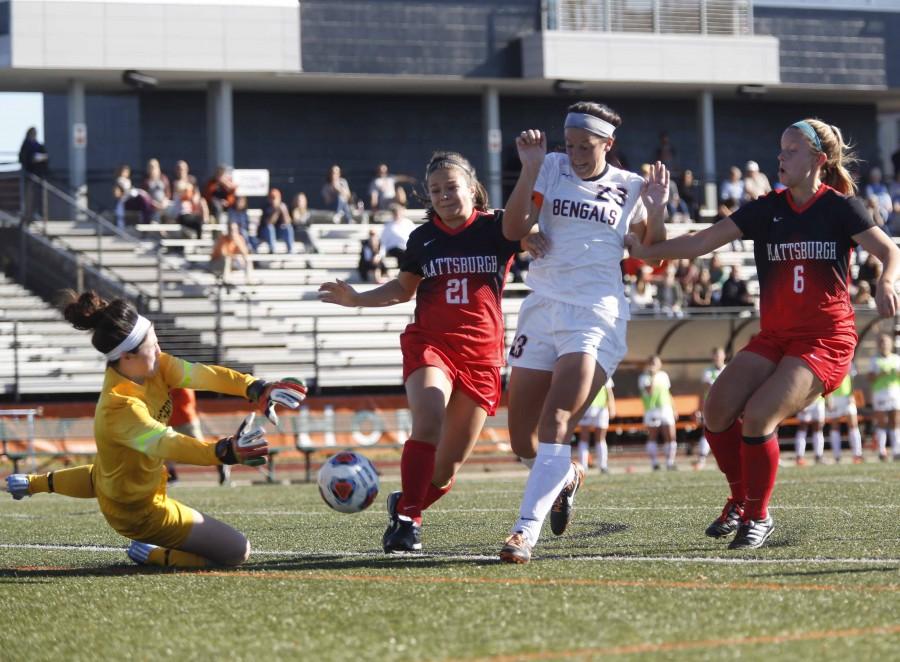 Meghan Allen (23) had a goal and an assist in Buffalo State’s 4-1 win over Plattsburgh.

The Buffalo State women’s soccer team cruised to a 4-1 win against Plattsburgh to advance to the SUNYAC Championship for the first time in program history.

The win was the first playoff victory in the history of the program as well.

The Bengals controlled the game throughout and outshot the Cardinals 26 to 5, with nine corner kicks to zero from Plattsburgh.

After a flip throw-in from midfielder Alexis Carillo trended on social media in the past few weeks, she followed up with another one that landed at the feet of midfielder Victoria Colotti who tapped the ball in to gain an early lead in the 10th minute.

In the 30th minute, Colotti was pulled down in the box and Buffalo state was awarded a penalty kick. Midfielder Melissa Smith, the Bengals’ leading scorer and newly minted SUNYAC offensive player of the year converted to make the score 2-0 at the half.

In the second half, Plattsburgh still had no answer for Buffalo State. Forward Meghan Allen was tackled from behind in the 50th minute and the Bengals were awarded another penalty kick.

Allen took the kick and converted to make the score 3-0, solidifying the win for the Bengals.

A few minutes later, Allen guided a leading pass to Smith who snuck the ball in the far corner to stretch the lead to 4-0.

Plattsburgh finally broke through in the 87th minute, but by that point the game was out of reach.

Earlier in the day, Oneonta defeated Oswego 2-1 in the other SUNYAC semifinal matchup.

The Bengals are seeking their first ever SUNYAC title and will take on Oneonta on Saturday at Coyer Field.