Lifelong bond fostered beyond the pitch 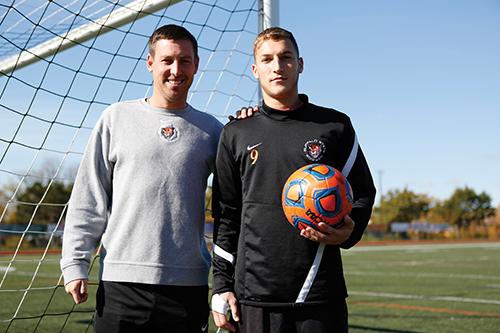 “Well, when I first told Howlett I wanted to come to Buffalo State, he kind of didn’t believe me,” Pavone said. “He said, ‘Oh, coming from UMASS to Buff State?’ But he understood I really wanted to play for him.”

THE MAN BEHIND THE CLIPBOARD

Howlett is originally from Portsmouth, England. His path after high school was far from typical.

“We finish school at 16 in England,” Howlett said. “After that I was with AFC Bournemouth, who is now in the Premier League. I played in the reserves, I played in first-team games. It was amazing.

“My days looked like I lived in a penthouse suite overlooking Bournemouth Beach. It was a great experience, a fantastic time of my life, but at the end of it, it just felt empty.”

The young English soccer player was competing daily for a spot on the team. The struggle to get playing time required hard, aggressive play.

Howlett was cut from the team.

Instead of continuing to pursue his soccer career, he decided to go to college. Roberts Wesleyan College, of Rochester, NY, gave him a second chance.

“I had a couple of friends that came over here,” he said. “[They] were very successful and just loved the lifestyle. I decided on taking the opportunity to come out here and start something new.”

Howlett had an easy transition, but played a different role in college. He started as a defender in England and switched to forward as an American player.

“I think at Judson [University in Chicago] I scored something like 42 goals in 38 games,” Howlett said.

Once the fall semester ended, Howlett didn’t want to go back to Portsmouth. He wanted to stay in the area to coach, and to continue the relationship with his then-girlfriend and current wife over the summer.

The assistant coach of the Roberts Wesleyan College men’s soccer team, Marty Pavone, had recently housed a foreign soccer player on the team from South Africa. Howlett picked up his phone, asked if he could stay there, and Pavone responded with a welcoming “yes.”

“The next day he was there with his pickup truck, picking me up and moving me in,” Howlett said.

Howlett didn’t hesitate to ask the Pavones if they would take him in.

“[They were] very open, very family-oriented, so they made me feel very comfortable,” Howlett said.

The household consisted of parents Marty and Emily and their two sons – Luke and Alex.

“I would come home and I would play basketball in the driveway. I am terrible at basketball,” Howlett said, laughing. “I would put the hoop at where I could dunk the ball and they couldn’t, so I would always win, which would be funny because, Luke, he is very competitive. He never liked that.”

The Pavone boys and Mark created a strong bond. Even when Mark transferred to Judson University, he would come back to Rochester during breaks.

“They were my parents too,” Howlett said of Marty and Emily. “I remember messing up in school, more so in soccer, and Marty would tell me straight, I needed to be more respectful or I needed to act differently. I wasn’t just living there, but making sure I lived by the rules as well and it really helped me mature.”

As Howlett grew up, so did Luke, who was starting to have aspirations of playing Division I soccer.

In high school, Luke excelled in soccer. With the assistance of strong family support, Luke grew into his own and began his college recruitment as early as sophomore year.

“By the time he was a freshman in high school, he really started to show a lot of skill,” his mother, Emily, said. “He was small at the time, and they still put him up a couple levels in high school.”

Marty died during Luke’s senior year of high school. Luke’s dream was not only his, but his father’s as well. Luke was drawing interest from many different programs and credited his father’s guidance and involvement for his success on the soccer field.

“My dad was my coach when I was younger,” Luke said, “so it was always a dream of ours to play D-1. So when I was recruited [by UMASS] and the coach told me I had a spot on the team, I took it and ran with it.”

At the University of Massachusetts Amherst, Luke wasn’t meeting expectations, nor was the team.

During his freshman season, the Minutemen finished with an unimpressive record of 4-14-1. Luke didn’t score a goal in the 12 games he played in and his season was cut short due to a meniscus tear.

UMASS head coach Sam Koch died while fighting sinus cancer the offseason between Luke’s freshman and sophomore years. Koch coached the team for 24 years and was a big part of Luke’s recruitment.

Under O’Neill, the Minutemen had similar results, ending the season with a record of 3-14-1.

Howlett coached at SUNY Canton before coming to Buffalo State in 2013, and Luke began to consider reuniting with Howlett. But the decision of going from Division I to Division III is not one to make overnight.

“[I was] just shocked really,” Howlett said. “He is one of those who’s always been very emotional and acted on emotion at times. I wanted to make sure he was right in what he wanted.”

Luke’s decision wasn’t based solely on his team’s lack of success, but where he felt he had the best chance to better himself as a player.

“That’s the main reason I came here, because Howlett used to play professionally in England and he still has the connections,” Luke said.

At Buffalo State, Luke came into his own. Luke scored 11 goals in his first season as a Bengal and helped lead the team to a playoff berth.

“A lot of people, don’t hate on it, but they knock me for going D-I to D-III,” Luke said. “I’ve got nothing against this program; I love it equally, if not more than I did at a Division One program.”

The relationship between Howlett and Luke strengthened at Buffalo State as they led the team to their third 10-win season in the last 30 years.

“He’s like a brother to me, so it’s real nice to share this experience with him,” Luke said. “When my dad passed away when I was 18, he kind of filled in that role as my dad, almost. It’s a pleasure being here with him.”

Howlett never recruited Luke out of high school. He thought the added pressure was unneeded.

“I didn’t want Luke thinking if he didn’t choose to come and play for me, then it may affect the relationship,” he said.

The transition was difficult at first, as Luke had to first accept Howlett’s new role as his soccer coach.

“It was hard to get used to him being a coach, and leaving the whole brother thing behind,” Luke said, “but we work well together. It’s almost a professional environment here.”

Howlett didn’t want the team to feel that Luke was being favorited in any way, and remained quiet about his and Luke’s history.

“It’s weird, because I wondered how the relationship would be with coaching Luke,” Howlett said. “For me, I treat all of the guys the same. If one of them messes up, they would all get the same treatment.”

Luke was named a team captain, for no reason other than he proved his leadership and ability in the locker room.

“It was never in my mind to name him captain just because he came here,” Howlett said. “They saw his work ethic. I think you always need one of those captains that people are going to follow and push themselves to get to that level.”

The Bengals finished ninth out of ten teams last year. The strong turnaround this year – finishing sixth and making playoffs – surprised some, but not all.

“We kind of like being the underdogs,” Luke said. “Not a lot of people believe in us. When I first came here, I told people this program is going to be good and they kind of giggled or laughed. It’s nice to prove people wrong and the guys worked real hard to do so.”

The bond between Howlett and Luke goes beyond the 2015 Buffalo State men’s soccer season. It goes back to the days when Mark woke up for classes in the morning and sat next to Luke watching SpongeBob. For Luke, coming to Buffalo State felt a lot like returning home.