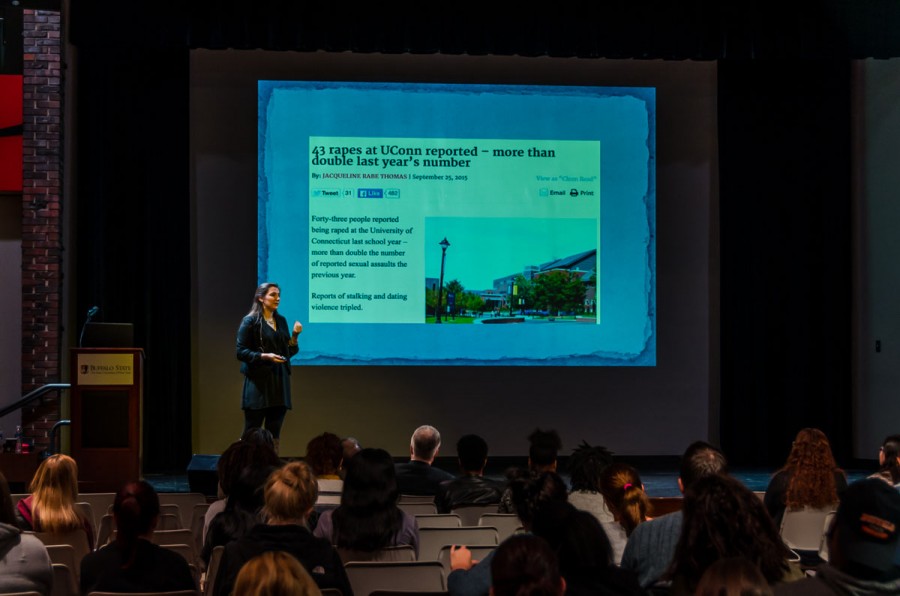 Kylie Angell spoke to SUNY Buffalo State students on Oct. 20 about sexual assault and its repercussions in the Student Union Social Hall.

SUNY Buffalo State hosted a guest speaker to discuss sexual awareness in the Social Hall inside of the Campbell Student Union on Oct. 20 from 6-7:30 p.m.

Kylie Angell was a former student of the University of Connecticut. While in college, Angell was sexually assaulted by a friend in her dorm room. After going to the authorities, her assaulter was only suspended from the campus for a couple weeks in which he would later return and graduate with Angell.

As the presentation started, several speakers came on to introduce Angell, one of them being Buffalo State Diversity Program Coordinator Jason Parker.

“We need issues like this to be completely eradicated,” Parker said. “We are very gracious to have Kylie speak to us about this issue, and hopefully her words can inspire you all to make a difference.”

As Angell took the stage, she quickly started a video to help the audience understand her message. She put on the music video “Til It Happens To You” by Lady GaGa. The video portrays several different girls being sexually assaulted and the effect it has on their lives.

Angell then told the audience how the police officer involved with her case stated:

“Women need to stop spreading their legs like peanut butter or rape is going to keep on happening until the cows come home.”

This shocked the audience. Angell finally stated that, “after some time I decided to have a voice of my own.”

Angell became an activist. Joining protests such as the “Slutwalk,” and several other protests, in order for her voice to be heard. As the program came to an end, questions emerged.

When asked “How long did it take until people finally listened and accepted you?” Angell responded:

“Honestly, the first couple months were rough because the authorities just weren’t listening to me. However, after sometime, people began to listen to me and I started to realize who my true friends were.”

Buffalo State student Shelonda Chestnut was asked how she felt about the presentation.

“I thought it was very inspiring and useful for us to know,” Chestnut said. “We all need to be aware of major issues in our country.”

Angell stayed after her presentation for pictures.