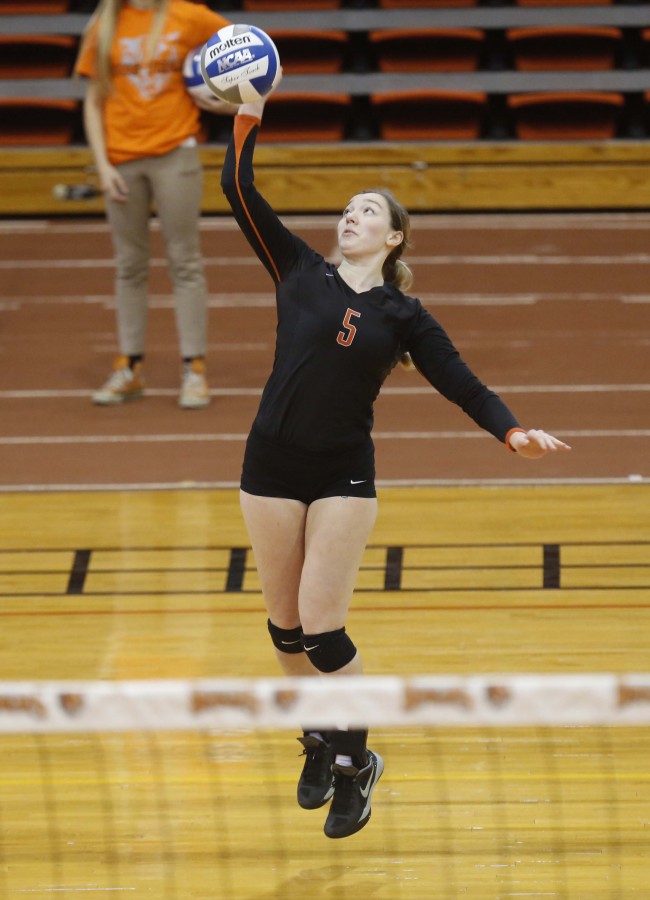 Senior Rachelle Kelchlin leads the Bengals with 329 digs this season.

As the SUNYAC playoffs approach, the Buffalo State women’s volleyball team is in the thick of a tightly contested playoff race.

The Bengals found a way to come out on top in several close sets and defeated Plattsburgh, 3-2 on Friday before two rough Saturday outings saw them lose 0-3 and 1-3 to Oswego and New Paltz respectively.

The Bengals began their playoff push on Friday against Plattsburgh, taking a five-set match. Plattsburgh took the first and fourth set, but Buffalo State pulled away in the fifth, topping the Cardinals 15-8.

Buffalo State put itself in a good position heading into Saturday’s matches with a 10-8 record before two losses set them back and put them at an even .500.

The Bengals had their work cut out for them on Saturday, going against an Oswego State team that came in at 16-6. Oswego took the match in three sets as the Bengals continued to struggle to close.

Rachelle Kelchlin and Britt Hallett-Johnathan combined for 29 digs, but Oswego proved to be the stronger team.

Against the New Paltz Hawks, who were undefeated in SUNYAC play heading into Saturday, Buffalo State put up a stronger fight, but still fell in four sets. Two of the three lost sets were by a margin of four points or less.

Head coach Maria DePeters knows that the team has to close out close games if they’re to make the postseason.

“I’m not happy with our record, it’s unfortunate that the postseason is on the line,” DePeters said. “We’re not consistent enough to win the tough games, and we have to figure it out in the next two weeks.”

The Bengals currently sit at seventh in the SUNYAC standings with a 10-10 record (2-4 SUNYAC).

“Right now, we’re really fighting for a spot in the top six,” senior Jennifer Cecchettini said. “There is no question that we have to come out of the next SUNYAC weekend at 3-0.”

In the SUNYAC playoff bracket, six teams make the postseason with the top two seeds getting a bye week. The Bengals still have ten matches to play, including three all-important SUNYAC contests.

At 2-4 in SUNYAC play, the Bengals are tied with Fredonia and are one game behind Cortland. However, both teams have a better overall record than Buffalo State.

“We’ve set ourselves up for a long road ahead that includes a lot of hard work,” assistant coach Leanne Maloney said. “Our next focus is watching a lot of film and working on specific skills. Whoever shows up to play and has consistency will make it to the playoffs.”