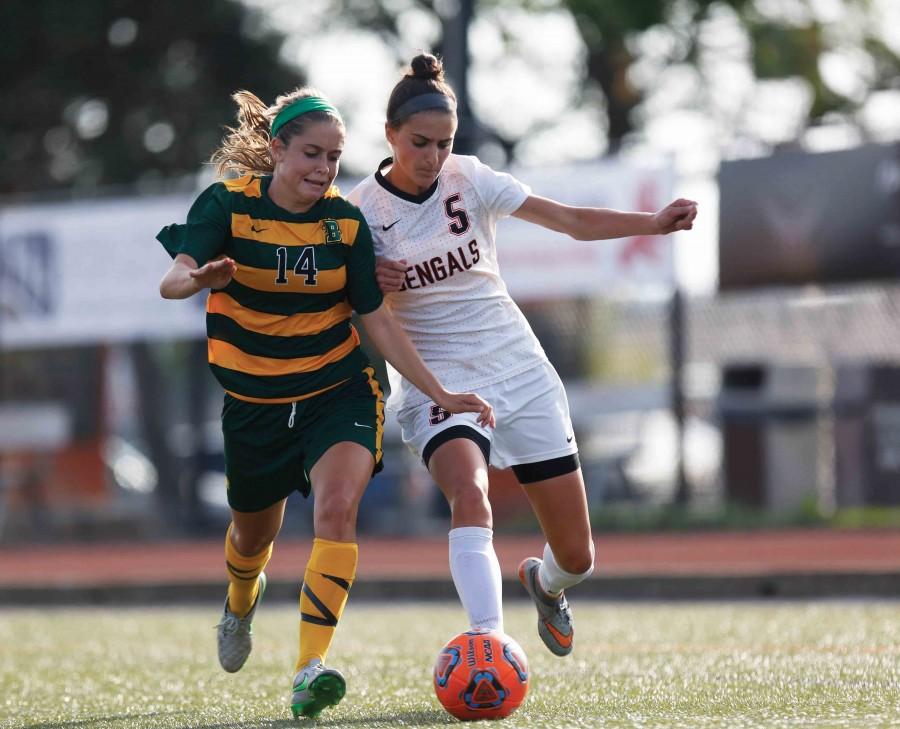 Junior midfielder Kristin Seiferth and the Bengals have gone five straight without a loss.

313 minutes and 51 seconds of game play without conceding a goal and timely goals from key players has the Buffalo State women’s soccer team on a five-game win streak and off to their first 2-0 start in SUNYAC play since 2010.

On Friday, the Bengals pulled away in a 2-0 victory against Brockport. In the early stages of the game, the Eagles threatened in the 8th minute with a shot off a corner that deflected off of the leg of midfielder Christina Leonardo.

Buffalo State responded in the 15th minute when forward Meg Allen knocked the ball in the bottom corner of the net after a mad scramble in the box. As has been typical for the Bengals this season, they controlled the tempo of the game with solid time of possession throughout.

“I think we’ve stepped up our game since we entered SUNYACs because we knew we were going to have tougher competition,” forward Melissa Smith said.

Brockport made a critical error in the 50th minute when midfielder and team captain Elizabeth Wilson was given a straight red card and was sent off for impeding Meg Allen on a breakaway chance at the net.

Buffalo State took advantage of the man advantage and Smith solidified the win with a goal in the 76th minute. The Bengals finished with 21 shots to the Eagles’ 9.

DeMarsh said that “organization, communication and a nice personality with some stubbornness we’ve developed,” has led to the team’s success.

Once again, the Bengals allowed the opponents an early opportunity to score when a shot by midfielder Emily Green struck the crossbar in the 6th minute.

Defender Gabrianna Boldinski tallied her first goal of the season on a header that she knocked in the net from a corner kick by Smith in the 12th minute. For her efforts on the defensive end, Boldinksi was given SUNYAC Women’s Soccer Defensive Player of the Week honors.

The rest of the game was tightly contested with the shot totals being nearly the same with a slight 9 to 6 Buffalo State advantage.

The 1-0 score stayed the same throughout the game with Geneseo trying to equalize until the very last minutes when a blocked shot sealed the Buffalo State victory.

For the rest of the season, conditioning and managing energy on short weeks will be key for the Bengals.

“Not expending all of our energy in one game will be really important going forward,” assistant coach Francisco Cardillo said. “For another Friday, Saturday week it will be important to try to save energy for both games.”

Following a pair of wins at home, the Bengals will now go on a four-game road trip.

“I kind of prefer away games because I sometimes like being the underdog and fighting against the crowd and the opposition,” DeMarsh said.

The road trip starts with a 1 p.m. matchup with “Battle by the Lake” rivals Fredonia on Saturday, followed by a non-conference tilt with Allegheny on Tuesday at 4 p.m.

“One game at a time,” DeMarsh said. “It doesn’t matter how you start, it matters how you finish. SUNYAC is the most competitive conference in the country and if we prepare, play our game and do the best we can, we can get the result we want after every game.”