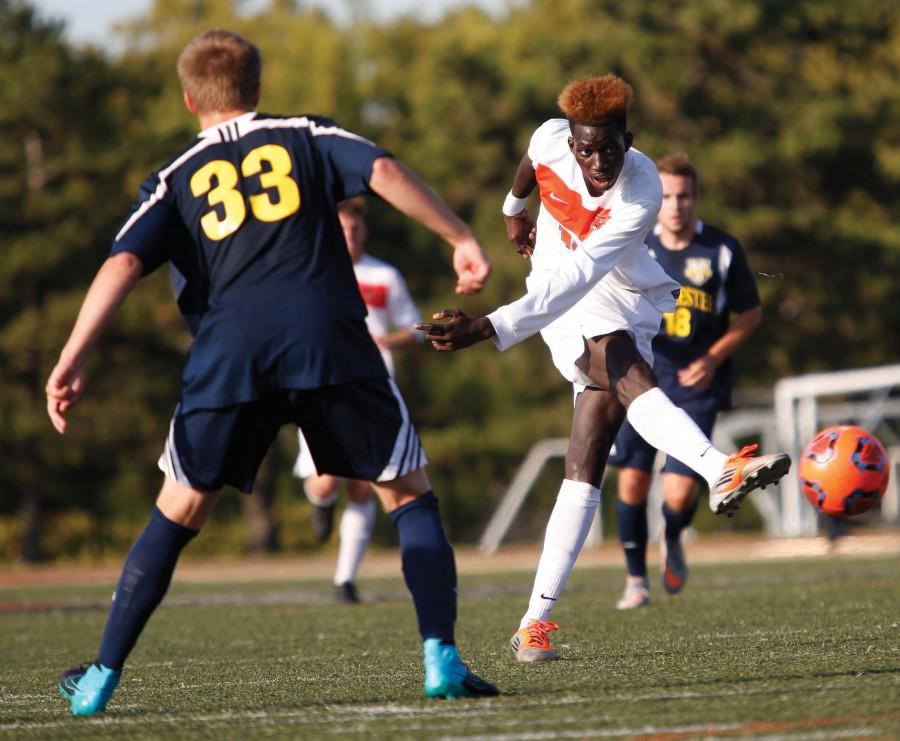 Even though their undefeated streak came to an end, Buffalo State men’s soccer (5-2-1) looks to be trending in the right direction as they enter their SUNYAC opening slate.

The Bengals lost their first game against the University of Rochester at home, 1-0. The lone goal of the game was an own-goal in the 81st minute of play.

Buffalo State recouped against Clarkson this past Friday with a 2-1 win. The Bengals’ leading goal scorer, freshman Bass Sarr, hit the back of the net on his fourth goal of the season and freshman August Finn added a second to secure the win.

Buffalo State capped their weekend with another 1-0 loss to No.8 St. Lawrence.

Head coach Mark Howlett saw a lot of positives in the play this weekend despite the fact that his team went 1-2.

“We beat a very tough team in Clarkson, and Plattsburgh is the only team in our conference to be able to do that, which was in overtime,” Howlett noted. “Then we lost 1-0 to the number eight team in the country, so it was a great weekend.”

The Bengals were fighting to stay undefeated when the Yellowjackets ended their streak.

“I say there was a little relief, but like I said we have been working real hard,” junior captain Luke Pavone said. “Being undefeated was nice, but yeah there was definitely a relief that we got the loss out of the way to U. of R. Hopefully we can get on the winning track and get a good seed this year going into the SUNYACs.”

Junior goaltender William Banahene has three shutouts on the season and feels relieved that their first loss is out of the way.

“I feel like the pressure is off,” Banahene said. “Now it’s the second season going into the SUNYACS.”

Through eight games this season, Buffalo State has only allowed four goals and has not allowed more than one goal in a game. Banahene credits his defense.

“Yeah, it makes me feel good,” Banahene said of the defensive success. “But it’s, I think, a team aspect. I am the one who gets the credit for it, but it’s all the team.

“You look and see I made the saves, but you don’t know how challenging the saves were and that’s credit to the defense and the midfield. It’s the whole team that’s doing it.”

“We are very well prepared,” Howlett said. “We probably played the toughest schedule that Buffalo State has played in probably 10 years. Trying to be the best, you have to play the best, and I think we have done that.

“So I think the conference we have to face won’t be much tougher than what we faced in non-conference [play] so far.”