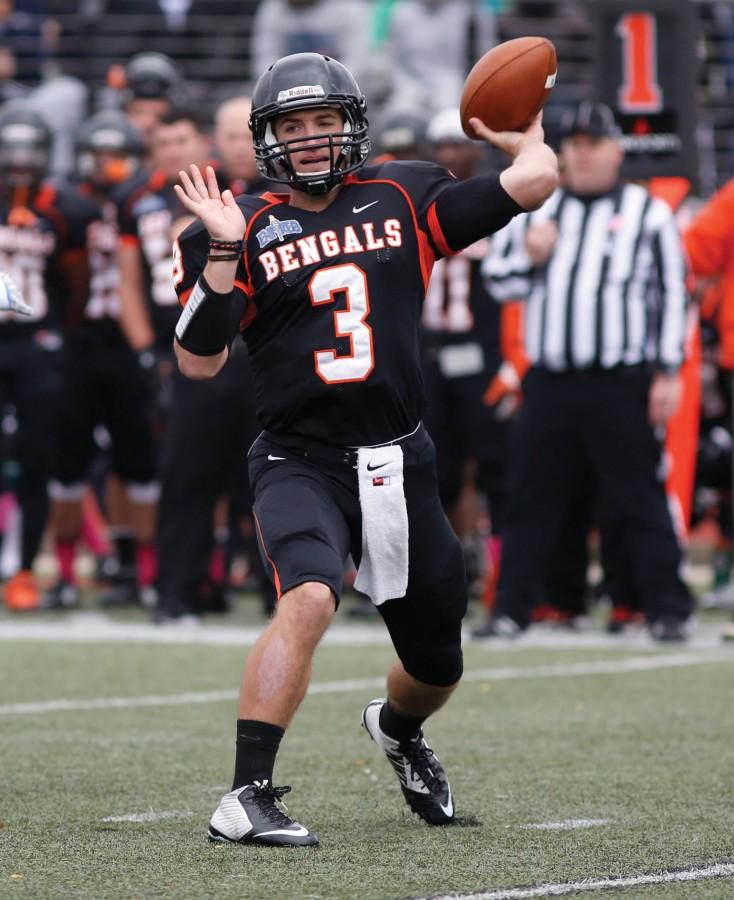 Kyle Hoppy was 14 of 19 for 197 yards and two touchdowns against Alfred before exiting the game with a knee injury.

In a hard-fought contest between two well-rounded football teams, turnovers, as they often are, were the deciding factor in a 29-26 Buffalo State loss to Alfred University on Saturday.

Buffalo State was well-rested and ready after enjoying an early second-week bye, but in a game with four lead changes, a late Buffalo State fumble proved to bury the Bengals, giving them their fourth straight loss to the Saxons.

“Buffalo State was its own worst enemy,” head coach Jerry Boyes told Buffalo State Athletics, “We made three turnovers at critical times, and just could not make enough plays to overcome the mistakes.”

Buffalo State held a 26-14 lead heading into the fourth quarter, but Alfred rallied back with two fourth-quarter touchdowns to take the three-point victory in both teams’ SUNYAC opener.

The Bengals fumbled three times, two of which were the result of missed connections on the pitch on speed option run plays. Despite practicing the play all throughout the bye week, running back Tre Jones said the Bengals “didn’t have it down pat,” and it cost them.

Starting quarterback Kyle Hoppy suffered a knee injury in the fourth quarter and did not return. He finished the day 14-of-19 for 197 yards and two touchdowns, and added 54 yards on 11 carries. Dan Serignese was 1-of-5 for 10 yards in Hoppy’s relief.

The Bengals have opted for a more run-heavy offense this season through the first two games, and opposing defenses have had no luck stopping the ground attack as Buffalo State backs have averaged 8.8 yards-per-carry on 56 runs.

“When you’ve got the running backs that we’ve got here, and the line up front, it’s a really good thing to have, especially when you’re getting so many yards per carry,” Hoppy said. “Especially when the defense knows we’re going to run it, and we still run it and get positive yards, it just shows how strong we are up front and how good our backs are.”

Madison Wesolowski was the Bengals’ leading receiver, hauling in four catches and accounting for 77 of Buffalo State’s 207 passing yards.

The Bengals shanked a punt on their opening drive, then Alfred went 68 yards on 10 plays to take the first lead with 7:22 left in the first quarter, capping off the drive with a one-yard Maleke Fuentes run.

Alfred retook the lead late in the second quarter, 14-13, after a 5-play, 77-yard drive was finished off by a 9-yard pass to wideout Brendan Buisch, to give the Saxons a one-point lead heading into halftime.

Buffalo State scored the first two touchdowns of the second half to reclaim the lead, 26-14, on Tre Jones’ second touchdown of the day – an 11-yard rush – and an 18-yard pass to another tight end, Edwin Young. Buffalo State attempted an unsuccessful two-point conversion after the Tre Jones score.

The fourth quarter belonged to Alfred as Buisch scored his second of the day on a 20-yard pass and Johnson scrambled into the end zone on a 3-yard rush to give the Saxons a 29-26 lead with just over five minutes to play which they would not relinquish.

Buffalo State fumbled late in the fourth quarter; Alfred recovered at the Bengals’ 48-yard line and went three-and-out after failing to convert a 4th-and-1. The Bengals were given one last shot from their own 39 with 2:12 to play, but came up short on a 4th-and-13 when Serignese hit receiver Justin Medley for 10 yards.

“It’s always a very close game with them,” Hoppy said of Alfred U. “It’s always back-and-forth. It’s always kind of a classic game between us. It’s always close and there’s always some crazy stuff happening; that’s the recipe for a rivalry.”

Hoppy has not been able to walk after injuring his knee and awaits MRI results that will come in on Thursday or Friday. If he can’t go, backup Serignese has the experience to step in and be successful, and has shown the ability to do just that in the past.

Serignese led the Bengals to a 38-27 win over Ithaca in week six of last season, going 9-of-14 for 155 yards and three touchdowns, and kept the Bengals in a 35-25 game against top-ranked St. John Fisher College.

Buffalo State will play their third straight road game to open the season against Morrisville State (1-1) on Saturday in Morrisville, NY. Despite not playing the first home game until a month after the start of the season, the Bengals feel they’re at no disadvantage when playing away from home.

“When we’re away, we have a better chance of winning,” Jones explained. “On the Friday before the game, we’re all together and we’re all focused on the game.”

Buffalo State isn’t taking the loss lightly and looks to get back on track this Saturday.

“We have a chip on our shoulder,” linebacker John Alessandra said. “I believe it’s really important to make mistakes to become a great team. I’m happy to get the mistakes out of the way after our second game, so hopefully we learn from those mistakes and come to play on Saturday.”