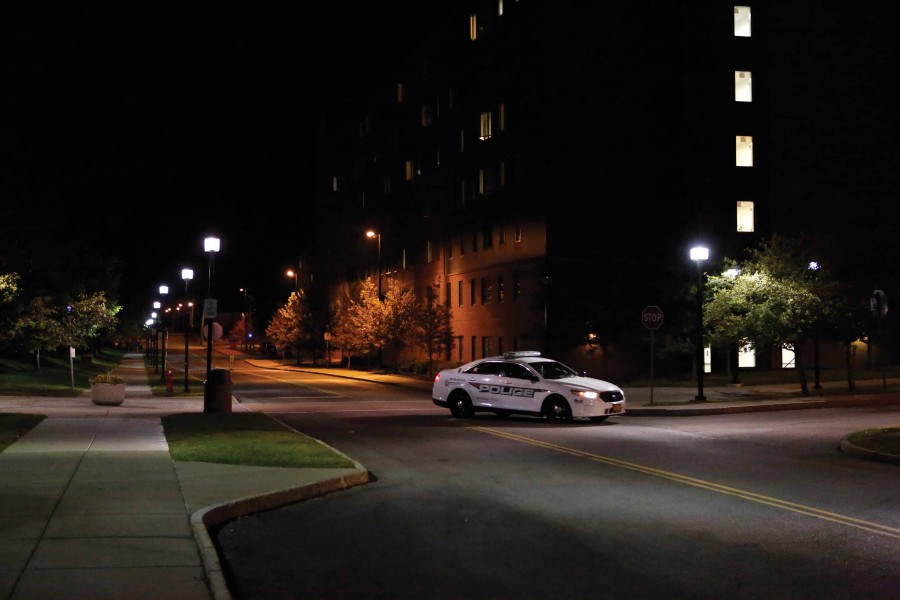 SUNY Buffalo State had its third serious crime on campus since the beginning of the semester occur Sunday night in Tower 3 residence hall at about 8:10 p.m.

A Buffalo State student was the victim of an armed robbery that happened in the stairwell of Tower 3, between the eighth and ninth floor. Two males are suspected of the robbery, one armed with a semi-automatic pistol and the other carrying a knife.

Four students were victimized, with one student being robbed of his cell phone and $20 cash. None of the students were injured and no other property was taken.

This is the third serious crime to occur on campus in the past three weeks. Last week, a stabbing occurred in the Student Apartment Complex. Two weeks ago, there was a sexual assault reported in Porter Hall.

Freshman theater major and Neumann Hall resident, Kayla, who didn’t want to provide her last name, said, “I mean I guess with the whole safety issue, now I feel safe to a certain extent because in Neumann, for some reason, I always feel safe in there, especially since now there’s always University Police walking around. But sometimes, it is kind of scary to walk outside at night and then not know what’s going to happen to you, especially in certain situations where things that happen, like on Rees and stuff like that. I was there probably like two hours before it happened, so it could’ve been me.”

“I am very uneasy about it. I’m not completely frightened, but I’m very uneasy. I just hope it stops. I mean, I really like this school and stuff like this that’s been happening isn’t very good for Buffalo State’s publicity.”

“It’s not like it’s getting safer every time, because every week it’s getting worse,” freshman engineering major and Cassety Hall resident Fares Abilmona said. “It started off with sexual assault. From the first day, I remember having orientation about sexual assault and then alcohol, and that night, that’s when it happened. And then the next week there was a stabbing. And now the third week, this [past] weekend, there was a pistol that’s been used and all of that. So I don’t think it’s getting any better, it’s just getting worse.”

“You come here, your parents send you here to a safe area so you can learn and all that, not to come to a dangerous area where they have to keep on being scared about you, worried about you and all that,” Abilmona said.

University Police sent out alerts Sunday night wherever they could, through emergency text messages, emails to students, faculty and staff, Facebook, Twitter and the Buffalo State website.

“No, we haven’t gotten any tips from our tip line at this point,” University Police Chief Carey said. “We’ve re-interviewed the victims and we’re coming up with composite sketches and we’re looking through different video we have on campus and in the residence halls to try to find the people or even our victims, and to create a timeline.”

While the robbery occurred around 8:10 p.m., Buffalo State students are required to present their IDs from 7 p.m. to midnight to RAs if they want to enter a residence hall. In this case, the robbers would had to have been in the building before 7 p.m., snuck in through another entrance, or somehow entered through the main entrance while an RA was not at their desk.

Janelle A. Brooks, assistant director at the residence life office, confirmed this via an email to The Record.

“Regarding entry to the Residence Halls, students have always been required to show ID when entering the halls during RA desk hours, which run from 7 p.m.-12 midnight. This is not something that was just created,” she wrote.

Carey said that RAs are supposed to check student IDs during RA desk hours. While it’s not known whether or not the suspects signed in, UPD is currently reviewing video footage.

“They’re supposed to, yes,” Carey said. “And that’s one of the things that we’re investigating is not only how did the persons get into the building, but if they were not signed in, why weren’t they signed in? And so, that’s part of what residence life is looking into as well, and how we can work with them to optimize security procedures.”

There are no clues as to whether or not the robbers are Buffalo State students.

“We have no idea at this point,” Carey said. “There’s no indication that they are students, and it’s not to the point where I would say that they’re off-campus persons. So right now we just have two males and we don’t have any information clearly to lead us towards their affiliation or non-affiliation with Buffalo State.”

“One of those is probably that the entrance to the residence halls, while they are locked and have fob access, we’re trying to have students realize that they shouldn’t let other people in, particularly that they don’t know,” Carey said.

“We’re trying to reaffirm and reinforce that procedure, and while it may not be polite, it is a major consideration into limiting access into the residence halls.”

Carey said UPD is open to suggestions and working with other segments of the campus community to better serve and protect Buffalo State students.

“I don’t think there’s any one thing that can be done. UPD has a lot of responsibilities and a lot of patrolling, and part of making the campus safe is that it is a campus-wide responsibility,” Carey said.

“Finally, I would like to commend our students for the resiliency, maturity, and care that they have displayed this semester. The actions of a few should not overshadow the good of the whole. Fellow students have been quick to call authorities for assistance, care for the victims of these appalling crimes, and step up to aid University Police in the investigations. This is your campus. If we continue to work together, I am confident that we will keep each other safe.”

“They do [patrol] and they do a good job of doing that,” Covington said. “But I think this is just crazy, like I don’t know what else they could do unless they’re just in the building 24/7. But if that’s what it comes down to, that’s what it’s going to have to come down to being safe.”

“I think that the school should definitely invest in making the campus a closed campus with more security,” senior history major Anadarlin DeJesus said. “And so that way, every time somebody enters the campus, they would get ID’d, so you’d know who’s coming in and who’s going out, so that way everything would be easier.”

“I think that, over time, that would have to come from receiving more funds in order to get people to work here, to become security guards who work in the entrances of the campus,” DeJesus said. “I mean, it’s a big campus, but just in order to be safe, that’s something they should take into consideration.”

At the United Students Government meeting on Sept. 15, Carey spoke briefly, announcing a “town hall” meeting with himself, Conway-Turner, and other board members, scheduled for next week.

During the USG meeting, Carey said that although UPD would like more officers, they “are appropriately staffed to handle all problems” and that “response time for incidents are about 1:34 and a lot closer to a minute for emergencies.”

The meeting date has yet to be announced.

The email alert sent out Sunday night to students, faculty, and staff describes the appearance of the suspects:

“The suspects are described as:

Suspect No. 1, a black male, wearing jeans, tan Timberland boots, a buzz cut haircut with SWOOP shaved into his head. He displayed a semi-automatic pistol.

Suspect No. 2, a black male, wearing sweatpants, black boots, and a black hoody. He displayed a knife.”