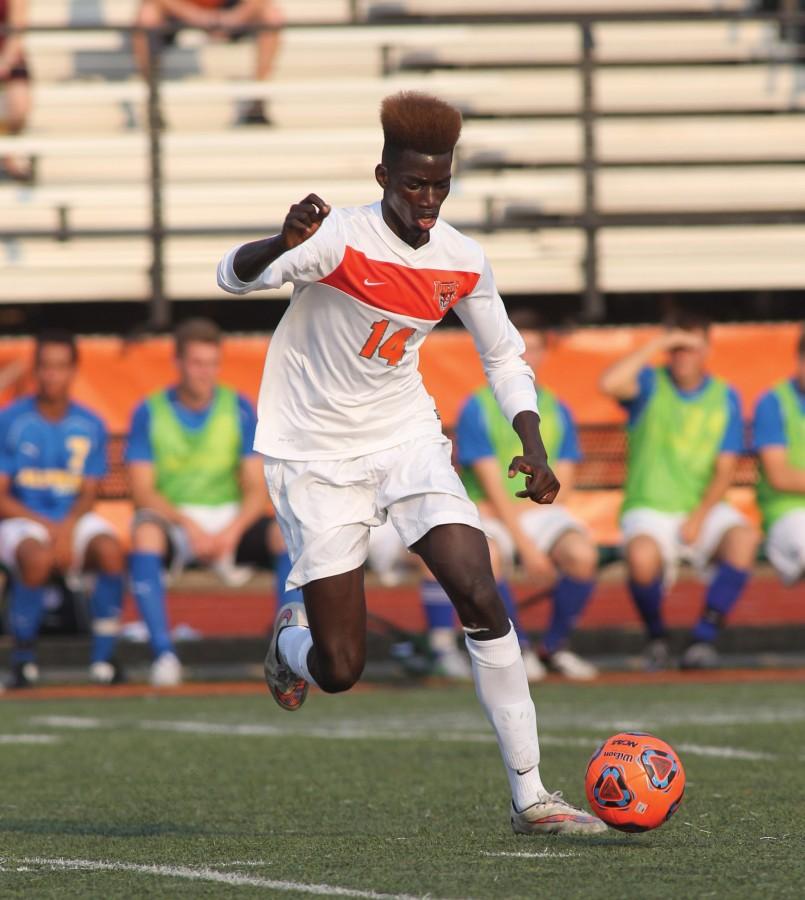 The Bengals faced Alfred State, Nazareth and RIT this past week, and won 2-0, 3-0 and 2-1, respectively.

“We came out to win the game and keep a clean sheet,” said head coach Mark Howlett about Tuesday’s home-opener versus Alfred State, “and that’s what we have done. We limited them to zero chances on goal and we had a lot of shots on goal.”

Not only did the Bengals limit Alfred State’s chances, but outshot them by a margin of 27-3.

Emotions affected the Bengals early on. In the 9th minute, junior captain Luke Pavone was pivoting around a defensive player just outside of the box when a defensive player grabbed his shoulder and pulled him back. The team, the crowd and even the goalie for Buffalo State, junior William Banahene, expressed their opposition to the non-call vocally.

“It can’t happen,” Howlett said. “We can’t have our leaders doing that. We will be talking to all of them about that because games get out of hand. I feel that the refs need to play their part in the game as well, but we can’t have everybody in the game get distracted.”

Freshman Bass Sarr scored his first two collegiate goals in his first game, scoring the first in the 14th minute and the second in the 36th.

Howlett has been impressed by Sarr’s quick transition to collegiate soccer and maturity.

“He has adapted to the college game quickly.” Howlett said. “He is able to take a tackle; he doesn’t get involved with the away-from-the-ball nonsense. We are expecting good things out of him. He is going to be targeted now more and more as we go along in the season, but he is more than capable of dealing with that.”

The game against Nazareth was a one-sided affair as three Bengals – Sarr, Pavone and sophomore Devonte Black – all scored while Banahene was perfect between the pipes for the second consecutive game.

Buffalo State finished their opening week by competing against RIT this past Sunday. The Tigers gave the Bengals their strongest challenge of the still-young season as they outshot the Buffalo State 15 to 7. But the Bengals stayed strong and took advantage of their opportunities. Pavone scored his second and third goals of the season to lead the Bengals to a 2-1 win. RIT’s lone goal came on a penalty kick in the 54th minute.

“It feels very nice,” Howlett said. “There is nothing better than being undefeated after three games. [The defense] is what we have been working on this year. That was our main push coming into this.

“We’ve got to concede less goals than we have done over the past two years and we still haven’t conceived a goal in open play. So I am very happy.”

Rightfully so, as Howlett has coached Buffalo State to their first 3-0 start since 2011.

Buffalo State continues its road stretch with only one home game between now and Oct. 3.

The Bengals will play in the Fredonia Classic on Sept.11 and 12, where they will face Baldwin Wallace at 1 p.m. and Penn State Behrend at 4:30 p.m.