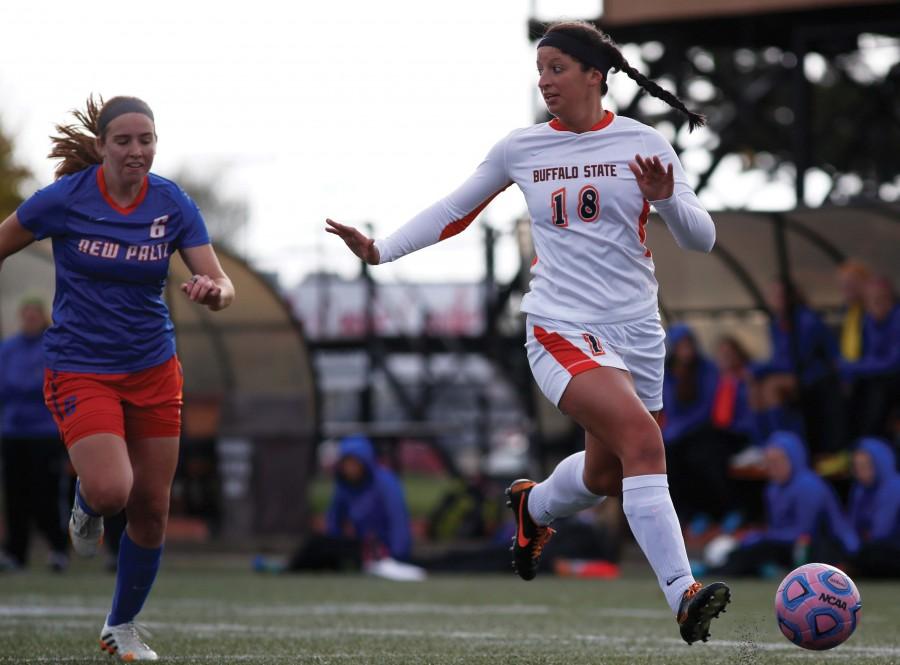 After a season of ups and downs, the Buffalo State women’s soccer team looks to take advantage of losing only two seniors to graduation and returning the core of its team.

The team hopes to advance past the semifinals, having lost in the semis three of the last five years.

Buffalo State shined on the defensive end last season and was a force, allowing only one goal or fewer in 17 of its 20 games. This season, the Bengals look to continue with their defensive success.

“Our tactics on the field aren’t going to change much,” head coach Nick DeMarsh said. “I am a defensive-minded coach. I believe that defense wins championships. Offense gets people’s attention, but if you want to win the big games, then you have to not concede soft goals and that’s how we built the program over the years.

“You will see change in the development of the freshman talent that we had, now with a lot more experience and better understanding of what to expect.”

“I’ve been pretty pumped since last season ended,” Boldinski said about this upcoming season. “Not only because this is my last year to do what I can, but also cause of how talented our team has become.”

Junior midfielder Katie Shaw is overcoming a partial tear in her ACL and feels “pretty confident” coming into the season.

“The fact that we made it to the semis last year and lost 1-0 against Cortland, and I think we are still bitter about that loss,” Shaw said. “I think we want to go far and I think everyone is ready to make a statement to the conference.”

As freshmen, midfielder Breanna Knight and forward Tianna Hatch were first and third, respectively, in points last season. Coach DeMarsh believes both players have high upside and will be impactful in the coming years.

“Both of them had their ups and downs during the season,” DeMarsh said. “There’s a big learning curve for pretty much every player when they play college soccer. So if they come back fit and motivated, I imagine that they will continue to do well. Knight takes a leadership role with a lot of our dead ball situations and set pieces.

“Hatch is a great athlete with huge potential and she has great speed. I think she was disappointed with her goal output last year just because she made so many chances and scored so few goals. She has some proving to do.”

Being a senior, one would understand that this is their final full season to play. Boldinski wants nothing else but to win.

The Bengals start off their season with a home game at Coyer Field on Sept. 1 versus Elmira.

“The season could be about momentum and we want to do well,” DeMarsh said. “Elmira has a new coach and I am sure he will bring a lot of energy and a lot of new organization to their system. It is always interesting when a new coach goes into a program, so we don’t really know what to expect from them.

“Elmira will be tough; they will be a good challenge. They are not predominately a powerhouse program, but they always have good players. I think it is always important to win the opener, but for me it is about winning every game that we can, doing the best we can whether it is the first or the last game.”

Shaw emphasized the importance of home-field advantage and hopes that the fan output will be good.

“We are ready to make a statement,” Shaw said. “If we can get support and get more fans out there that would be great, but Buffalo State women’s soccer team is ready to make this year a great one.”