Innovation begins on the runway 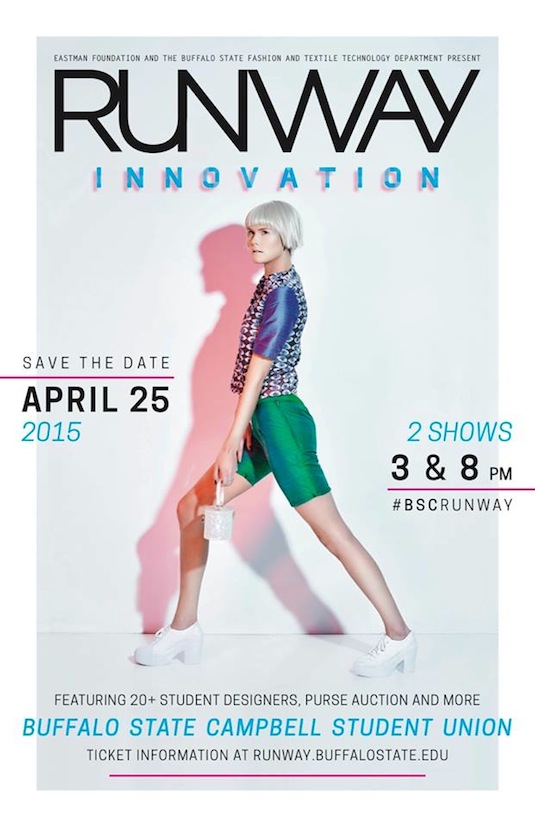 Despite the 45-minute technical delay experienced at the 3 p.m. show, Runway 8.0 delivered a fashion show with multidimensional use of media creating an interactive experience. Inspired by SUNY Buffalo State’s Year of the Innovator, Runway’s theme this year was Innovation.

Upon walking up the stairs to the second floor of the Campbell Student Union, there was an obvious transformation. A Runway media backdrop and photographer allowed for photo-ops and the Fireside Lounge became the VIP area. Once inside the Social Hall, a large runway with a stage full of intricate design and neon lighting set the mood for the event.

Fellow students, supporters and family members trickled in, filling in most of the Social Hall’s seating arrangements. The fashion textile technology (FTT) department at Buffalo State encouraged audience members to regularly update social media throughout the show using the hashtag #BSCRunway and the tagline “Instagram the glam.”

Senior journalism major Colleen Young emceed the afternoon’s event opening with gratifications and acknowledgments of what Runway does for Buffalo State. Last year’s show raised over $25,000. High school students were invited to attend this year’s show and the school with the most students in attendance was awarded a $500 scholarship to give to a student of their choice. If that student decides to attend Buffalo State, the scholarship is doubled.

With four other departments collaborating with FTT, Runway 8.0 was a great example of the unity within the Buffalo State community. Hospitality students hosted the VIP party at the Fireside Lounge, while the media production COM 434 class, working with Instructional Resources, held students responsible for taping the show. The music department’s digital production program provided music.

“Basically, the videos were used to sum up the designers’ inspiration, the materials they used, anything they really want to get our there about their line. That was their chance,” she said. “We met with the designers before their interviews and they showed us their lookbook and photos and told us what they wanted, but we helped collaborate.”

In Runway 8.0’s program, Assistant Professor of Communication Design Brent Patterson commented, “Sometimes, it’s okay to invoke chaos and employ randomness, then edit the results into something meaningful. Digital technology allows countless new forms of expression and artistry, but does not make creativity any easier; it just gives us more choices.”

Almost 50 designers and models were featured in this year’s show. Designers found their inspiration from nature to medieval armor and dragons to lingerie inspired dress wear.

“I wanted to design a collection that would stand out and be memorable with this being my last semester at Buffalo State College,” she said.

“When I stood backstage watching the live feed of my models first hitting the runway, I was extremely nervous. The audience’s perception of my collection was important to me and of course my models walking the runway without stumbling.”

She explained that a lot goes into preparing for a show like this as a student designer and how she created her collection. Starting out the process in early December, designers presented thirty preliminary sketches to the senior project professor, and of these 30, four final sketches were chosen as their Runway collection.

“The spring 2015 semester consisted of recruiting models and collecting those models’ measurements by using the body scanner located in the Fashion Department,” Harris said. “From these measurements, I created clothing patterns from scratch based on the sketches for my collection. The fabric that was used in my collection was designed by myself and printed using Spoonflower.com. After I received the custom printed fabric, I went into constructing the final four garments that were shown in my Runway 8.0 collection.”

Morgan Snow, a sophomore double majoring in fashion merchandising and communication studies, spoke about the difficulties with the 3 p.m. show.

“I honestly feel as though the show needed to be practiced a little more,” she said. “There were many hiccups. The show started almost an hour late and it just seemed like nothing was synced up for the show to run smoothly.”

Erin Habes, a lecturer in the FTT department and producer of Runway 8.0, apologized during the delay, thanking the audience for their patience, stating, “This is a student run show, these things happen.”

Overall, Runway 8.0 highlighted the way parts of Buffalo State works together to produce something unique for students and the surrounding community.

What will they come up with next year?