Take Back the Night: a night of art to confront the issues of sexual assault 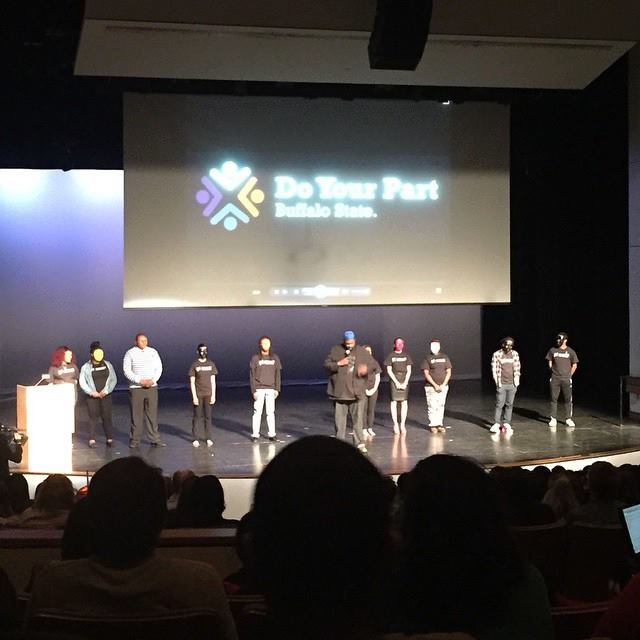 Rockwell Hall filled with emotion as victims and advocates got ready to speak out against sexual and domestic violence. The Buffalo State community bled teal with yesterday’s event, Take Back the Night.

Started in the 1970s, Take Back the Night (TBTN) became a worldwide theme of speaking about the issue of sexual violence. Through spoken word, poems, songs, and dance, TBTN becomes an artistic outlet to those who once were voiceless.

Weigel Heath Center’s Wellness and Prevention Coordinator, Paula Madrigal, worked on planning this event. “I was nervous, it’s a very sensitive topic,” she said. “Nobody think it’s going to happen to them. It is really incredible to see the Buffalo State community pull together for such an important topic.”

Addressing the way this issue effects college campuses and how to become a supporter of victims became themes of the evening. Vice President of Student Affairs Hal Payne and Dean of Students Charles Kenyon both spoke on behalf of Buffalo State, explaining how the campus has been responding to the loud conversation both our federal and state government have been having about sexual assault. The college has just revised its code of conduct to “provide greater protection for victims of sexual violence” according to Payne.

The night opened with Stacey Branchini, mother of an assault victim, and spoke about the way it has had an effect on their family. Her daughter, a student at Boston College, had a man break into her dorm room and hold her at knifepoint. She spoke on about her foundation It Happened to Alexa and sparked a conversation on how to support a victim. Her daughter was one of many victims who had to relive the night that changed their life in front of a courtroom, thinking, “what if they don’t believe me?”

Branchini stressed, “the three most important words in your vocabulary when speaking to a victim are ‘I believe you’ not ‘how did that happen?’ or ‘what were you wearing?’ or ‘were you drunk?’ just ‘I believe you.’” The It Happened to Alexa foundation looks to support victims’ costs during court cases including hotel stays and airfare. She addressed another point about consent stating, “if fear is in the room, consent is not.”

As the night continued, different performances addressed the issues within our society. Songs like “The Dark I Know Well” from the musical “Spring Awakening” and “Shake It Off” by Florence and the Machine were sung. In the context of TBTN, the lyrics held their highest form of artistic power. In “The Dark I Know Well” a line says, “I don’t scream ‘cus I know it’s wrong. I just play along.”

The contemporary dance titled “A Drug Called Love” heightened the idea that not all sexual abuse is about consent and rape culture; it can be about domestic violence. This performance showed the transition from love to a toxic love, a yearning to stay with someone, to go back to them over and over, even though they hurt you once already.

“I wanted to come out tonight because I wanted to hear people’s personal life experiences,” said Kristen Corban, a senior psychology major. “I’ve always loved dance and I could really tell the story through the dance movements.”

When the survivors came out on stage to share their stories though, the sense of community and support radiated throughout the room. Three young women shared their experiences, masked before they were ready to speak. The last story was spoken through the woman’s knotty throat and sniffling tears away.

“Rape is a funny thing,” she said. “You lose a piece of you that you don’t get back.” Having a few instances where she had to pause, the audience’s applause as acted as immediate encouragement to continue.

Cory Fletcher, a junior criminal justice major with a minor in deviance, gave a male’s view on what it was like to be in attendance at TBTN. “My frat brother actually danced tonight. I felt like it was very touching. It not only brought awareness but it brought emotions,” he said. “I feel more caring about the subject and emotional towards how to react with one of my friends if it happens.”

Buffalo State is currently has a “Do Your Part” campaign and brought Darnell Barton to campus, the bus driver who stopped to help a woman from jumping off the Scajaquada highway bridge earlier this year, to speak on how this can be done.

“When we talk about sexual assault we say, that’s a girl problem, or that’s a college problem, but that’s not true. You see it’s an all of us problem,” he said pointing out to the audience.

“Tonight every syllable of every poem, every note that was sung, every movement of every dancer’s body was a challenge. It was a call to arms, and it says its something we need to deal with. It’s time to take back the night. I did my part, I did not do your part.”