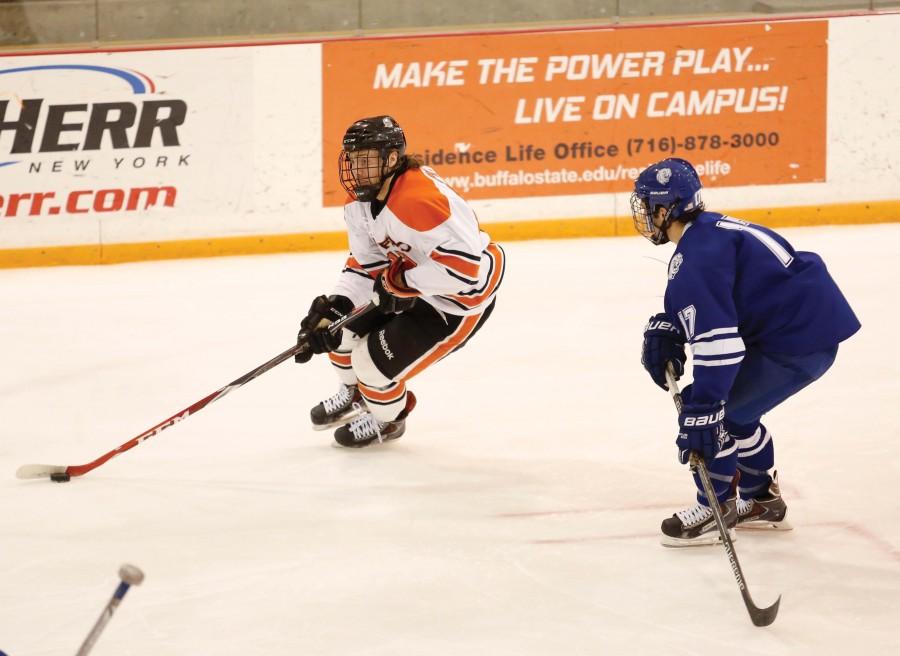 Sophomore Taylor Pryce had two goals and an assist in a 4-4 tie against Geneseo.

The Buffalo State men’s hockey team won just one of their first nine games to start this season. On Saturday, they came just one goal short of going into the SUNYAC playoffs as the third seed.

The Bengals were primed to compete for third place on Saturday evening at home against Geneseo, on a four-game win streak, and after a huge third period saw them beat Brockport, 4-1, the night before. In a back-and-forth contest where both teams responded with immediacy after every goal, the game ended in a 4-4 tie.

Buffalo State (11-11-3 overall, 7-6-3 SUNYAC), and will travel to fourth seeded Potsdam on Wednesday as the fifth seed for a 7 p.m. quarterfinal matchup. The draw against Geneseo dropped Buffalo State down two spots and cost them a home ice advantage.

Despite the missed opportunity, the level of confidence in the Bengals’ locker room is still high, and they look to get back on track and continue the success they’ve seen in recent games when they travel to Potsdam.

They may not be playing at home on Wednesday, but the Bengals have no choice but to appreciate the fact that they’re in the playoffs after a very poor start to the season. Early on, it looked as though this season would be a rebuilding year after the departure of their All-American goalie, Kevin Carr.

“I honestly didn’t [think we’d be here],” Pryce said, remembering where his team was in early December. “We had a chance to get third place and we’ve never done that. It was a rollercoaster season with a tough schedule. We’re just glad it worked out.”

The Bengals clawed their way back, taking a few big losses in stride and learning from them rather than getting down on themselves.

“We had such a rough start that we had nowhere to go but up. After playing some top teams, we learned from them, we changed our game and it worked for us,” Pryce said.

Head coach Nick Carriere reflected on some of the tough losses early on in the season and feels the end result of the regular season is a testament to the resilience of his team.

“You know, I think it was us getting a big reality check going down to St. Norbert and really getting beat up on a couple times down there, seven nothing and eight nothing,” Carriere said. “It was a long trip; it was a long ride home to reflect on how that team played and I think that was very eye-opening for our group that we had to play a certain way.

“Very shortly after that trip, we got shut out again against Brockport and I think it would have been easy for us to pack up our bags and just stop trying. But our guys were resilient and had a great effort against Geneseo, and I think that really got us going and got us believing that we can beat anybody. I think that’s the biggest lesson we’ve learned this season.”

After being shut out 3-0 by Brockport on Dec. 5, the Bengals bounced back to defeat Geneseo, 3-2, the next week. That win was the start of their first good stretch of the season, as Buffalo State would win three in a row and four out of six games, they wouldn’t have a better streak all season until the last two weeks of the season.

On Friday, the Bengals took on Brockport at the Buffalo State Ice Arena. The contest remained scoreless through the first 40 minutes. The Bengals then exploded in the final 20, scoring four third period goals.

“We had some guys take advantage of some great situations and execute,” Carriere said. “Our goaltender, DeLaVergne, played great. Our defenseman cleared away a lot of the rebounds. We kept their chances outside the dots and to the exterior, and that was a big part of it.”

Brockport outshot Buffalo State 25-11 throughout the first two periods, but couldn’t find the back of the net until the third. Freshman forward Jason Zaleski opened the scoring for the Bengals on a shorthanded goal. Brockport answered right back less than three minutes later, but Buffalo State took control of the game from there, scoring three more within just five minutes. Hope tallied his ninth of the year, Nieminen tipped in his fourth, and Salkeld registered his 13th goal of the year to give the Bengals the 4-1 victory.

The Bengals were outshot 41-18, but took advantage of their opportunities and were backed by a strong performance from DeLaVergne, who made 40 stops. Buffalo State was 0 for 2 on the power play and held off all six man-advantage opportunities for Brockport.

On Saturday against Geneseo, Buffalo State was chomping at the bit to get ahead early and secure home-ice advantage for the quarterfinals.

The Bengals scored twice on their first three shots, both off the stick of Taylor Pryce. Pryce’s first goal came 3:52 into the game on an empty net set up by a misplay on the part of Geneseo’s goalie. The Knights responded with a goal of their own just over a minute later, but Pryce gave the Bengals the lead back two minutes after that to put his team up 2-1 on the power play.

Geneseo took advantage of favorable calls and took their first lead of the contest after a pair of power play goals. Their lead lasted just 35 seconds before freshman defenseman Marcus Michalski netted his second of the season to even the score at 3.

Things tightened up after the first period. Geneseo continued their dominance on the power play, netting their fourth early in the second period. Nieminen scored in a second consecutive game, netting his fifth of the season midway through the second and completing the scoring.

In the third period, several impressive stops by DeLaVergne kept the Bengals pushing for the No. 3 seed, but they couldn’t manage to score the clincher. Buffalo State pulled their goalie in a last-ditch effort with 50 seconds left to play, to no avail.

“We played a good hockey team in Geneseo and it was a tight, back-and-forth kind of game,” Carriere said. “We showed a lot of resilience, getting the momentum back every time a goal was scored.”

The Knights outshot the Bengals, 32-27, and were 3 for 6 on the power play. Buffalo State continued a season-long trend of weak power play performances, netting just one goal on six of their own odd-man opportunities. Sophomore forward Jake Rosen registered three assists. DeLaVergne made 28 stops.

The Bengals have hit their offensive stride as of late, and are seeing guys on all four lines get in on the scoring. 10 different players have scored for the Bengals in their last five games. The team knows this trend has to continue if they want to be successful in the SUNYAC playoffs.

“It’s nice to see all lines firing, which is huge, because that’s what it takes to win,” Pryce said. “I mean, you look at the great teams, they’ve all got four lines scoring. If we’re right there with them, then we can play with them.”

Buffalo State goes into Potsdam with a 4-0-1 record in the last five games. The Bengals fully believe they’ll be moving onto the semifinals.

“The confidence level is high,” DeLaVergne said. “Everyone gets up for playoff hockey.”